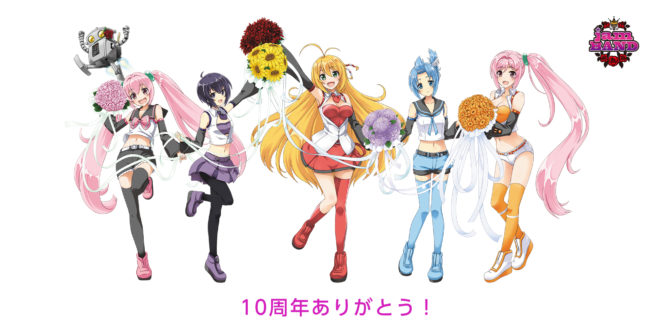 December 2017 was a big, big month for all of AHS. From multiple anniversary celebrations to collaboration announcements, major developments in ongoing projects, and even the debut of a new voice synth, few VOCALOID news agencies would dare try to cover it all, but that’s where VNN steps in! Following part 1 of our news coverage about VOCALOMAKETS, we now talk about the rest of the AHS products that made headlines towards the end of 2017! 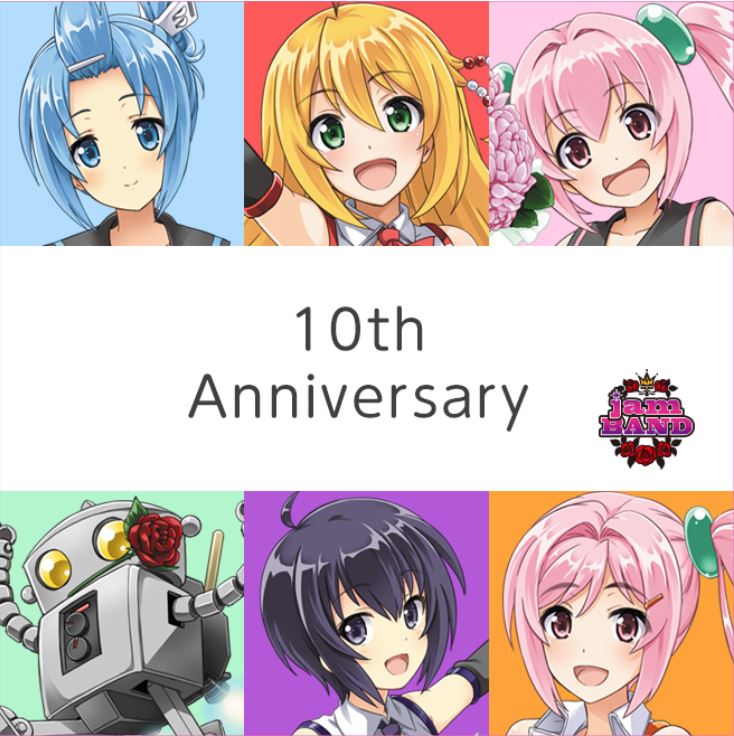 Not to be outdone by VOCALOMAKETS’s year-end livestream celebrating Yuzuki Yukari‘s 6th anniversary and Kizuna Akari’s release, AHS held their own final livestream of 2017, hosted by AHS president and CEO, Tomohide Ogata, designer from MARS16, less Kitayama, and famed singer-songwriter and VOCALOID producer, EHAMIC. The livestream took place on on December 21st, 2017 to celebrate yet another major anniversary: the 10th anniversary for their music-making software, jam BAND! 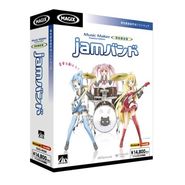 Released on December 21st, 2007, jam BAND was created and released as part of the AHS’s Music Maker lineup, and as a compliment to VOCALOID2, which was rapidly rising in popularity. Since VOCALOIDs can only sing, but not play music to accompany their vocals, many new users also wanted a DAW product to create music with, which AHS answered the called to. Like VOCALOID products, jam BAND products also feature character avatars for each of their instruments.

jam BAND started out modest with only three members: Tsurumaki Maki on guitar (who also became a VOICEROID), Amane Kana on bass, and Tsutsumi Rhythm on drums. However, subsequent updates added Tsutsumi Kanon on keyboard, Robota as a band mascot who can also transform into a chair, and Mitarashi Mary as the band’s newest guitarist.

Speaking of Mitarashi Mary, AHS has also just completed and released her voice samples for free download! Each jam BAND member is also provided with a voice to give them a personality and help bring them to life, something not seen in other DAW products. Mitarashi Mary is voiced by Yuina Ito, and you can download and listen to her voice samples for free by clicking here. 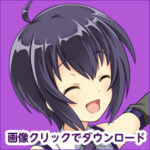 Furthermore, AHS has released jam BAND-themed LINE stickers for purchase on the LINE Store! The sticker set contains 40 adorable stickers for all six jam BAND members for just $0.99! You can find and purchase them here!

Finally, rounding out the jam BAND 10th anniversary celebrations is the release of Racing Maki, a new official design for Tsurumaki Maki! Since Yuzuki Yukari now has an official racing version, AHS was asked by many fans why Maki doesn’t have one as well, and thus Racing Maki was created. 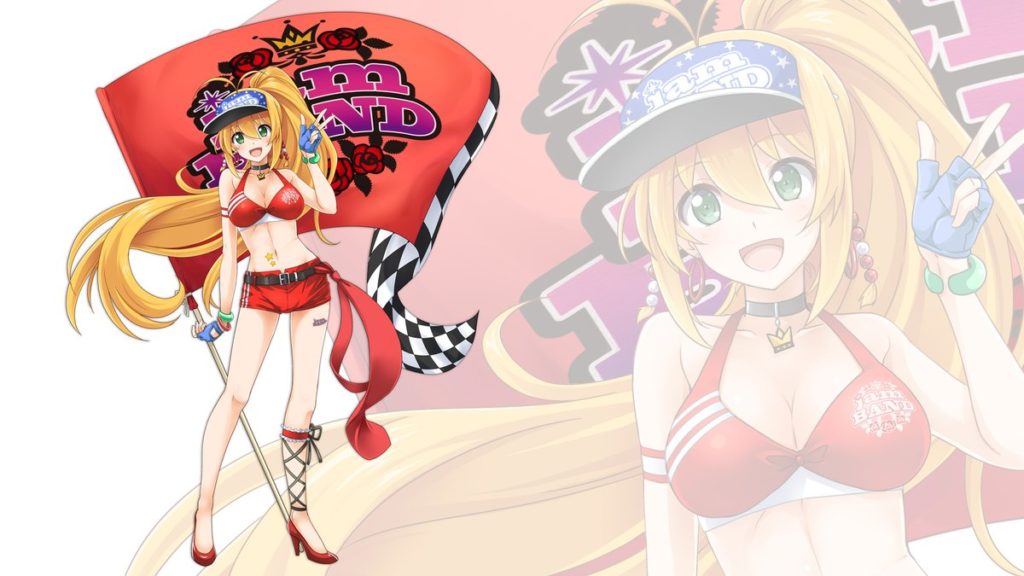 Ogata stated during the livestream that J.I.O Create has already offered to create itasha and itabikes for Racing Maki, just as they have been doing for Racing Yukari! Ogata also noted that there were comments made during the livestream that called for a Racing Maki figure, but explained that fans who desire one should be contacting and asking figure-making companies like Be-Full and Good Smile Company in order to make that happen.

You can download all 12 variations of the official Racing Maki illustration for free by clicking here.

Once it was all said and done, the hosts presented and treated themselves to a lovely jam BAND cake, decorated with the 10th anniversary illustration provided by 梅谷阿太郎 (Ataroo Umetani), the official illustrator for all jam BAND characters.

You can click here to visit the jam BAND 10th Anniversary page for a summary of all the above announcements! 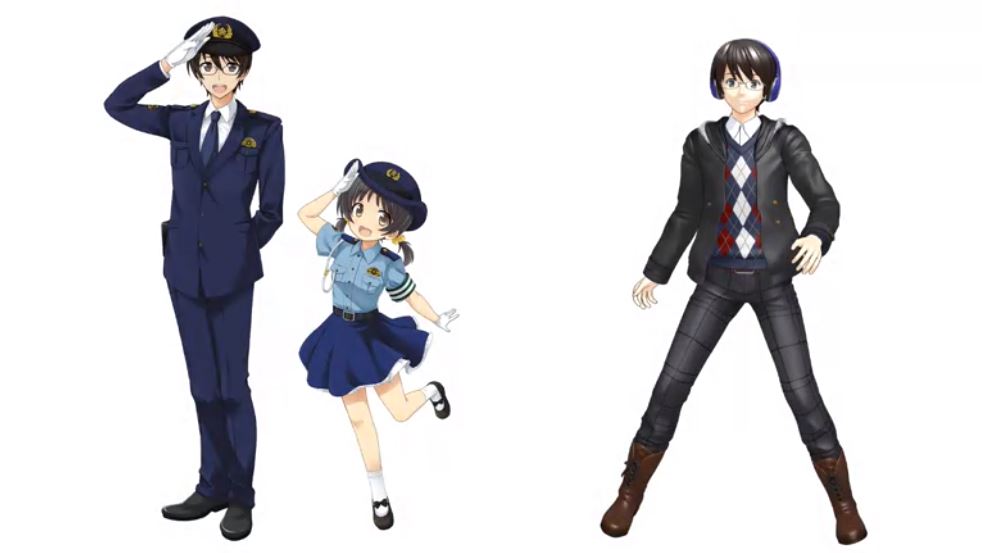 AHS took the time during the livestream to remind everyone how it was also the 8th anniversary for Hiyama Kiyoteru and Kaai Yuki on December 4th, and that the special police version artwork and official MMD model that we previously covered are now available for download on their free downloads and Charamin Store pages.

This was also an opportune time to remind fans that LINE Stickers for Kaai Yuki, as well as those for their Frimo mascot characters – Frimomen and his friends – are also available on the LINE Store. You can find the Kaai Yuki LINE Stickers here, and the Frimomen stickers here. Both sticker sets are $0.99 each. 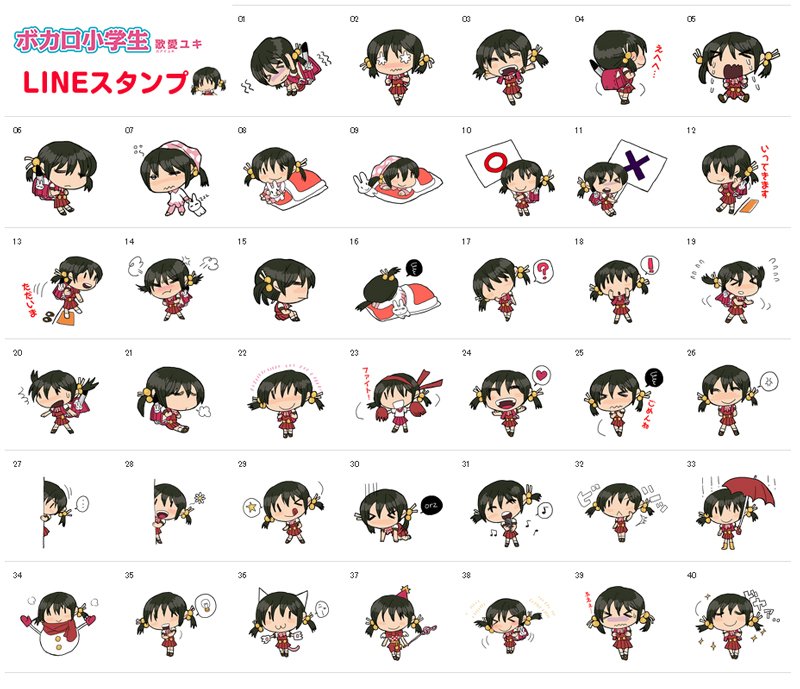 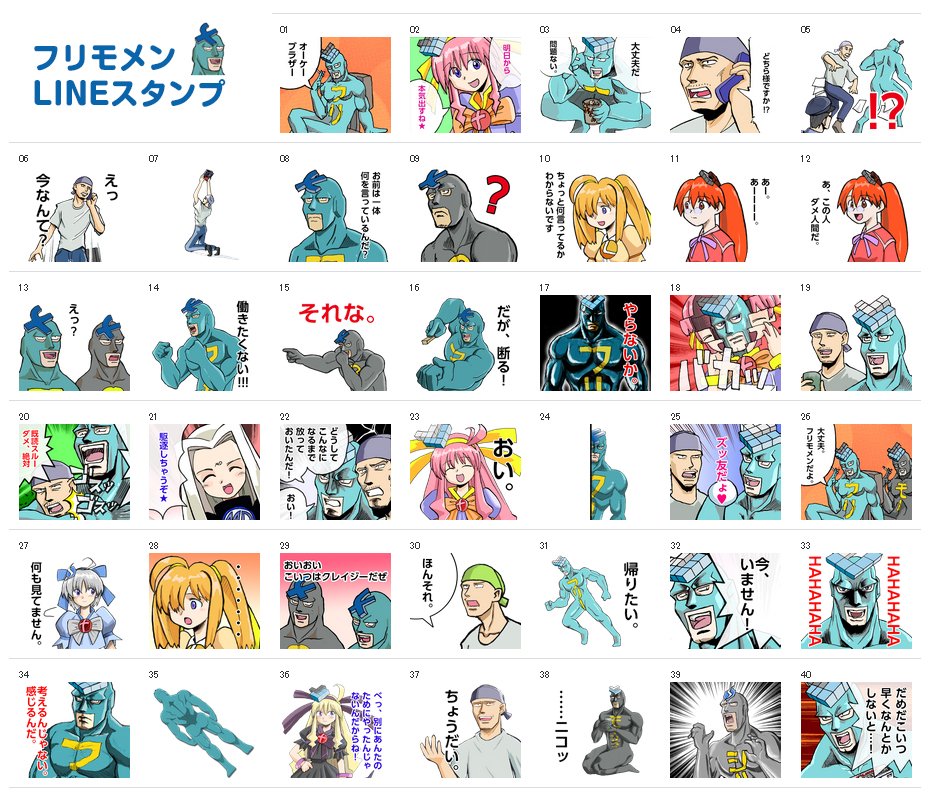 VNN readers may remember the crowdfunding campaign to fund Tohoku Itako‘s VOICEROID2 bank, and the unprecedented success that it met with. On December 11th, 2017, the campaign concluded with ￥23,841,000 JPY (about $214,800 USD) raised, more than five times it’s original goal! It was confirmed during the livestream that production of VOICEROID2 Tohoku Itako has begun, and will be developed with all the stretch goal additions (3 extra voice styles and 450 new voice samples) included.

To further celebrate her success, brand new Tohoku Itako LINE stickers from 卯匡 (Ukyou) have also been released on the LINE Store! You can browse all 40 stickers of the eldest Tohoku sister and purchase them for just $0.99 here!

Speaking of successful crowdfunding, the Campfire campaign by Glassworks MOVE for glass cups with Tohoku Itako and Tohoku Kiritan etchings also concluded in December 11th, 2017, with a total of ￥407,000 JPY (about $3,683 USD) raised, 162% of their initial ￥250,000 JPY goal. Following their successful funding and release of the Tohoku Zunko glass cups, the craftsmen at Glassworks MOVE knew that they would like to complete the Tohoku sisters trio in their product lineup, and started the new crowdfunding campaign almost immediately.

The cups are about 64 mm (about 2.5 in) in diameter and 110 mm (about 4.3 in) tall, and will be available for online purchase for ￥2,500 JPY (about $22 USD). You can visit the crowdfunding page here, and visit Glassworks MOVE’s official Twitter account here for work-in-progress images of the cups.

Finally, rounding out the Tohoku news for December 2017 is the announcement of the Tohoku Zunko and Tohoku Kiritan mini figurines from PLUM! These tiny little figures stand at just 65 mm (about 2.5 in) tall – small enough to fit in the palm of your hand – and are scheduled for release in February, 2018, for ￥800 JPY (about $7 USD) each, plus tax.

You can keep an eye on their product page here, and expect updates from VNN as their release approaches. 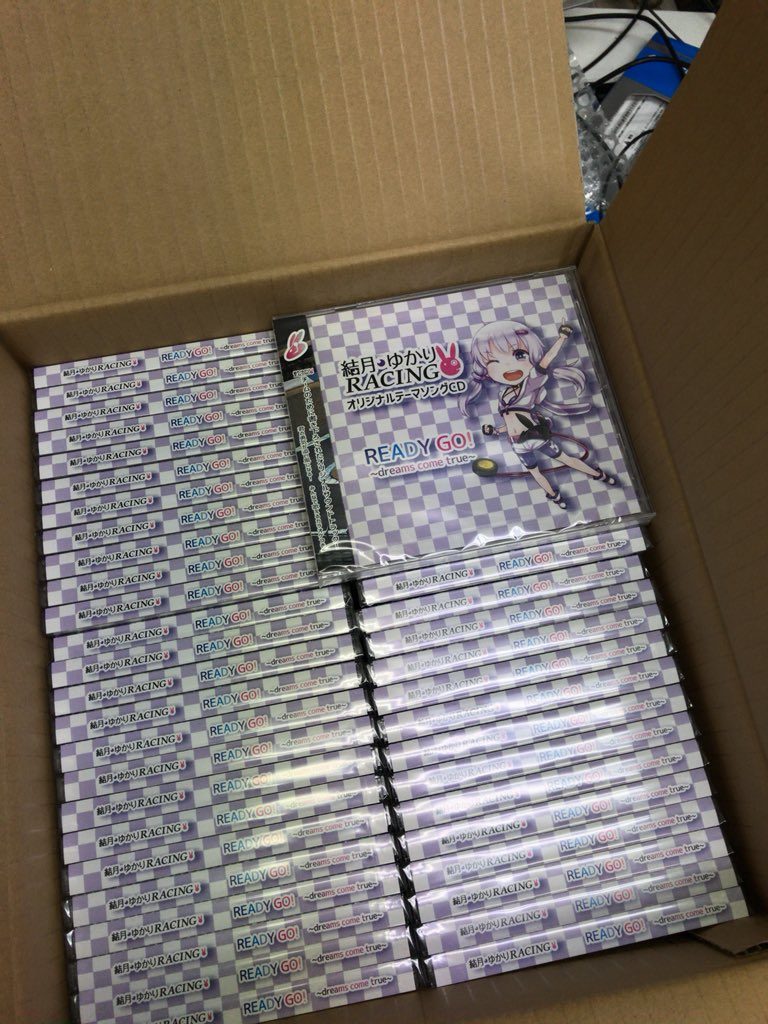 In related AHS news, the Yuzuki Yukari Racing Project was working overtime towards the end of 2017, attending both THE [email protected] [email protected] 38 and Winter Comiket 93. At each convention, they were selling their usual wares, plus a brand new product: the CD containing the Yuzuki Yukari Racing official theme song, “READY GO! ～dreams come true～”!

See below for a tracklist of the CD and sample of the song:

Should the CD tracks ever become available online, VNN will report on it.

About halfway through the livestream, the hosts took a look back at all the news and developments that occurred at AHS throughout 2017, which was an extremely eventful year for them. We summarize all the voice synth-related news below:

Finally, a surprise announcement came towards the end of the livestream when Ogata announced the possibility of another new VOCALOID from AHS (besides Kizuna Akari) being released sometime in 2018. This VOCALOID is supposedly one that has been in development for quite some time now, ever since the V4 updates of all their previous VOCALOIDs have been completed. They aimed for a release in 2017 that ended up not happening, but Ogata stated that they now believe that they will be able to complete and release this new mystery VOCALOID sometime after Kizuna Akari’s release, provided that Yamaha approves.

The only thing that we know for sure is that it is not the public release of the long-fabled “Ogata-loid,” a theory that Ogata himself shot down immediately after the announcement.

VNN will watch this story closely and report on any updates on AHS’s newest VOCALOID addition.

This completes VNN’s news roundup for AHS’s final month of 2017, which was no doubt one of their busiest months ever. Stay tuned to VNN throughout 2018 as we continue to follow all of their exciting voice synth news and developments!

Hello! You can call me Marumain, and I serve as a translator between VNN in English and VNN in Japanese, translating articles between the two languages. I love pretty much every Vocaloid, though I consider MAIKA to be my favorite!
@MarumainElectro
Previous KAMIJO x Hatsune Miku Vampire Fest Collaboration Store Now Open
Next MAIKAVERSE Album Review