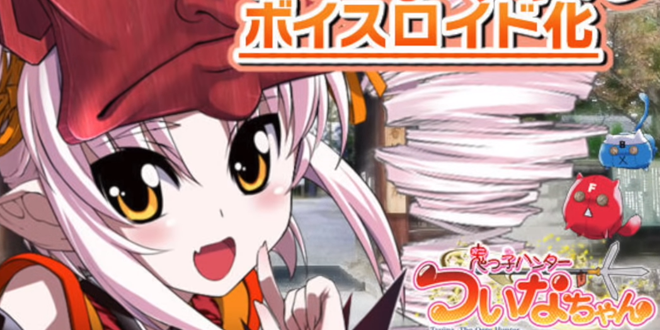 Crowdfunding for Tsuina the Ogre Hunter to Become a VOICEROID!

You may remember about Tsuina the Ogre Hunter, the character voiced by Mai Kadowaki that was announced to get a chance to become a VOICEROID, just like the Tohoku sisters did in the past, thanks to a crowdfunding campaign. Well, this cute little character has launched her campaign via Greenfunding and she needs our help to reach her goal!

In case you don’t know her already, Tsuina the Ogre Hunter is a 14-year-old ogre hunter who always tries exorcising ogres during the Setsubon season, unfortunately often resulting unsuccessful. Her character was created by Saki Oohenri, the same creator of Hinomoto Oniko‘s meme (You may know also Oniko as the character from the song “HAKUMEI” composed by azuma. She previously used VY1 as vocal, then became an UTAU on her own). Tsuina is voiced by Mai Kadowaki and her fan and supporter can contribuite to her projects by donating money to her. Contributors to her project would receive her voice dramas files, her manga and a lot more. Tsuina became popular over time and even started promoting traditional Japanese culture and ceremonies!

Here below you can check her introduction video out!

Not long ago, Tsuina’s official Twitter account announced she would start a crowdfunding campaign in order to make her a VOICEROID voice bank. AHS Co. Ltd was enthusiast to confirm the project, but without any  further information about it. Now they finally launched her Greenfunding Campaign, with a stretch goal of 4,800,000 JPY. Tsuina will get a standard Japanese voice bank by default, but they may also be able to add an additional voice bank with Kansai dialect in case this crowdfunding is a success!

Everyone can donate money to the campaign by choosing a specific Course. Based off of the the course you choose you will receive different prizes! Check them out below!

At the moment this article was published the crowdfunding reached a donation amount of 4,466,000 JPY, getting closer and closer to it’s actual goal! Are you interested into donating to the project and let Tsuina finally become a VOICEROID? You can do so from her crowdfunding’s page on Greenfunding, it will end on February 20th at 11:59 PM JST so make sure to support the cause before the crowsfunding ends!

We cannot wait to hear more of Tsuina and her activities! Meanwhile, make sure to check out her official social medias, and remember to stay tuned with us for all the news about her!