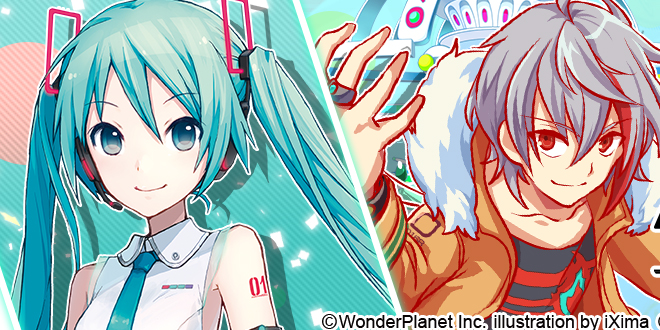 Please note that at the moment, the Miku collaboration’s return has only been confirmed for Crash Fever’s Japanese version.

The events, much like many Miku mobile game collabs, feature special music sung by Miku during the event periods. However, Crash Fever takes things up a notch and includes original music in their Miku collabs as well! While previous Snow Miku quests feature the official Snow Miku song from the current year, Crash Fever‘s creators also employ VocaloPs to make original songs as well. Last year, fans of the global version got a taste of tilt-six‘s work in the game!

The global event featured lots of different units to collect and “Bug Max,” as well as several Hatchers that gave fans a chance to grab all the Crypton VOCALOIDs. You can find coverage of Week One here and Week Two here.

The event is set to take place in late January in order to coincide with the Snow Miku 2018 festival, though with no specific date given yet. At the moment, there’s no news on when or if the event will have a global release as well. However, considering the success of last year’s event, there’s quite a good chance for a return!

Details on the event are currently scare. There’s no word on which units and quests will be returning, but Wonder Planet, the creators of Crash Fever, have said there will be returning elements as well as brand new ones. Below is the breakdown of what the current press release has revealed.

Just like in previous years, a limited Snow Miku unit based on the newest Snow Miku design will be featured! 2018’s design, based on the “Snow Animals of Hokkaido” concept, will most likely be available through a limited time quest.

In addition, “Duo Units” made up of a pair of VOCALOID characters like Rin & Len, and Miku & Luka will be available as well. It’s unknown at this point what these “Duo Units” will be.

There will also be 6 Star Awakenings available for previously released units. This may hint at 6 Star versions of the KAITO and MEIKO units.

Finally, some limited-time quests from previous events will be re-released during this year’s event!

Featured illustrators for the collaboration units include:

There will be both new collaboration quests as well as re-releases of quests from previous collaboration events. No matter how far you managed to get during the previous Miku event, you’ll have something to do during this one as well. This also means that even new players to the game will have the chance to experience some of the quests from yesteryear!

As previously mentioned, Wonder Planet always goes the extra mile when it comes to the music featured in their collaborations. They’ve announced three producers who will be composing original music for the game! These artists are:

Fans who played last year say the chat commands turn Crypton crazy during the Miku collab. Since then, Crash Fever has made some upgrades to their chat system and allows open chatting in the waiting room before the quests start. This open chat also has chat stickers (much like stickers in LINE) that act as quick and easy-to-access emoticons. These stickers will go Miku themed as well during the collaboration!

During the collaboration period, players will get treated to a special Miku version of Fever Mode, during which fans will be able to hear Miku’s voice as they hit the panels!

For more information, be sure to stay tuned to VNN. We’ll be sure to reveal details as they come. If the event does go global, expect in-depth coverage as Hoshi has been playing Crash Fever for almost a year now and will be able to play most if not all of the events this time! You can also check out the links below for information on the previous event in the global version.

She's a huge VOCALOID fan, a figure collector, and an all around nerd. Hoshi's been in the VOCALOID fandom since 2008 and has been a hardcore VOCALOID fan since 2013.
@VocaHoshi
Previous Kagamine 10th Anniversary Prize Giveaway and Illustration Contests Announced!
Next Daihatsu Move Canbus Hatsune Miku Ver. Main Visual Revealed, Release Announced for Spring 2018