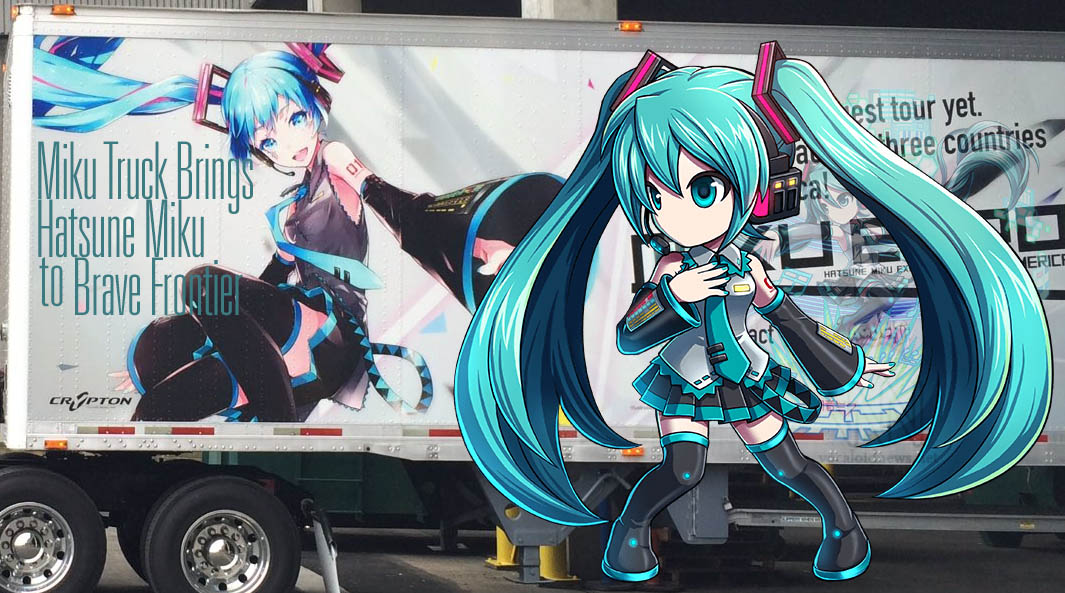 The #mikutruck as it’s being called (if you see it, be sure to take pictures and share with the #mikutruck hashtag!) is not only promoting Miku’s concert but also Miku returning to Brave Frontier for a limited amount of time! Starting from the first concert in Seattle on April 23rd and going until the second to last concert on June 4th (the last is on June 5th), Miku is available to fight in a special Vortex Dungeon in Brave Frontier!

The Vortex Dungeon is available in three different levels, each costing a different amount of energy and each giving a different drop rate for Miku. The more energy you spend, the more likely it is that you will get Miku. But the battles are more difficult as well!

In addition, the Vortex once again has music featuring Hatsune Miku’s voice. In celebration of Miku Expo NA, the winner of the Miku Expo Song Contest, “Ten Thousand Stars” by CircusP, is featured on levels 1-6. Level 7, where you face Miku, has different music from the other stages and the first time around. But this time, it’s oddly silent. Fans are guessing this is a bug that should be fixed soon.

Fans new to Brave Frontier can download the app for Android or iOS. Older fans can log back in and grab themselves a Miku!

If you manage to evolve Miku to her 5 Stars level, she turns into her Append. 6 Stars gets her to her V3 form!

It’s suggested that you work on leveling up or find some powerful friends to piggyback off of as the level requiring 10 energy has a very bad drop rate. If you’re new to Brave Frontier, spend a lot of time leveling up! It’s a great time to do so as Brave Frontier is also currently finishing up an event highlighting their newest addition to the global release of the game.

She's a huge VOCALOID fan, a figure collector, and an all around nerd. Hoshi's been in the VOCALOID fandom since 2008 and has been a hardcore VOCALOID fan since 2013.
@VocaHoshi
Previous Prototype Mini Figure Vsinger Diungkapkan!
Next Hatsune Miku: Cheerful Ver. Re-release Announced for Charity Figure, Preorders Now Open!