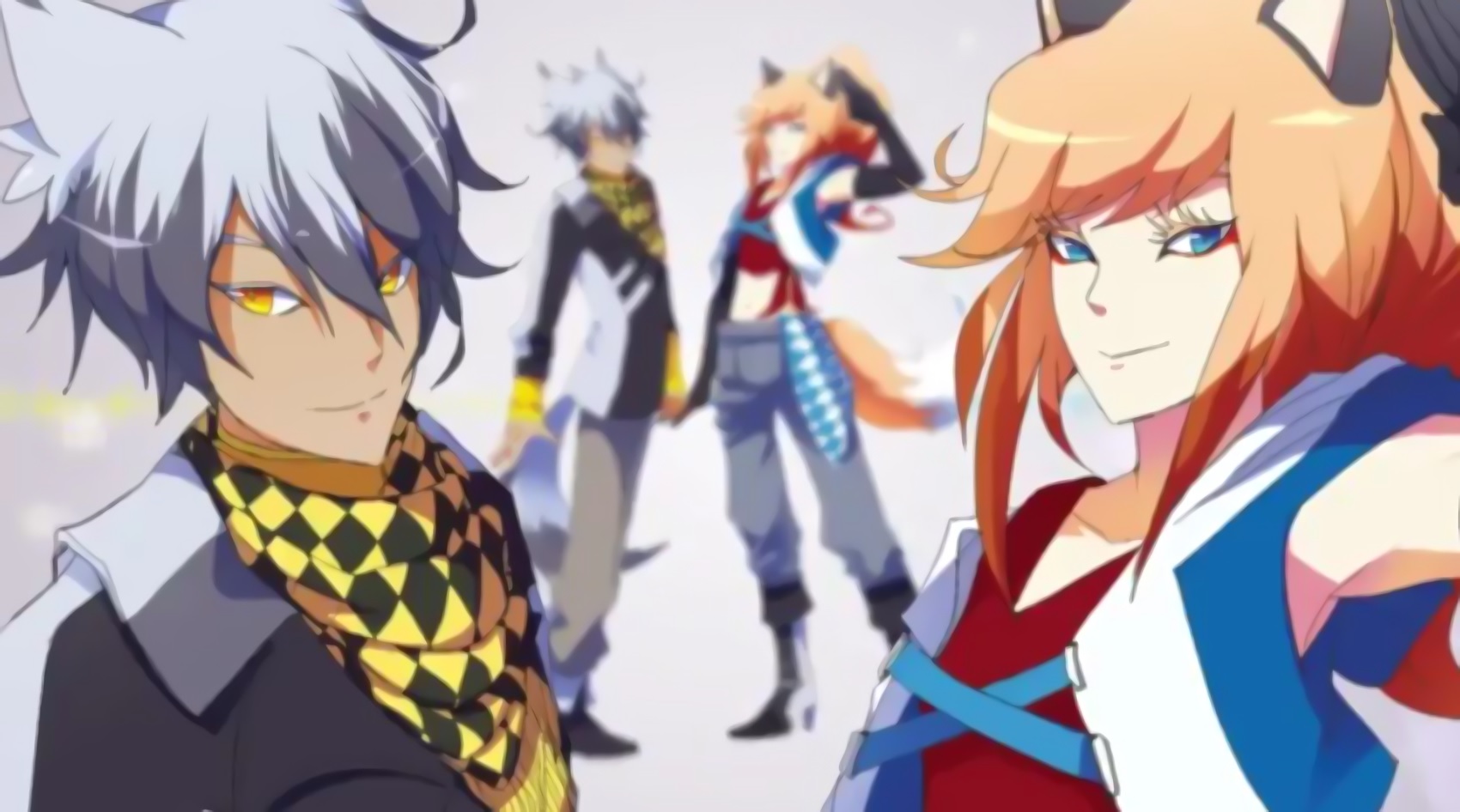 Earlier this week, we received an update on English VOCALOIDs Dex and Daina via a live stream hosted by EmpathP and Kenji-B. As many pointed out, the two voice banks were supposed to be released in the summer of 2015. However, due to difficulty communicating with YAMAHA, there has been a delay. This is very common with English VOCALOIDs and no one should worry.

Unfortunately, the stream was taken down due to the chat being filled with vulgar comments. However, EmpathP was kind enough to post a summary of the stream on her page.

Dex and Daina will have both a physical release and a digital download. At the moment, EmpathP and Kenji-B have yet to hear whether the voice banks will be bundled for physical purchase.

The digital release will have the voice banks downloadable separately. There is a possibility of there being a discount if both are purchased but nothing has been confirmed yet.

The final artwork has yet to be announced. Though the character designs are likely to stay the same, there is no box art available at this time.

In regards to price, everyone who worked on Dex and Daina are confident that they will be affordable. EmpathP suggests that the two banks will likely cost about $70 USD each. However, an official price has not yet been confirmed.

As mentioned in the opening paragraph, Dex and Daina were slated for a release in the summer. However, due to slow communications, things haven’t been as fast as fans would like. EmpathP says not to worry, however:

In regards to their delay, we deeply apologize for that, but again, it’s just continued difficulty in communication with Yamaha. I know that’s not what you guys wish to hear, but it is a fact that English Vocaloids are RARELY (if ever) able to give an EXACT date for release, as often times EVERYTHING is left pending until Yamaha replies back to correspondence. it’s no fault of their own, there’s many factors going into this (time differences, language barriers, ect.)

According to Kenji-B’s post on Vocaloid Otaku, they’re hoping that the banks will be released by the end of October.

EmpathP promises that she will keep fans informed. She’ll be posting information as soon as she can and encourages fans to stay positive even if Dex and Daina are delayed for any reason.

Dex and Daina have very different voice types, as mentioned before in the live stream that announced the duo.

Dex is a powerful vocal that is said to be easy to manipulate for multiple styles. Though he and Daina are both marketed as Pop vocals, Dex can easily perform Rock and even ballads.

Daina is seen as a type of mirror to Dex’s powerful voice. She’s breathier and huskier and can even sound soulful at times. Her breathy voice is very different from Avanna however, according to EmpathP.

It’s also been stated that Daina has a bit of a Southern “twang” that could be used to create Country music.

Avanna is also breathy but leans more on the side of soft and elegant while Daina is more assertive in her pronunciation.

EmpathP also talked about how Dex and Daina will work well together as well as how Daina will be able to do duets with many stronger vocals.

Together Dex and Daina create a marvelous balance, with Dex emphasizing Daina’s more sombre tone, and Daina reigning back Dex’s Power when needed. These two are going to be EXCELLENT duets (and I predict that those who purchase them will feel the same way). We also discussed how, due to Daina’s more soulful voice, she will be marvelous in duets with other more power-house vocals such as Ruby, Big-Al, ect.

The two will not be XSY compatible in the beginning. They may be given more voice banks in the future if they sell well.

They will, however, have Growl capabilities. EmpathP has stated she doesn’t particularly like their growls but admits she’s likely biased due to her general dislike of the Growl feature.

As soon as Dex and Daina are released, Kenji-B will release a song featuring them. At the moment, there are a few demos for Dex and one for Daina. Most were shown in the first live stream but there are now several demos uploaded to EmpathP’s and Kenji-B’s YouTube and SoundCloud accounts.

EmpathP explains the different new phonemes in her post. These phonemes are available for Ruby as well.

[4] Creates a subtle “t” or “d” sound for use in words such as “better”, “getting”, ect.)
[[email protected]] Is an American “a” sound which can be used in place of the phoneme [{] for words like “than”, “land”, “hand”, ect.)
[h] Was previously used as a breath sound, but with Dex, Daina, and Ruby, they have on-pitch, TUNED [h] which can be used in the place of a regular [h] if for whatever reason it is causing a harsh sound).

At the moment, there’s no plan for a dictionary to be part of the software. Kenji-B does plan to make his own dictionary for those who need it and EmpathP stated that she wants to do tutorials to teach people how to tune English VOCALOIDs.

Though this topic isn’t just for Dex and Daina, it’s just as important as the information on them. EmpathP has stressed that supporting English VOCALOIDs is very important. Here is the quote from EmpathP’s post:

I talked about why it is paramount that we show support to each company who produces English VOCALOIDs.

I realize there are still a lot of sore and betrayed feelings with recent releases. I especially realize that not everyone is happy with the companies and how they choose to promote (or not promote) their software. But I encourage each and every one of you to please try to be kind and supportive of the software releases for what they are.

The fact of the matter is English VOCALOIDs do NOT sell like the Japanese ones. It’s a gamble every single time these companies invest in this software. I don’t expect everyone to go out and buy the VOCALOIDs, some people simply don’t have the money, and other are more interested in listening to what other people make with these voices (and there’s no fault in that).

But there are other ways you can support these companies. Simply being kind, sharing the software with friends or others who might be interested, supporting producers who choose to primarily use English VOCALOIDs, those are some excellent ways to help out these companies.

I also thanked everyone who continues to be so generous and so wonderful in regards to their feedback on their releases, as that’s half the battle right there. English VOCALOID as a medium cannot continue to exist without you wonderful people.

No matter what happens, the VOCALOID is never at fault and should not be punished for any anger held towards a company. Despite the drama in the past few months, EmpathP asks that everyone remembers we’re hurting English VOCALOIDs as a whole. Not supporting an English VOCALOID makes it less likely that more will be released in the future.

Though there are no plans for official Dex and Daina products, there will be albums and other small items featuring the two.

At the moment, EmpathP has used the “Flufferpuffer” art (the art of Dex and Daina as full animals) for small coin purses.

The album “A Wicked Girl and a Tin Boy” will also feature the two.

Though these items aren’t official, they still show support and can bring more attention to English VOCALOIDs.

“Daina” is pronounced as a Latvian name. In that language, her name means “song”. This was completely unintentional!

The name “Dex” is less fancy. EmpathP and Kenji-B just liked the name.

She's a huge VOCALOID fan, a figure collector, and an all around nerd. Hoshi's been in the VOCALOID fandom since 2008 and has been a hardcore VOCALOID fan since 2013.
@VocaHoshi
Previous Sing in VOCALOID: VOCALOIDs Singing Outside the Box
Next A Review of the First ALYS Album: Éveil