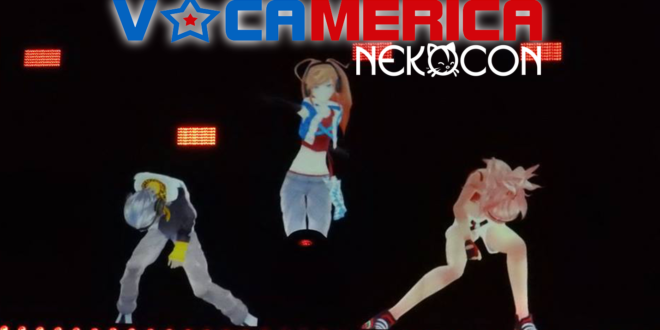 While the first showing of VOCAMERICA was definitely the highlight of NekoCon, Agetechlo provided quite a bit of coverage of the whole convention as well. From the VOCALOID cosplay meetup to the VOCAMERICA merch booth and, of course, the concert itself, there’s quite a bit to talk about.

VOCAMERICA was on Saturday, but the VOCALOID cosplay meetup was in full force on Friday. Agatechlo was able to not only photograph amazing cosplayers of Japanese VOCALOIDs, but also of several western VOCALOIDs as well! The VOCAMERICA spirit started strong and carried on throughout the weekend!

According to both EmpathP and Agetechlo, the concert was a huge success!

VOCAMERICA write up, as partially taken from my kickstarter update:My darlings,I come to you today with the happiest…

Everyone had so much fun and people were very interested in English VOCALOIDs! Below is a video highlight of VOCAMERICA featured on Kickstarter.

Cosplay at the Concert

Many western VOCALOID cosplayers came out to represent on Saturday! Even a VOCALOID 1 LEON cosplayer made an appearance!

As promised, the merchandise table was filled with VOCAMERICA and western VOCALOID goodies. You can find a list of most of the goods sold here. The photographs, however, give you an idea of some of the prints and CDs that were sold. In addition to the ones mentioned previously by EmpathP, you can see her “Sad Machine,” “Happy Birthday to Engloids!,” and what appears to be “Immortal Kiss,” as well as a few others.

Albums sold included the VOCAMERICA Official Soundtrack which was previously mentioned, as well as Persephone, A Wicked Girl and a Tin Boy, A Certain Path, and Fairytale Blue.

Overall, there was a little bit of merch to satisfy everyone and people were definitely interested!

The Next Few Weeks

Due to a few issues with the post office, EmpathP wasn’t able to ship out all of the Kickstarter backer rewards. Those are setting sail within the next few weeks for both United States and international packages. Expect a review of the physical version of the album as well as of all the other VOCAMERICA merchandise in the Diamond Package to come once Hoshi receives her package!

Once again, we’d like to specially thank Agatechlo for providing coverage of NekoCon and VOCAMERICA! He was a huge help and this article couldn’t have been done so well without him. All photographs were directly uploaded to VNN, and we’re so grateful for his help!

She's a huge VOCALOID fan, a figure collector, and an all around nerd. Hoshi's been in the VOCALOID fandom since 2008 and has been a hardcore VOCALOID fan since 2013.
@VocaHoshi
Previous Hatsune Miku: VR Future Live 2nd Stage Now Out For PlayStation VR
Next New Quadimension Album “南北极星 EP Vol.1” Crossfade Released!