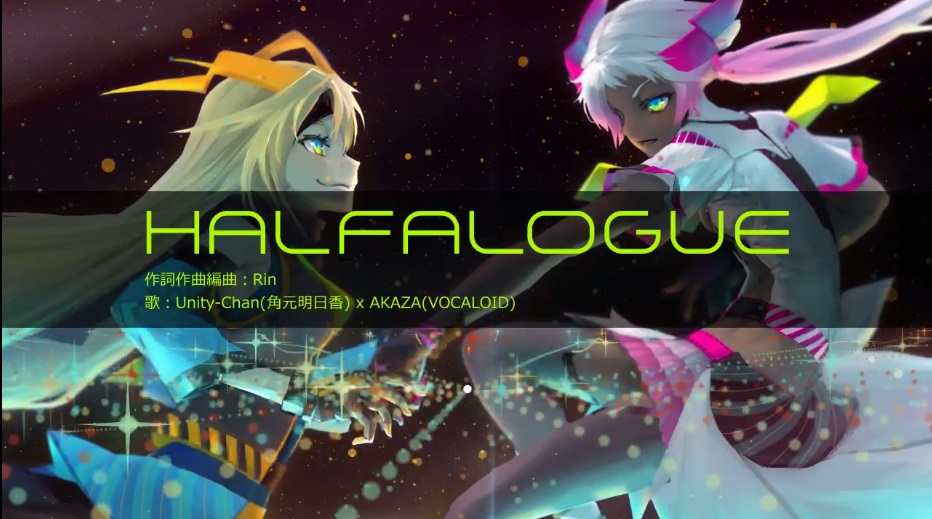 Lots of information about Unity-chan and PROJECT AKAZA has been revealed since the Comiket announcement. It seems AKAZA will be a VOCALOID while Unity-chan’s VOCALOID title is questionable. There are also several demos available for Unity-chan and VOCALOID SDK for Unity.

On the official VOCALOID website, one can download three different items. We are unsure of what the third item is but we do know what the first two are.

This first link is for the VOCALOID SDK for Unity software, which enables you to use Unity-chan’s voice bank in the Unity software. You will need the Unity Program version 5.2.2 or higher to extract the data on the downloaded file and to use the Unity Editor software to actually use the library to produce songs.

The Unity Program and the Unity Editor can be downloaded for free here.

We can also import this data and use it in the VOCALOID Editor.
However, if we use VOCALOID V4 Editor, the Growl feature cannot be used on Unity-chan’s voice. According to several producers, this is because her voice bank is equal to one made for the VOCALOID 2 engine. This means she can likely be opened in the V2 Editor as well.

This second link seems to give you access to a Candy Rock Star MV, in which you can modify and tweak around with her voice just like in the demo.

This tutorial video shows people how to use the “UNITY WITH VOCALOID REALTIME SAMPLE” software, a demo program released by K-shi Studio.

It is meant to test Unity-chan’s voice library with rather simple commands. You simply input the text in the box and play it using the virtual keyboard. This program was mainly created for people with slower computers that can’t run the Unity Program and Unity Editor. It lets them play around with her voice without putting too much stress on their computer.

Interestingly enough, new information has appeared that suggests an interesting relationship between the mysterious character AKAZA and Unity-chan. We can’t be certain of this yet but according to the Comiket demo uploaded to YouTube, AKAZA’s voice provider is Unity-chan’s voice actress, Kakumoto Asuka.

The demo also states that AKAZA is a VOCALOID while Unity-chan is voiced by Asuka without the VOCALOID software.

Despite this, the downloads on the VOCALOID website do say that the voice bank is Unity-chan.

At this time we don’t have much information but we will be sure to keep you up to date as new information surfaces!

She's a huge VOCALOID fan, a figure collector, and an all around nerd. Hoshi's been in the VOCALOID fandom since 2008 and has been a hardcore VOCALOID fan since 2013.
@VocaHoshi
Previous GSR Reveals Racing Miku 2016 Details, Team Drivers, and Mercedes AMG GT3 Continuation
Next Goodsmile Racing Announces 2016 Racing Miku Nendoroid Sponsorship Courses Early