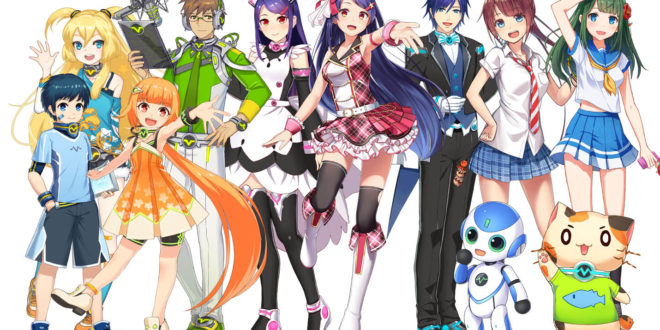 While Onseogosei no Seiyujimusha, translated as “Voice Synth Voice Actors’ Office” is far from new, they have a rather new addition that’s bringing the series of voice banks to new levels! In addition to their many talking voice banks, they now have a singing voice bank unlike any other.

As mentioned, Onseogosei no Seiyujimusha translates to “Voice Synth Voice Actors’ Office.” It’s a series of voice banks with a little bit of plot surrounding them. These banks are all members of an office and work to serve those who hire them.

Their introduction even sounds like an office secretary wrote it!

“‘Onseogosei no Seiyujimusha’ is a voice synth project that started in 2017 and is celebrating its first anniversary come this spring. Our voice synth software, which is capable of expressing emotions, will work hard to fit your needs!”

Onseogosei no Seiyujimusha utilizes the VoiceText engine by HOYA CORPORATION. Unfortunately, at this time, it’s only available commercially. However, there’s always a chance that this will change in the future!

The software’s official page advertises four special features of voice text: Emotion, Making Original Voices, Changing How the Voices Talk, and the Singing Synthesizer. The following points are translated from the website. Please note that the translations have been changed slightly to make more sense in English.

With VoiceText, happy, sad, and angry emotions are available. Through expression settings, you can control the strength and weakness of the voice. Through the emotions settings, you can control the strength of emotions. This allows you to have the phrase sound however you’d like it to. This makes for fun conversations featuring voices that don’t sound like robots but like humans.

You can create your own original voice synth by recording your own voice or the voice of a voice actor. You can even revive the voice of people who have passed away. In addition to creating the voice itself and giving it emotions, you can attach special sentence-enders to all the sentences (like a cat ending every sentence with “Nyan!”). You can find an in-depth tutorial (in Japanese) here.

Point 3: Changing How They Talk

You input the melody and lyrics, and create a song. Unlike other vocal synths, it doesn’t go by one sound at a time but instead uses a statistical model to create smooth and clear singing. It has the warmth of a human being singing.

At the moment, there are 11 characters capable of speaking — one of whom is debuting as an idol. Unless otherwise stated, the voice is capable of happy, sad, and angry emotions.

Maid: “Wake up, it’s morning♪”
Idol: “I finally get to make my stage debut!”

The clear voice of a female maid that’s good for news reports. The first voice made to express emotions.

The voice of a male butler who exists to work alongside Hikari. He has a very kind personality, and a calm and eloquent voice that’s good for news reports.

“I want to liven up your boring everyday life with my voice.”

The voice of a passionate and hard working DJ. Suitable for entertainment purposes.

The voice of an innocent 8-year-old girl. She has a clear distinction between on-the-job and off-the-job, and is a very calculating person who works hard and doesn’t mix business with pleasure.

Her voice is best suited for usage in conversation apps and robots.

“I’m almost done with my homework, can you wait a moment?”

The voice of a really energetic 8-year-old boy. He’s very serious about greeting people properly. His best usage is for conversation apps and robots.

“How do you say ‘Come pick me up’ in Japanese?”

Capable of Japanese and American English.

A female voice who can speak English. She’s bright and cheery, but also saucy and cheeky. However, she can’t read situations at all. She currently lives in America and she’s half Japanese and half British. Her voice is good for bilingual purposes.

“There’s no such word as ‘impossible’ in MY dictionary, nyan!”

A cat-like voice that always go “Nyan” at the end of his sentences. He’s very bright and easily elated. However, despite looking really cute, he’s actually a very smart cat. His voice is suitable for knowledge apps.

The Star of Our Office

“Did you all watch my show last week?”

A male voice bank with a very unique and light way of speaking. He appears to be a hard-working kind of guy but, in reality, he’s really good at poking fun at people and making retorts. Everyone’s senpai. He’s been working in the office longer than everyone else. His voice bank is aimed at entertainment like being a TV show announcement host.

The High School Girl from Hakata

“When I’m with you, anything and everything is fun!”

A very calm and serene voice. Kanna is a very serious and hard-working person. She’s very bright and friendly, but has a stubborn and pig-headed side as well. The character on her phone charm is called “Ikementai-kun.” Its name is a combination of “ikemen” (hunk) and “mentaiko” (pollock roe). Her voice is suited for any kind of voice guidance and Hakata-accented voice usage.

The High School Girl from Osaka

A voice bank with a brisk and energetic Osaka accent. Nao is a fun loving personality with a lot of male and female friends alike. But she’s also scatterbrained at times. She likes to root for her favorite baseball team with a megaphone that has the character “Takoyan” on it. Her voice is suited for any kind of voice guidance and Osaka-accented voice usage.

“I come programmed with state-of-the-art AI!”

A very clever, cute, and calming voice that’s good for calming people down. He’s equipped with artificial intelligence but, as one would expect, his true ability is…? His voice is appropriate for any kind of robot’s voice.

For more information, be sure to stay tuned to VNN! However, you can also check out these websites. The Onseogosei no Seiyujimusha website has voice samples of all character emotions, so be sure to have a listen!

She's a huge VOCALOID fan, a figure collector, and an all around nerd. Hoshi's been in the VOCALOID fandom since 2008 and has been a hardcore VOCALOID fan since 2013.
@VocaHoshi
Previous Goodsmile Racing Re-opens Figma Racing Miku 2017 Sponsorship Courses Until June 7th JST
Next Racing Miku RSK Version MikuMikuDance Model Released By DigitrevX