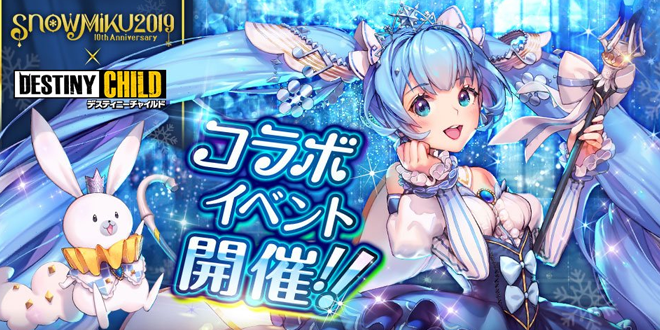 Snow Miku 2019 is surely gathering a lot of attention and collaborations lately! The latest one to be announced is a whole new collaboration with the mobile game Destiny Child and will begin on January 31st!

It’s totally not the first time we see Hatsune Miku collaborating with this game! We previously had her joining in her standard outfit and after that as Snow Miku 2018 as well! It shouldn’t really be a surprise for us to see her once more, this time dressed as our favorite snow princess, ready to bring her winter magic worldwide!

Our beloved snow princess will be join Destiny Child’s unit cast on January 31st after their game maintenance and there are various way of getting her in-game!

Let This Snow Princess Support You!

This 5★ “Snow Princess Miku” unit is a water-type support, and seems to be powerful too when used in this same type of teams!

“A princess alighted upon the earth along with the pure falling snow.”

Stats (in her base form):

Will you be getting her? The collaboration ends on February 21st so you may have to hurry to grab yours! Let us know what you think about her!

Stay tuned with us on VNN for more exciting news about your favorite Virtual Singers!