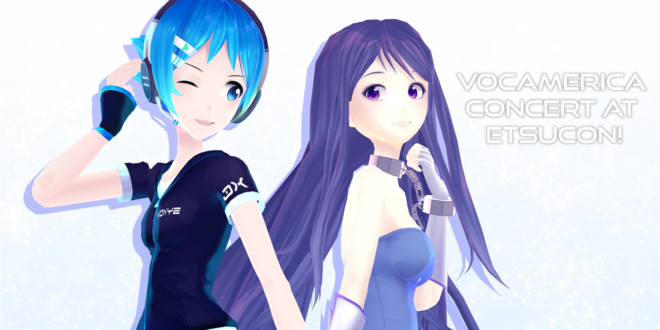 Ladies and gentlemen there's been a slight change of plans. This coming weekend #VOCAMERICA will give an encore concert at Etsucon

About the VOCAMERICA Concert at ETSU-Con

Fans do need to note that this is a last-minute concert request from ETSU-Con, so EmpathP doesn’t have much time to prepare. It will be an encore performance of the NekoCon concert and will give fans a chance to see the original performance before its Tora-Con upgrade.

This #VOCAMERICA etsucon concert will be rather last minute and a little low tech due to the short time we have, but still fun nonetheless!

EmpathP has warned fans that the concert will be low tech. Due to the short notice, she has little time to prepare. This means that she’ll be working with what she can. However, she and Mystsaphyr will be working hard to make the concert a great one!

She's a huge VOCALOID fan, a figure collector, and an all around nerd. Hoshi's been in the VOCALOID fandom since 2008 and has been a hardcore VOCALOID fan since 2013.
@VocaHoshi
Previous Winter Wonder Festival 2017 Figure Roundup!
Next Snow Miku 2017: Twinkle Snow ver. Nendoroid, Figma and Dollfie Dream Outfit Preorders Open!