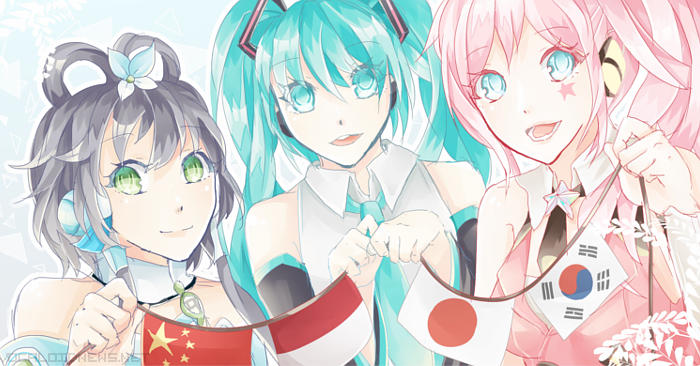 On July 14th, 2015, VOCALOID News Network launched with the anticipation of being an English-only site. Originally, we planned to partner with sites that would translate our articles into other languages if they had the time. Now, a little less than three months later, our plans have drastically changed. We will be providing our news in English, Spanish, Chinese, Indonesian, and Korean with room to add more languages should our team grow.

While all articles are not currently translated into each language, our admins will be hard at work in the coming days translating older articles while keeping up with the new ones. The team will mainly focus on translating news but other articles are open for translation as well should time permit. We already have an interview translated in Chinese with plans for the others to eventually be translated as well.

Below, you can find information on each section of our current translating team.

From the beginning, we’ve been working closely with Vocaloid Chile. Without them, VNN wouldn’t exist right now. While they’ve translated their interview with Naoto Fuuga from Spanish to English, they’ve also translated our information on IA/VT Colorful into Spanish. Now a member of their team is coming to the front lines and translating articles for a Spanish version of VNN. We’re eternally grateful to them and are happy to have them on our team translating articles into Spanish!

Our Chinese team has actually been working behind the scenes for quite some time as translators of Vsinger news. Without them, it would have been impossible for us to reveal information on Longya and Stardust as quickly as we have. Thanks to them, we’re one of the prime sources for Chinese VOCALOID news in English. And now, with their help, we’ll be a source for Chinese VOCALOID news in their own language as well!

These members of our team come from the Chinese VOCALOID fan page on Facebook. Be sure to give them a “Like” if you speak Chinese or even if you just want to support them.

In addition, we have a secret anonymous member helping out as well. They prefer not to be mentioned by name but they’ll be helping us hold down the fort for the Chinese version of VOCALOID News Network.

Our Indonesian translators are also from a VOCALOID Facebook page: VOCALOID Lovers Indonesia. Though our partnership with them is slightly newer, we’re just as happy to welcome them to the team. Indonesia is filled with huge supporters of VOCALOID, as proven by the Miku Expo concert in Jarkata. With our Indonesian translators, we can now reach out to this audience as well.

Be sure to support them by “Liking” their page!

As many may have noticed, our news on the Korean VOCALOID UNI gained quite a bit of attention from fans and helped create quite the following for the newest Korean singer. This gained a bit of attention from the Korean fandom and thanks to an anonymous translator, we’ll be supporting Korean as well! The Korean website has yet to launch but rest assured we’ll let you know when it’s live.

She's a huge VOCALOID fan, a figure collector, and an all around nerd. Hoshi's been in the VOCALOID fandom since 2008 and has been a hardcore VOCALOID fan since 2013.
@VocaHoshi
Previous Official “B Who I Want 2 B feat. Hatsune Miku & Amuro Namie” Music Video Released
Next Hatsune Miku Calendars for 2016 Are (Almost) Here!