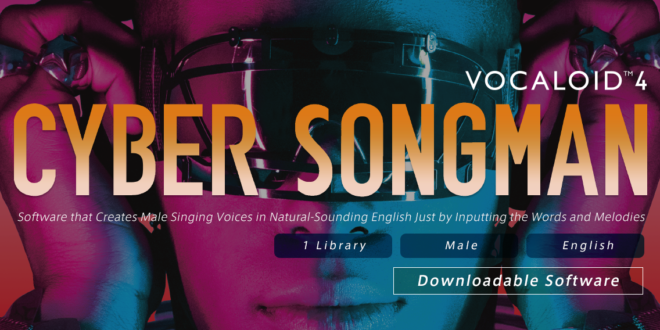 The official VOCALOID Facebook page as well as Crusher-P have just announced a new V4 VOCALOID: “CYBER SONGMAN“. As one may be able to guess, he’s in the same series as the female V4 vocal, CYBER DIVA.

CYBER SONGMAN has a second User Dictionary. One can switch between the two in order to have a more British or American accent.

Below, you can listen to a comparison of CYBER SONGMAN with and without the extra phonemes.

He’s also capable of “gruff” and “harsh” voice expressions, which can be used for a wider range of sound effects or for particular music genres.

And, of course, he’s able to Growl as well.

At the moment, CYBER SONGMAN is only available as a digital download.

There are currently two demo songs available for CYBER SONGMAN.

The first song, “Rinse, Repeat” is a collaboration between CrusherP, The Living Tombstone, and Fruutella.

The second demo song, by YusukeKira and Cheesum, is titled “Fighter”.

In addition to the demos, YAMAHA also uploaded a video detailing the development of CYBER SONGMAN. You can also read a text version of the interview here.

The interview discusses the previously mentioned extra phonemes as well as a bit of information on how CYBER SONGMAN was developed.

For more information, check out the official VOCALOID English website’s article on CYBER SONGMAN as well as his official product page.

NOTE: We’ve updated this article to provide more information and make it more clear for readers.