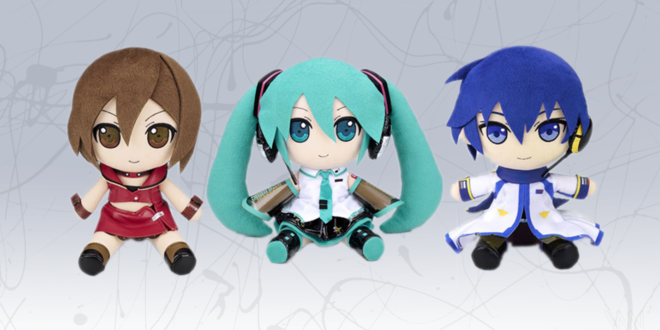 Fans of the GIFT plushies series are in for quite the treat, since several of the new Crypton VOCALOID plushies are now available for pre-order! The V3 version plushies of KAITO, MEIKO, and Miku are all currently out for pre-order on AmiAmi.

All three plushies are available for ¥3,580 JPY (about $31 USD) plus shipping, and are set to release in February 2017. You can follow the links below to get to each plush.

At the moment, it’s unknown if the Luka V4X plushie seen earlier this year will end up on AmiAmi. In addition, fans should also keep an eye out for the Kagamine Rin V4X and Kagamine Len V4X plushies set to release at Comiket 91 at the end of the year. These two also have no word on whether they’ll appear online for sale later.

Be sure to follow VNN as we’ll update you the moment these guys hit online stores!

Thanks to the Vocaloid Buy Blog for finding the three plushies on AmiAmi and spreading the word!

She's a huge VOCALOID fan, a figure collector, and an all around nerd. Hoshi's been in the VOCALOID fandom since 2008 and has been a hardcore VOCALOID fan since 2013.
@VocaHoshi
Previous Select Hatsune Miku: Project Diva Game Titles Discounted Up to 60% Off in US and EU, Limited Time
Next Tone Rion V4 & the New Yumemi Nemu VOCALOID!