YAMAHA has surprised the fandom with an announcement of yet another male VOCALOID. The new library will be VOCALOID Fukase and its voice provider is none other than Fukase from SEKAI NO OWARI. This marks the second high profile singer (the first being Sachiko Kobayashi voicing VOCALOID Sachiko) and the third high profile person (the first being Sachiko, the second Arsloid*) to have a voice bank announced in less than a month. Incredibly, this is also the second male voice bank to be announced in less than a month as well.

However, many details are still unknown about VOCALOID Fukase. For the moment, all we know is that a design contest is currently being hosted through pixiv and that VOCALOID Fukase will be a VOCALOID 4 product.

*Though Arsloid was officially announced back in June, no significant details (besides his voice provider’s identity) about him surfaced until recently. 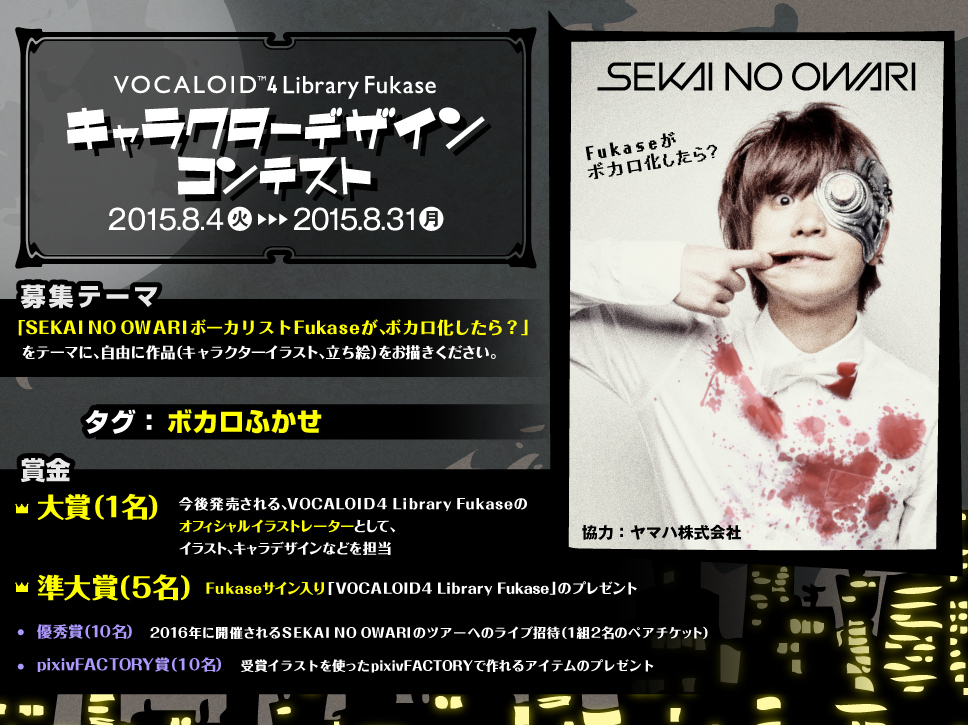 How to View the Entries

If you’re interested in keeping track of the contest entries, you can follow this link or the “ボカロふかせ” tag. As of the time this article was published, there were already three pages of entries.

Fukase is the main singer in SEKAI NO OWARI. He’s also collaborated with livetune, singing the vocals for the “Devil Survivor 2” anime. In addition, SEKAI NO OWARI also sung the theme song for the first “Attack on Titan” movie.

“ANTI-HERO“, the theme song of the “Attack on Titan” movie.

Fukase’s voice works both when being used powerfully as well as when being softer. Though there is no official word on if VOCALOID Fukase will have more than one voice bank, many fans hope so due to the versatility of Fukase’s voice.

She's a huge VOCALOID fan, a figure collector, and an all around nerd. Hoshi's been in the VOCALOID fandom since 2008 and has been a hardcore VOCALOID fan since 2013.
@VocaHoshi
Previous VOCALOID UNI Illustration Revealed!
Next The Road to Producers: An Interview with EmpathP