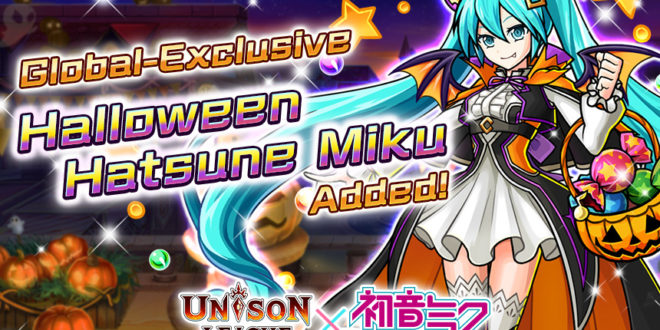 She’ll be available from special Spawns called “Divine Grace Spawns”, which offer increased appearance rates for SSR items. These Spawns will be available from the time the update hits until the collab ends on 10/19 at around 2:00 a.m. Unison Time/Eastern Time.

The x10 Divine Grace Spawns that offer a chance to receive her, guarantee that all the Gear that appears is of SR Rarity or higher.

Skill name:
I Will Prank You!

– Ability Power 260. Damages all enemies 2 times with magic light damage at a success of 100 points.
– Ability Power boosted by 10 for each increase in Skill level.
– Reduces physical/magic damage taken by all allies to 0 for 2 times.
– Recovers 20 Cost for all allies.
– Reduces the stats of all enemies by 40% for 60 seconds.
– Casts frenzy on your character for 60 seconds.

This skill above is for her UR form, which is the strongest and recommended one to use.

A virtual singer lover with a dream of connecting the world of virtual singers together through VNN. Monds is also a huge rhythm game fan/player on his spare time.
@monds1234
Previous Overseas Hatsune Miku Fans Appear On “Why Did You Come To Japan?” TV Show
Next 23-Meter Long Art Exhibition Displayed For Hatsune Miku’s 10th Anniversary in Otemachi, Tokyo