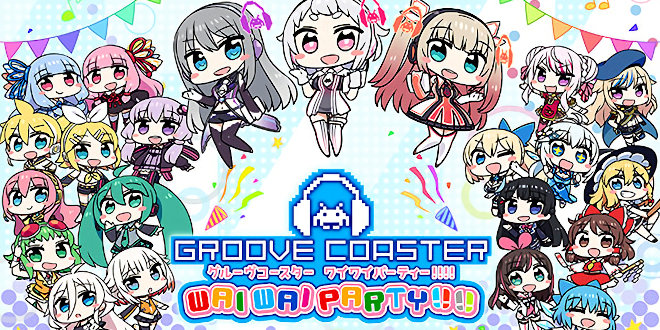 In these days full of news, even TAITO gives us something to look forward to! The famous video game and arcade systems company just announced a new version of one of its most successful hits, GROOVE COASTER WAIWAI PARTY!!!!. This time, the game features VOCALOIDs and even Virtual YouTubers! Let’s check it out!

A new Rhythm Game with Your Favourite Vocalists!

The newest installment in the GROOVE COASTER series, which is also available on Android, iOS and Windows devices, this time lands on Nintendo Switch. GROOVE COASTER WAIWAI PARTY!!!! features not only J-Pop music like Lemon by Kenshi Yonezu, but also lots of VOCALOID music and even some Vtubers’ most famous songs.

The game is set to be released in November 2019 as a digital only title costing 6,500 JPY before tax. GROOVE COASTER WAIWAI PARTY!!! will come with a vast library of tracks to play, ranging from not only the above mentioned music, but also anime songs and even Touhou music soundtracks, reaching a track list with more than 100 songs to choose from. Having so much choice will surely give you a hard time picking a song!

GROOVE COASTER WAIWAI PARTY!!!! will be playable both with touch screen controls and buttons, or even while holding your Joycons in a more “Active” mode, as suggested in the trailer of the game. Up to four people will be able to play in local mode.

The theme song for this new game is by the amazing DECO*27 and is called GROOVE LOOP, with vocals by the Vtubers Mirai Akari, Dennou Shoujo Shiro and Tsukino Mito.

The featured VOCALOIDs in the game are Hatsune Miku, Kagamine Rin & Len, Megurine Luka, Yuzuki Yukari, GUMI, IA and ONE. The Kotonoha VOICEROID twins, Akane and Aoi, are featured as well!

As for the VTubers, there are not only the three aforementioned, but also HIMEHINA and Kizuna AI! Some songs will have a “Vocal Change” feature which will let you change them from the original version to a cover by one of the game’s featured Vtubers!

We’re eagerly waiting for this new game, and you? A tracklist so huge is definitely a challenge we’d love to accept!
Don’t forget to follow us on VNN for more exciting game-related news!