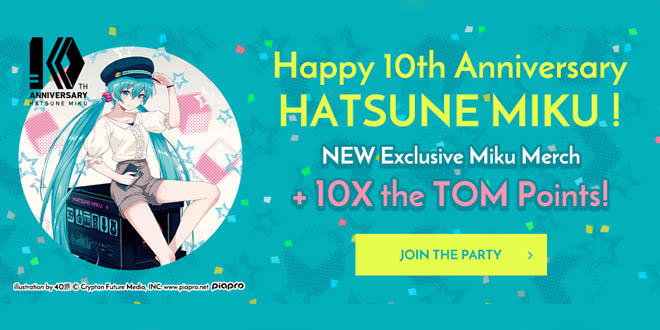 August 31st marks Miku’s 10th Anniversary and there are tons of goodies to grab. Tokyo Otaku Mode has a unique selection of items for fans to grab if they feel like celebrating!

While we’ve previously mentioned these glasses, they’re still in stock and available for purchase!

From a collaboration with CoCocoLlabo comes this Hatsune Miku inspired leather wallet! The outside has a keyboard embossed design and a metal ornament of the 10th Anniversary Hatsune Miku logo. Flip it open and you’ll be greeted by Miku’s official blue, green and magenta colors, plenty of pockets, and a zippered compartment with a metal and enamel charm designed after her headphones. Also inside, is the Hatsune Miku logo, the triangle pattern of her belt, and the outline of her tie complete with its two stripes.

As if that wasn’t enough, it comes with a bonus illustration card as well to keep inside! The card has an illustration of Miku specially drawn for this anniversary and is serial numbered. If you always spend all your money on Miku merch, might as well have a Miku wallet!

Comes with a bonus postcard.

From a CoCocoLlabo collaboration comes this Hatsune Miku inspired, durable container made in Japan. The graphics printed on the outside, in Miku’s official blue, green and magenta colors, represent the controls for adjusting the vocals of Vocaloid software such as velocity and dynamic controls and on the top are graphics of the common knobs and switches included on amps. Fifteen 2 liter plastic bottles can fit inside, and it features convenient Insulok cable ties to tightly secure the lid on. Also comes with a bonus A4 clear file with an illustration specially drawn for her 10th Anniversary of Miku sitting atop a couple of these containers! Why not use it to store collectibles and clothes?

While there’s a plethora of places with this Nendo up for pre-order, you can’t do a 10th Anniversary Merch article without including her!

If you’re just looking to buy some Miku merch for Miku’s birthday (you may as well celebrate her birthday by buying more of her!), there’s a lot more merchandise available on TOM.

You can find all of the Miku merch on TOM here.

And if you’re hunting for VOCALOID goods in general, you can click here.

She's a huge VOCALOID fan, a figure collector, and an all around nerd. Hoshi's been in the VOCALOID fandom since 2008 and has been a hardcore VOCALOID fan since 2013.
@VocaHoshi
Previous Hatsune Miku 10th Anniversary Collection Launches on WeLoveFine!
Next VOCALOID Themed Jewelry Now at Tokyo Otaku Mode!