Unfortunately, OMAKASE is no more after this final box. However, they ended with something all VOCALOID fans can appreciate: a Hatsune Miku OMAKASE box featuring Hatsune Miku, Kagamine Rin and Len, Megurine Luka, KAITO, and MEIKO. Of course when they promised more than just Miku merchandise, I hopped on it. It’s not often that you get merchandise featuring more than just Miku!

However, things were slightly disappointing. It was still a good box but the lesser characters didn’t receive much love. They were there, though, which is quite a plus.

The box features vectors of all six character heads as well as a leek/spring onion (Miku’s character item is constantly being argued about), the OMAKASE logo, and a music note. The small things like this really make the box incredibly nice, and the decorations continue inside.

The top part of the box is decorated with the names of the VOCALOIDs as well as the vector heads and is incredibly colorful. The tissue paper follows the same design also, which is super cute. I’m definitely saving it for a gift to a VOCALOID fan.

Please note that I did have to take everything out of the box before I was able to take pictures. When I got it, everyone was very interested in seeing what was inside. So it’s a bit messier than it was originally packed.

Every subscription box comes with some form of a “table of contents” so to speak. It’s either a card or a booklet that shows you what you will find in the box and gives you information on each item. Usually they’re kind of just there and get thrown off to the side, but this one kind of needs to be framed. It’s a work of art.

The front of the card is done by the artist Rakchi and is actually available as a play mat. However, the artist isn’t on Piapro and we were unable to track down any information on them. Nonetheless, it’s an awesome image! 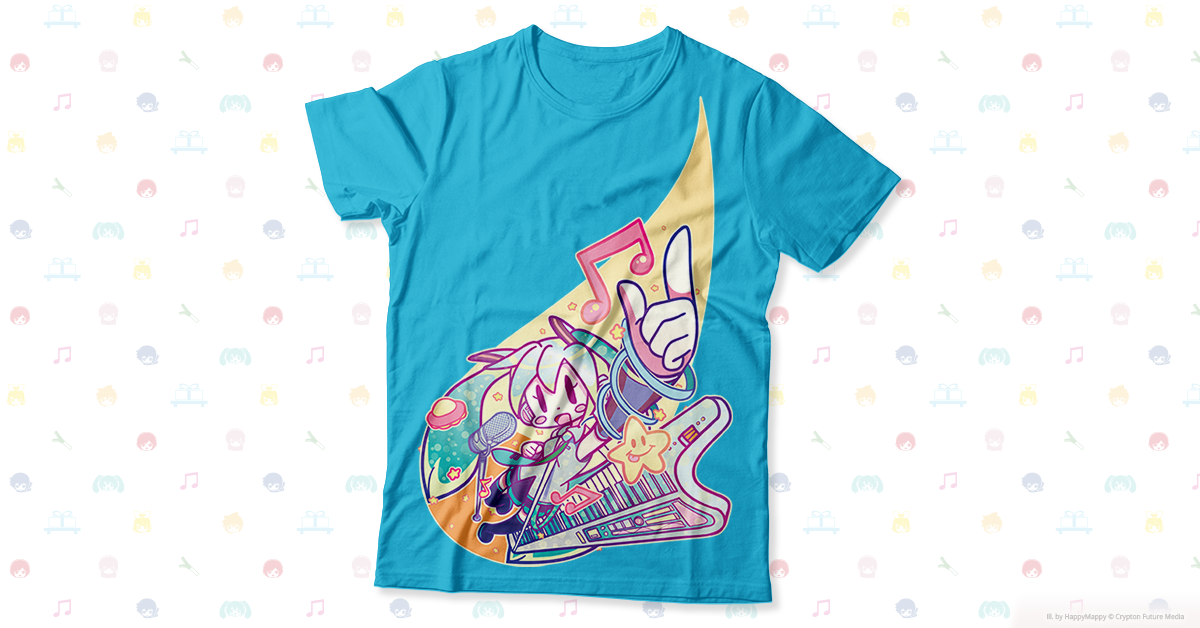 “When we first began work on OMAKASE, we created a prototype tee that only 100 people ever received of our favorite songstress bursting with color and motion. This exclusive blue edition of that fabled shirt is one of the prettiest designs we’ve produced. Rock it while you rock out!” – OMAKASE

Everyone following the news on this box knew that its a very nice shirt by HappyMappy, it was the main attraction with a cosplay belt and loop being the second item. You can find information on the t-shirt here and pictures of a model wearing it here. No way you’re getting a picture of me.

My only suggestion is that you wash this shirt (preferably separate from all your other clothes) before wearing it. Mine came with a rather “new” smell and not a good one. It was more like an off smell that made me want to wash it. A good wash should clean off any excess stuff though, and remove the odor.

I doubt it’s the quality of the materials so much as the shirt seemed to be fresh off the press when it was put in the protective plastic bag (which is an A+ move. There are some services where people have received “pre-stained” t-shirts because things can happen between the box getting shipped out and it landing at your door).

While we’ve seen the belt modeled before over on Viewster’s blog, a lot of fans had questions about what the belt would be like, since belts are a bit harder to size than t-shirts. Good news is this belt IS adjustable and can fit approximately two Hoshi’s in it. If you’re on the smaller side, it’s a bit of a pain to use because it is a very large belt.

Protip from the OMAKASE item description: “Wear your belt right-side-up to sport Rin’s style or upside-down for Len!”

“This exclusive comic collection features a dozen of our favorite artists from around the world, exploring Piapro characters in a way never seen before. We’re beyond proud to have collaborated with world-class talent to bring a collection of fun and compelling comics and illustrations to life!” – OMAKASE

The comic anthology features one comic for each Crypton VOCALOID and one full page illustration, starting with Miku, KAITO, the Kagamines, and finally MEIKO.

Overall, the comics aren’t that bad. They highlight the different art styles of many artists and also manage to tell stories without using words. However, there are a few panels here and there that are definitely a bit on the lower quality side. Luka’s derp face continues to stand out even now. The full page illustrations are rather good, though, with Evon’s and MIQ’s standing out quite a bit. Out of respect for the artists, we won’t be posting images from the comic that haven’t been shared by the artists. However, you can find teasers from Evonyo, linzb0t, and kaiami by clicking their names in this sentence. And while Heejin hasn’t uploaded their work for the comic, this isn’t the first time Miku fans will have seen a Miku masterpiece by them. Heejin drew art for the “Dreams of Electric Sheep” art exhibition.

Now fans may be wondering how this is exclusive when there’s one up for preorder right now. Well this one has a winky face! And it’s slightly too adorable. I don’t really want to use it because I’m scared of messing it up!

Fans not in the United States or Canada have it really good because the regular Miku Squishable has an international shipping cost of a whopping $45 USD. Fans who now want one of their own can get more information on how to order one (without a winky face, sorry) here.

As an added bonus, not only is this product exclusive but also anyone who got this box now has a Squishable Miku long before orders even close on the regular one. 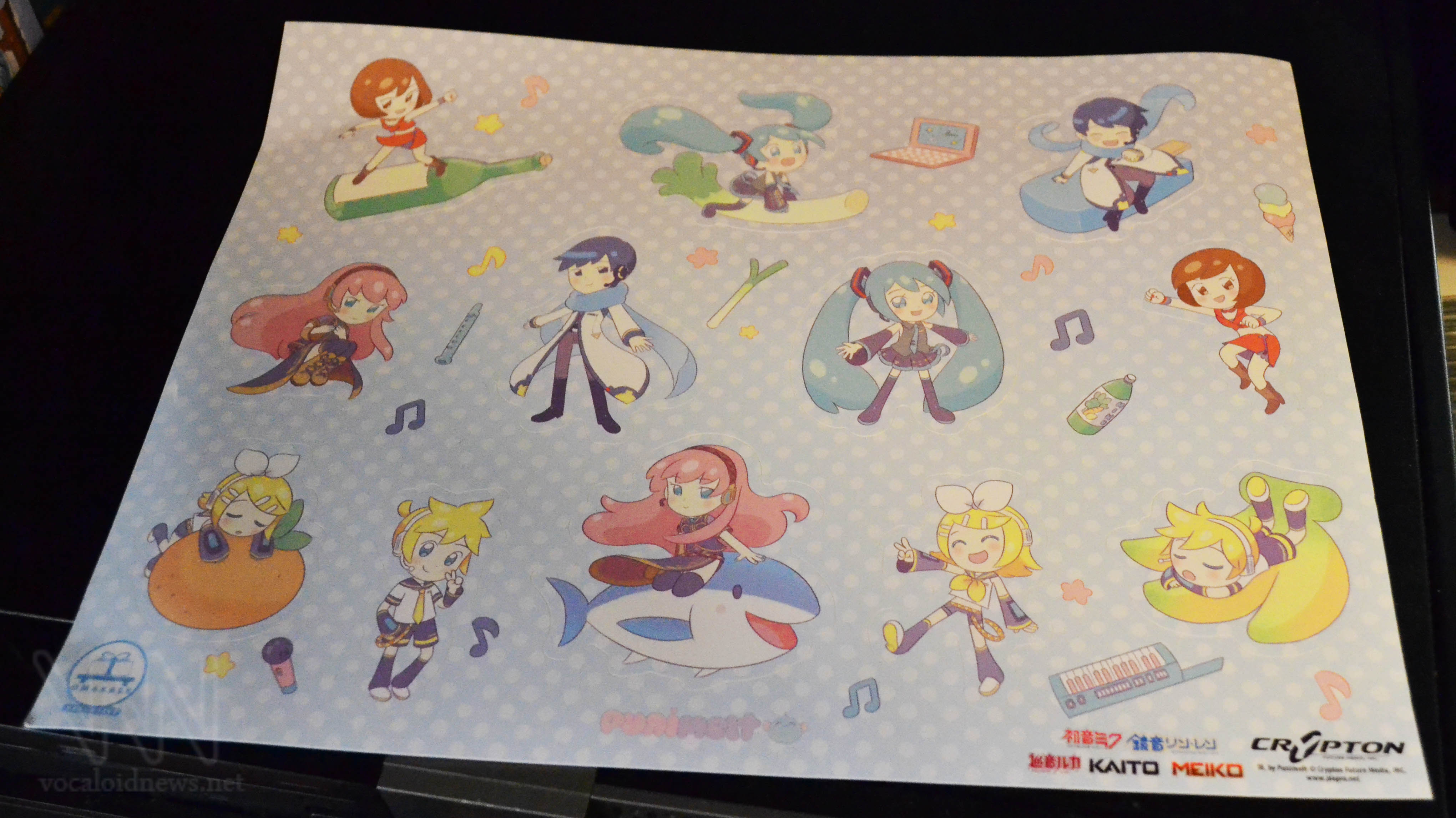 “Our original artist collaboration continues with a completely original sticker set from Punimelt! Enjoy two version of each Piapro character – one in a performance pose and one with each character’s special food item.” – OMAKASE

This sticker sheet is about the size of the box length and width-wise, and features all the Crypton VOCALOIDs drawn by Punimelt, who is a master of adorableness. The stickers are bright, colorful, and full of personality. I’d give it a 10/10, but the fact that these are stickers brings down the score. Only because I’m personally conflicted. Do I use them? Once I stick them to something, they’re stuck for good! And then what?! It’s not like I can buy another sheet! But man do I want to show them off!

Stickers are a serious commitment. In all seriousness, though, these are some awesome stickers and are absolutely adorable. I can see fans getting a lot of use out of them. Even if mine will sit forever unused because sticking them onto something is too much of a commitment. 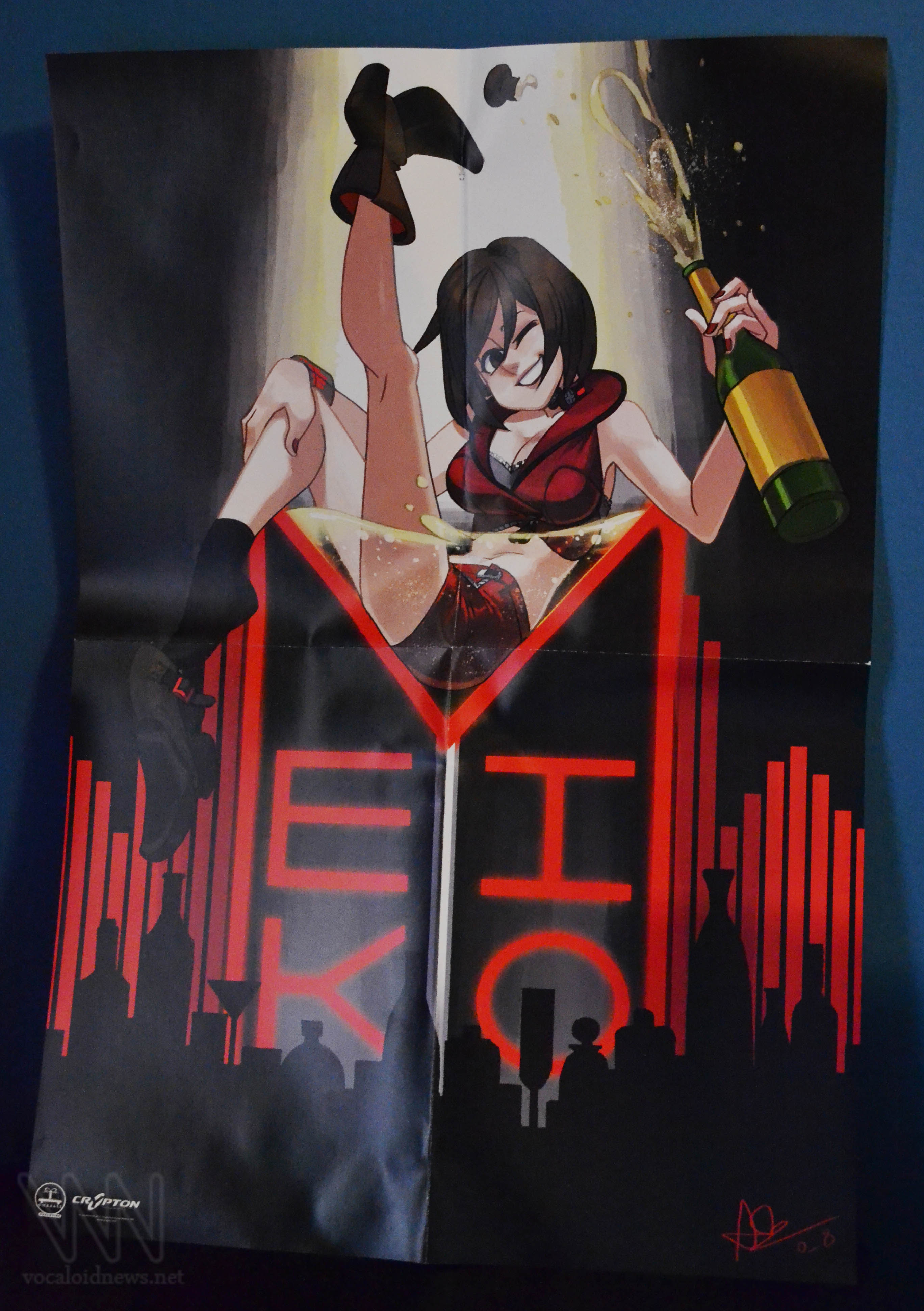 “This exclusive poster by Alex Ahad takes a playful, pinup-style champagne spin on the character who started it all! MEIKO’s unique legacy and world class status are on full display here in an exuberant part scene!” – OMAKASE

The OMAKASE staff not being up on VOCALOID history aside (I remember you, LEON and LOLA), the art is nice. Fans of “Skullgirls” may recognize Alex Ahad‘s name or at least his art style as he’s the main artist for the game.

While the art is pretty good, it was kind of ruined by the fold lines. While I know this is inevitable considering the size, I would have personally preferred a smaller poster that could be rolled up and put in the box instead of a larger one that got folded in half twice to fit.

Nothing ruins a perfectly good poster like fold lines. The fact that the poster is filled with dark colors makes the lines stand out even more, in my opinion.

Please, subscription companies. Make the posters smaller and roll them up. I don’t know many people who would complain unless they want to get it framed (as custom sized frames cost more money).

I have mixed feelings about this box. While it is great for any fan of Crypton characters, it kind of really leans towards certain ones. The Facebook page made it seem like the VOCALOIDs would all be treated equally, but there’s definitely the usual bias going on with a slight flip (usually KAITO gets more love than MEIKO and Luka more than both of them, but this box actually seems to like MEIKO more than KAITO and Luka).

There are quite a few Miku items to be had (which are of awesome quality) and she’s featured throughout the box, which is to be expected as she is Crypton’s biggest success and by far one of the most successful VOCALOIDs out there. That I don’t mind. (Not to mention the box kind of carries her name. Which is slightly confusing but definitely a good way to sell it.)

Then we have the Kagamine belt and belt loop and a MEIKO poster, which both focus on the respective characters solely. And then there’s KAITO and Luka who both kind of roll in as a must in the comic and stickers that feature all of Crypton’s VOCALOIDs.

Overall, though, I do have to give the OMAKASE creators props for trying to include each VOCALOID as much as possible. Obviously, a $35 USD box isn’t going to be as full of goodies as more expensive ones, and fans definitely got more than they paid for. It just may not be quite what they were expecting.

This was a learning experience, though, and any subscription services looking to feature the twin-tailed digital diva and her siblings/friends/whatever-you’d-like-to-call-the-rest-of-the-Crypton-crew can look at Omakase as the box to beat.

She's a huge VOCALOID fan, a figure collector, and an all around nerd. Hoshi's been in the VOCALOID fandom since 2008 and has been a hardcore VOCALOID fan since 2013.
@VocaHoshi
Previous Hatsune Miku’s Ievan Polkka Cover Song Featured in LG’s G5 Phone Commercial With Jason Statham
Next Figma Racing Miku 2016 Sponsorship 2nd Round Courses Now Open!