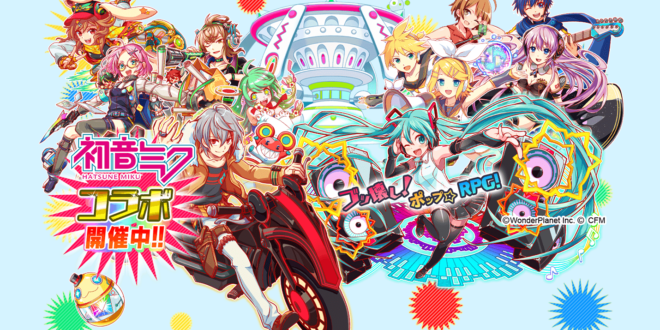 The popular puzzle game Crash Fever is collaborating with Hatsune Miku and the other Crypton VOCALOIDs to hold a giant event. This Hatsune Miku x Crash Fever collaboration features two Miku, Rin, Len, and Luka units (Original and V4X) as well as one KAITO and MEIKO unit. There’s even Snow Miku and Yukine units!

The event started on February 3rd and will last until the 17th.

Crash Fever is available on Android and iOS.

From February 3rd to the 10th game time on the Global Version of the game, fans can summon limited edition units via the “Hatcher.” The first x10 pull is 250 Polygons (in-game currency bought with real money) while the following x10 pulls are 500 Polygons. A single pull is 50 Polygons. However, doing five x10 pulls guarantees that you get to pull a special unit. During this time period, users can collect 30 Polygons each day for free.

UPDATE: The V4X Gacha is available until February 17th.

For the regular Cross Promotional Gacha, it’s a guaranteed Miku or Rin.

In addition, both Gachas also have the chance to drop MEIKO, KAITO, or Luka. Luka has two different units: one for the regular Gacha and another for the V4X.

In addition to the summoning events, there are a plethora of quests as well. These are all available for a bit longer. Logging in during this time period should net fans a free “Stardancer Rabbit Yukine” unit which will really help them out as they start the game. Some quests like “Frosty Diva” are available even for beginners and give you a chance to net a new unit. “Frosty Diva” lets you get Snow Miku 2016, called “Winter Spots Miku” (in her 4 star form) in game. “Starry Sky Diva” gives you a chance to get Snow Miku 2017. In the spirit of Miku events, the background music for these levels features themed music. Both Snow Miku themed levels have “Star Night Snow” as their boss battle music and even feature Miku’s voice during the Fever mode.

At the time of writing, Hoshi hasn’t been able to get the Snow Miku 2017 unit. However, we’ll update you when we have info on her. Other quests require 30+ energy to play, so they’re a bit out of the reach for brand-new players.

Fans can also get a higher level Snow Miku 2016 as well as a Snow Miku 2014 from completing certain quests on specific levels!

“Like” the game on Facebook for an extra 60 Polygons! (10 for liking and 50 for the 7 million downloads special.)

She's a huge VOCALOID fan, a figure collector, and an all around nerd. Hoshi's been in the VOCALOID fandom since 2008 and has been a hardcore VOCALOID fan since 2013.
@VocaHoshi
Previous Vsinger is Holding a Design and Song Contest!
Next VOCAMERICA Patreon Now Open