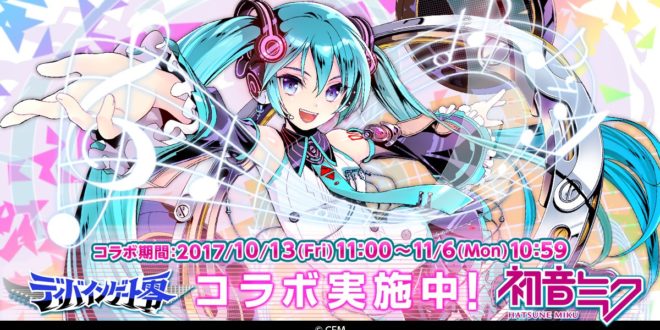 The new collab was first announced back on September 23rd through a special livestream announcement on Dengeki Online’s official YouTube channel, which can be watched below!

About one year has passed since Shibuya City by rocked by the Demonic Shadow Eclipse, which swallowed up everything in its path, including 30% of the population on Earth.

At what was the epicenter of the chaos, the site of the Shibuya Rock Festival, volunteers are now rebuilding and reconstructing. They are preparing to hold another festival with the theme “Breathing Life Back Into The World Through The Power of Music.”

Among the multitude of artists who will be attending the festival, there is one certain diva who has confirmed her participation.

“May my song reach everyone in the world, and may it serve as a symbol of courage and hope.”

The name of the participating diva who read these words is none other than Hatsune Miku.

The festival organization committee is incredibly enthusiastic about holding this festival around Miku’s appearance, intent on turning it into that “symbol of courage and hope.”

In the initial livestream announcement, illustrations for the new evolved forms of existing units, brand new units, a new quest boss, and mission reward that will all be part of the collab were all revealed (please note that the following Romanized or translated names, titles, profiles, and skills are not official). 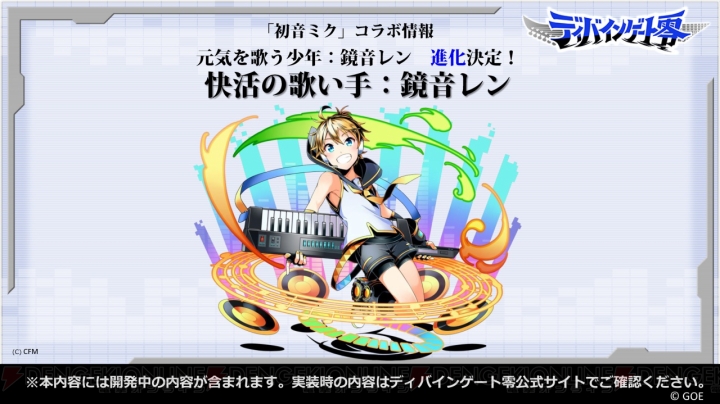 Profile: This blond lad understands full well that there is much unhappiness and absurdity in this world. But despite that, he always puts on a strong and forward-looking face, and sings with a smile so wide that his pearly whites are always visible, knowing that it helps brighten up the day for those around him.

“Whenever life gets you down, just listen to me sing! You’ll feel better right away and find yourself singing along!” 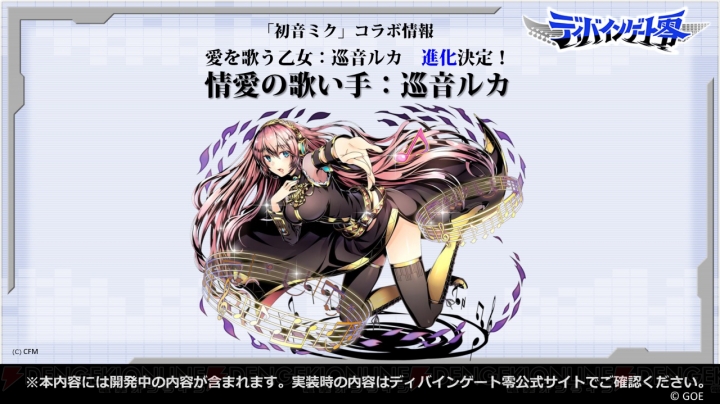 Profile: With a pained expression on her face, she sings her song up towards the sky, all in hopes that her voice will reach someone, even someone whose name she doesn’t know. To this day, carrying all the sentiments of her heart, her voice continues to bring love to somebody’s life.

“If it’s okay, would you like to listen to me sing? If my song can leave a lasting impression in your heart, then that would make me very happy.” 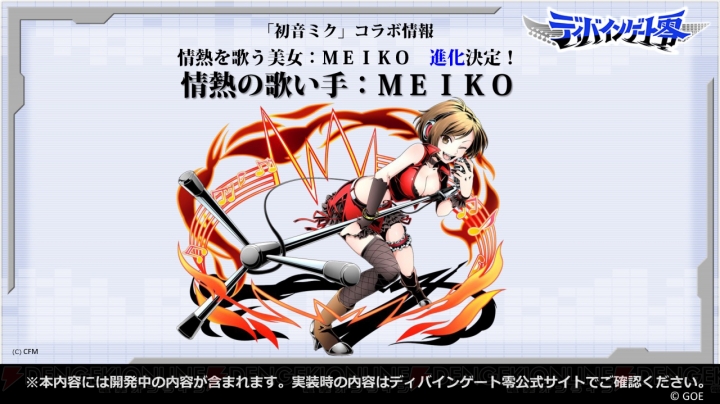 Profile: No matter what age we live in, those who forget their passion can never live full lives, and her voice has the power to pick up the fragments of a broken passion. Old or young, male or female, when you’re standing before her, she’ll make you sweat hard and pump your fist in the air.

“It’s no fun wearing a solemn face all the time, right? Then today’s the day to listen to me sing and forget all your troubles! Alright, let’s do this thing!” 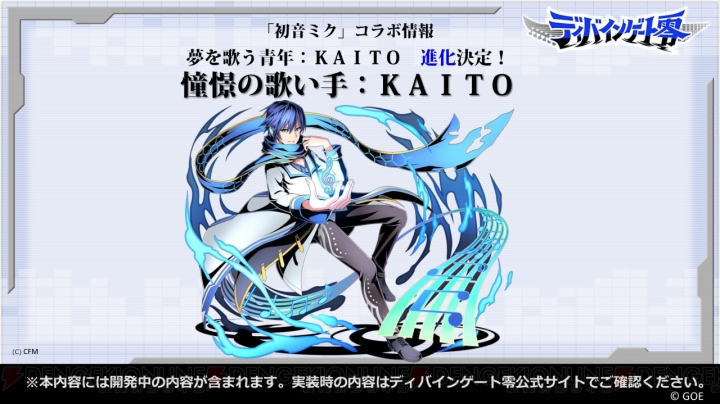 Profile: When this young man starts to sing softly, just close your eyes and  let your thoughts take form one by one, taking in each melody one note at a time. Whenever he finishes singing, he’s always met with a maelstrom of applause, to which he responds with a modest bow.

“Although I’m singing for all of you, I’m also singing for each and every one of you individually. It would bring me joy to leave a lasting impression in each of your hearts.” 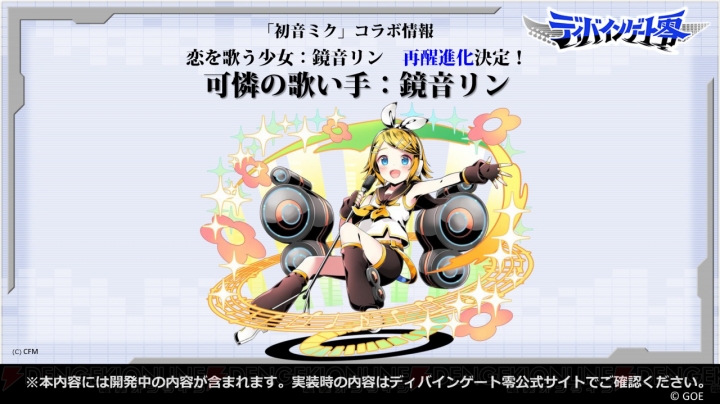 Profile: This blond lass always wears a cute smile upon her face. She sings while hopping up and down with her tiny frame, getting others to smile and cheer along, believing that you can make someone happy by cheering for them.

“Let’s all sing together in one big voice! I’m gonna sing my loudest so that I won’t to lose to any one of you! Alright, here we go!” 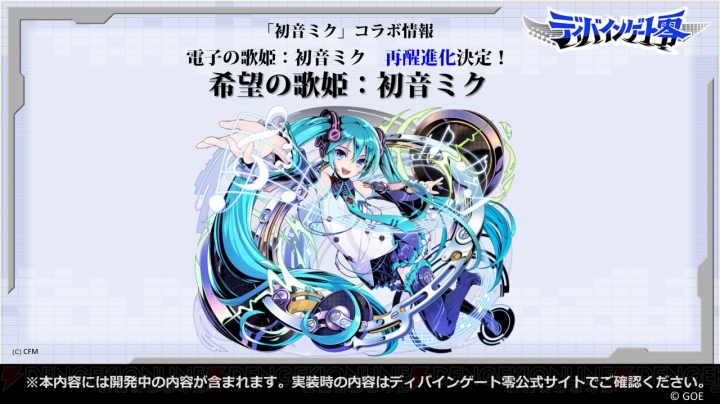 Profile: She’s able to sing skillfully in any genre, and her singing has the power to awaken the innate courage and hope within each person’s heart. Before anyone knew it, she was christened with the title of the legendary diva.

“As long as my singing can help someone, I will continue to sing. To me, there is no greater joy to be had than that…” 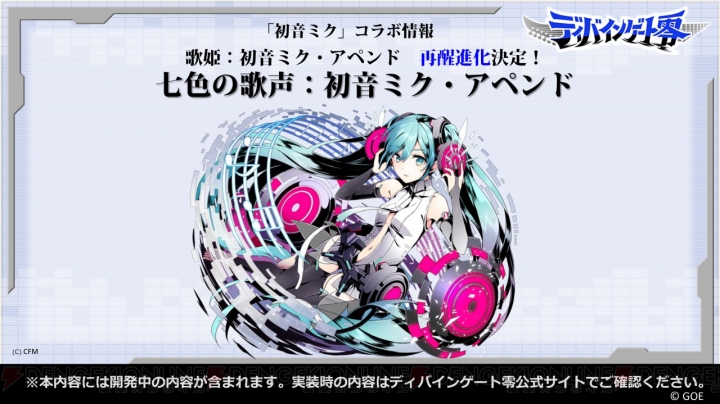 Profile: The diva has evolved even further, gaining a new voice, and a new identity, all to sing beautiful songs for us, believing that they can serve as a source of strength. 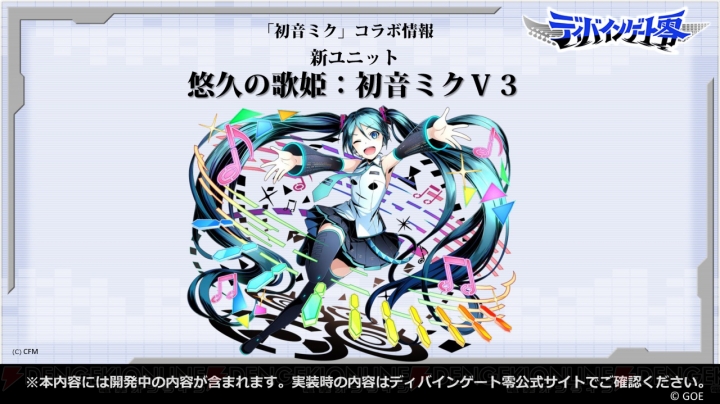 Profile: The diva continues to evolve, and her voice colors the world in fun colors, sad colors, colors of passion, colors of joy, and more. She beautifies the world just by being in it and singing.

“I will always sing for you, for all of you who are waiting eagerly to hear my song. So now, let’s sing together.” 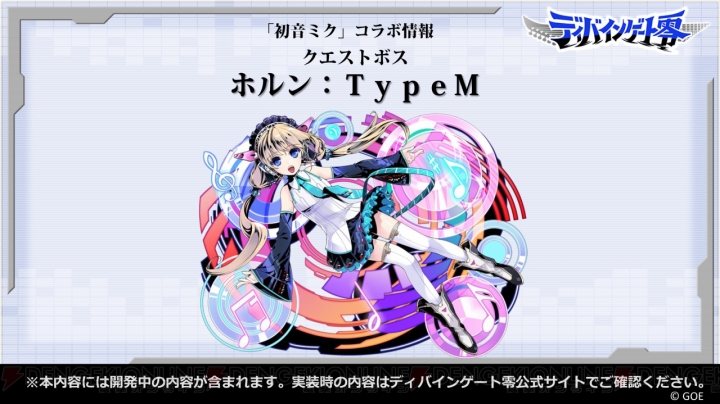 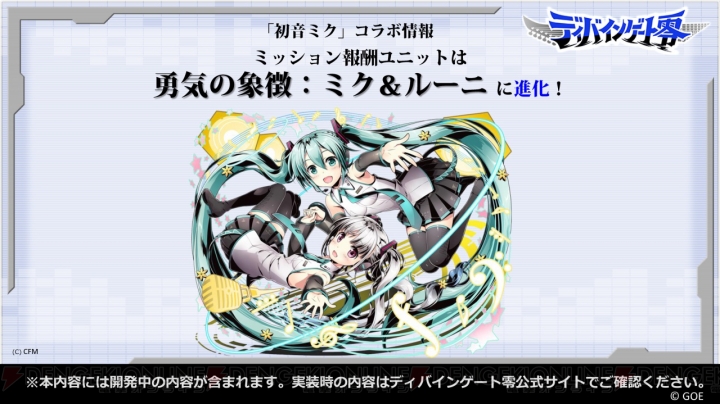 Proile: Runi was pleasantly surprised when she got an offer from the diva herself. Wearing her own handmade outfit, this little diva found herself standing next to and singing alongside the real deal. While doing so, she no longer looked like the brainiac that we all know, but instead just looked like a normal girl having a good time.

“Hehe, it feels a little weird to be wearing the same outfit and singing with her, but I guess two heads are more fun than one, even when it comes to music.”

Later on, 宮坊 (Miyabo) and さあや (Saaya) of Famitsu App sat down with Mister☆Divine himself to try out the new collaboration units in Super-Level (with all units at Level 1) and God-Level (all units at Level 20) challenges. You can see them in action in the below video on Famitsu App’s official YouTube Channel!

The video also reveals several Miku songs that will be used as background music during the collaboration missions:

And Famitsu App wasn’t alone. Several other video game channels also got the chance to meet with Mister☆Divine to demonstrate and explain the skill sets for the new collaboration units! 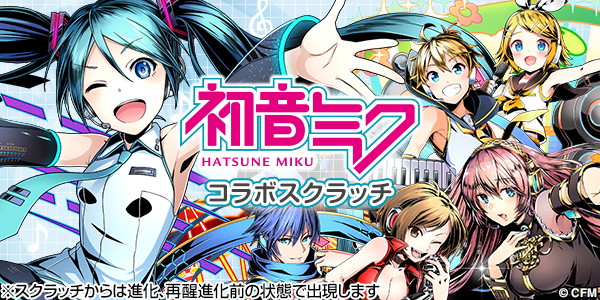 During the collaboration period, a series of missions will be made available for players to clear and earn special rewards, including “Hatsune Miku Points.” These special points can be used to purchase the Eternal Diva: Hatsune Miku V3 unit and more!

Each mission will also have an “EX” version which players can complete on Super-Level or God-Level difficulty levels for the chance to earn some Runi: Type M units!

Divine Gate ZERO is available for download on the App Store and Google Play, with the collab with Hatsune Miku running from now until November 6th. You can follow Mister☆Divine on Twitter to keep track of all the updates throughout the whole collboration period!

Hello! You can call me Marumain, and I serve as a translator between VNN in English and VNN in Japanese, translating articles between the two languages. I love pretty much every Vocaloid, though I consider MAIKA to be my favorite!
@MarumainElectro
Previous Tohoku Zunko x Ookami-Hime Collaboration Now Underway!
Next Hatsune Miku Dances Inside Your Computer With These Awesome Case Mods