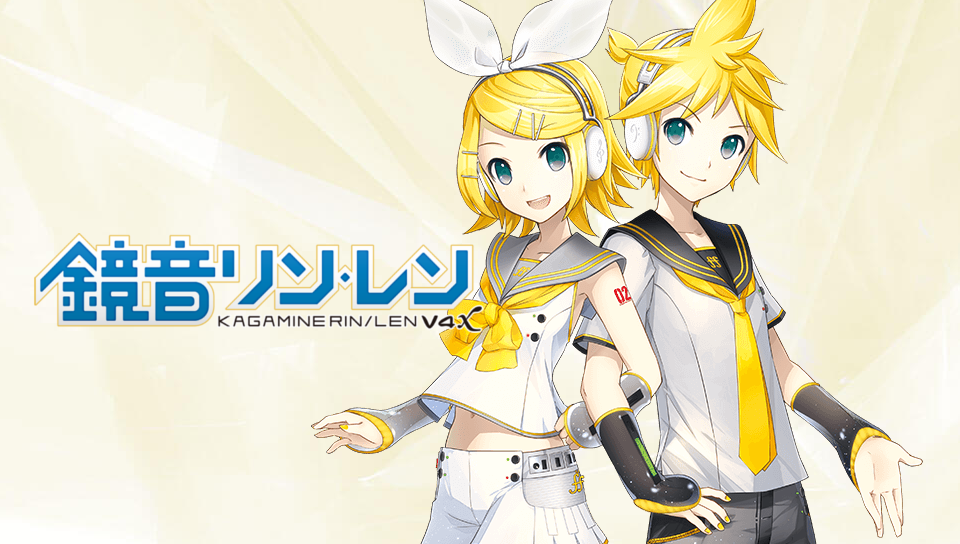 Kagamine Rin and Kagamine Len V4X were teased on a NicoNico Livestream yesterday, and today, Crypton has updated the product pages to reflect the reveal. Fans may notice that the final image doesn’t match the silhouettes that were featured on the product page and in the first demo. This is because, much like Hatsune Miku V4X Beta, the silhouettes featured were a placeholder that didn’t represent the final product.

In addition, Crypton officially announced that the Kagamines will be released for purchase on December 24th.

The official box art designs for the Kagamines take inspiration from the original costumes while changing and adding things in order to give them a fresh new look.

Some of the larger changes include Rin’s black shorts now being a white skirt/shorts combo and the speakers on their leggings having a heart on them. The sleeves also have a more futuristic look to them and the Kagamine’s eyes have gone from a bright blue to a more blue-green color that almost appears to be be split with a brown-ish color similar to sectoral heterochromia.

In addition to the design reveal, there is now a new demo for Kagamine Rin’s V4X Sweet: “Merry Christmas, My Hero” by LiveP.

She's a huge VOCALOID fan, a figure collector, and an all around nerd. Hoshi's been in the VOCALOID fandom since 2008 and has been a hardcore VOCALOID fan since 2013.
@VocaHoshi
Previous VOCALOIDs Dex and Daina Released!
Next Snow Miku 2016 “Snow Owl Ver.” Nendoroid, Figma and Tram Car Revealed Today in Sapporo