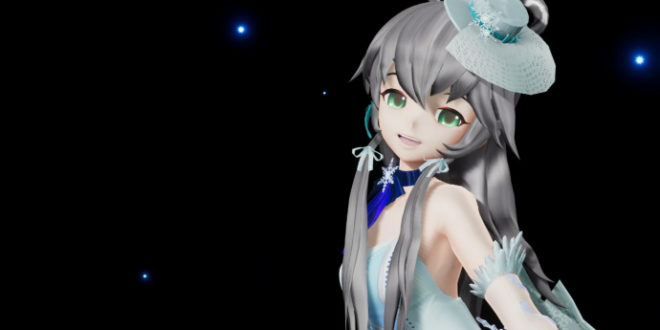 A few days ago, Vsinger uploaded a teaser video while announcing that Luo Tianyi would be performing at the Jiangsu TV Countdown Concert 2018. Later, they revealed Tianyi would perform a duet with famous male singer, Wakin Chow, and sing “Let it Go”, the famous tune from “Frozen”. This is not Tianyi’s first time to perform for a TV audience. She had been on the stage of Hunan TV multiple times, including The 11th Golden Eagle Art Festival and Hunan TV Coundount Concert 2017.

This is the first time that Tianyi sang in English for such an important event. With the help of AR technology, she magically built a snow castle while singing with Wakin, paying tribute to the famous Disney movie. Her English was tuned by Vsinger’s music director, Renxingtu, and MovingPoint P. Tianyi was also shown in a new winter outfit for this performance, which was designed by her V4 box art illustrator, TID.

After the performance, Luo Tianyi posted a series of screenshots on her official Weibo, while announcing the projects planned to happen in 2018, including a Vsinger live concert, goods, new figurines, new albums and more. Considering that two other new Vsinger VOCALOID, Mo Qingxian and Zhiyu Moke, are set to release in 2018, it seems likely that we will get more VOCALOID news from Vsinger in the new year.