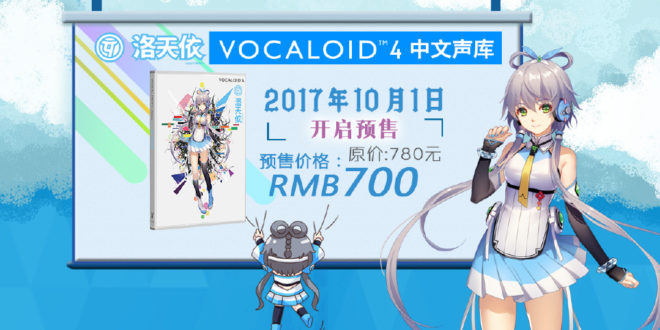 Ever since BML 2016, where we first heard the song 夜舞(Night Dance), we have patiently been waiting for Luo Tianyi’s v4. It was only till recently that we had more information on her, it was also later revealed that she would be getting a Japanese voicebank. Now, the wait for Tianyi’s v4 is over! Her preorders will open on October 1st at a price of 700RMB ($107 USD) , after her release, the price will be 780RMB ($119 USD).

It was also revealed that she will come with two voicebanks, [Normal] and [Power].

We do not know when her Japanese voicebank will be up for preorder, stay tuned to VNN for more information!

Luo Tianyi Will Be Performing at the Bilibili Macro Link!

A virtual singer lover with a dream of connecting the world of virtual singers together through VNN. Monds is also a huge rhythm game fan/player on his spare time.
@monds1234
Previous Hatsune Miku Appointed as the Ambassador for Cassette Store Day Japan 2017
Next LUMi Concert Debut at “Kagurasai 2017” Announced!