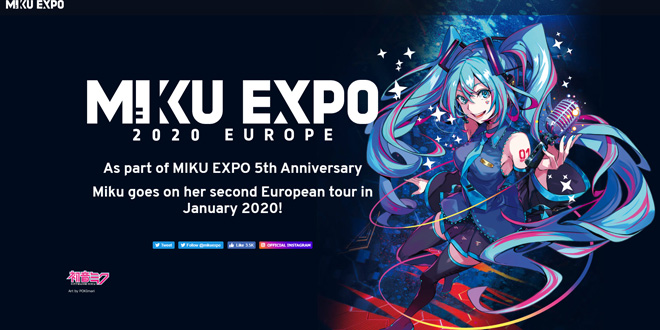 It is finally time! For our European Hatsune Miku fans’s enjoyment, Miku Expo 2020 Europe‘s dates and locations got finally revealed! Let’s check it out!

Not much time has been passed ever since Miku stepped in Europe for the first time, and it appears her supporters from said continent will be very happy to know that she’s going to London, Paris, Berlin, Amsterdam and Barcelona this time around!

This marvelous official artwork had been drawn by POKImari for the event, and it represents marvelously the locations we got this time! Below you can find the complete list of each date and location!

Ticket pre-sales will start on September 27th, and seems they will hold an anniversary song contest too, accepting every language possible!

Along with this tour we are planning a #MIKUEXPO5th Anniversary Song Contest!! Details will be announced on Sept. 27th when the ticket sales start. This time we will be accepting songs featuring Miku in any language!

Stay tuned for more details, and don’t forget to follow VNN for updates!