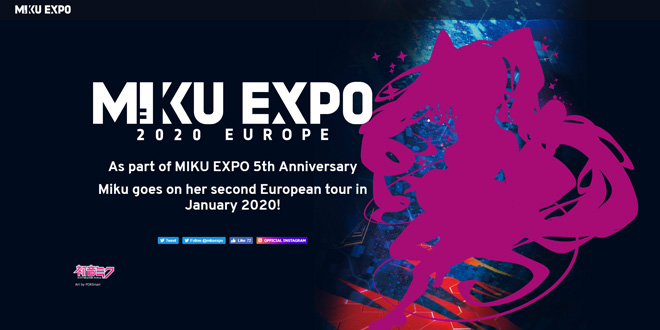 Hatsune Miku has become a worldwide phenomenon in the past years and her fans can be found almost in every country. The virtual diva has been travelling all over the world for her supporters through her Miku Expo tours, performing for them in various locations, and now she’s coming back to Europe this coming January!

Coming Back to Europe!

Miku already got a chance to perform for her European fans back in 2018, and it seems she is going to have a new tour there at the beginning of next year!

MIKU EXPO will return to Europe in January 2020 as part of #MIKUEXPO5th !! Dates and locations will be announced soon, stay tuned!!https://t.co/NNrXPCIRNw#MIKUEXPO2020

Right now we have no details about locations, dates, or even its main visual, but as the official Twitter says: those will be announced soon!