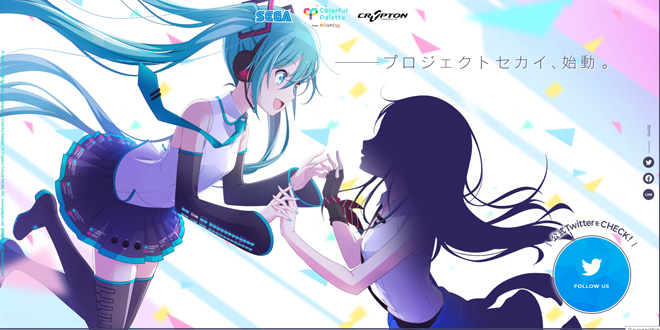 Today was a huge day for Hatsune Miku fans, as a lot of news was revealed today regarding our favorite virtual diva. Right beside lots of news regarding Project DIVA MEGA 39’s being released just few hours ago, we got a brand new game being teased by SEGA themselves: Project Sekai!

A new Adventure on Mobile!

Project Sekai appears to be a whole new game for smartphones featuring Hatsune Miku. It is born from a collaboration between SEGA, Colorful Palette (from Craft Egg, development team of BanG Dream! Girls Band Party!) and Crypton Future Media.

Aside from this fancy video teaser and a new Twitter account opening for this game, there are very little details about it!

We must wait and see what those companies will offer us, for all we can do right now is stay tuned!

Alongside the game’s sudden announcement, the team also decided to hold a Twitter campaign!

All you have to do is follow the game’s account and retweet its campaign tweet. If you follow these steps, attend Magical Mirai 2019 tomorrow and show the proof of it at their booth, you will get a clear file folder featuring the game’s main visual as gift!

Don’t forget to support the game by spreading the word, and of course stay with us on VNN for more news!