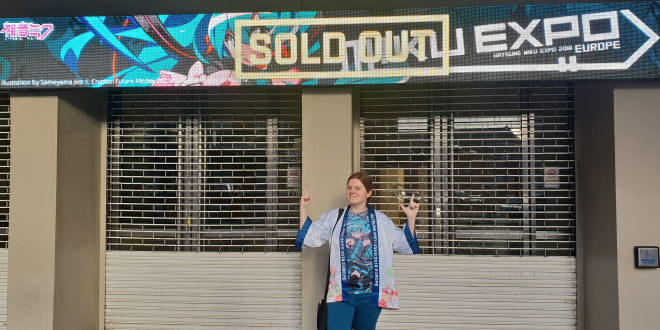 On December 8th (my birthday), Miku Expo Europe was held at the Olympia in London! Read on for my review of the event from start to finish, including details of the concert, workshop, exhibition, merchandise and interviews with other attendees.

The day before Miku Expo started in London, I was pleased to hear that the event had sold out so I had high hopes for the success of the event!

On the day of the Expo, we got all dressed up in our Miku finery and arrived at about 11:30 AM after a meet-up with other fans at a nearby coffee shop.

The Olympia did not open for the event until 1:00 PM but attendees were already queuing from 7:00 AM!

Fans kept themselves busy while they waited, socializing with each other and handing out free Vocaloid merchandise they had bought or made themselves.

cakey from VocaEuro even brought a cardboard cutout of O-Miku for attendees to take photos with and brought their own Piapro-style boards for attendees to sign and leave messages for the staff. 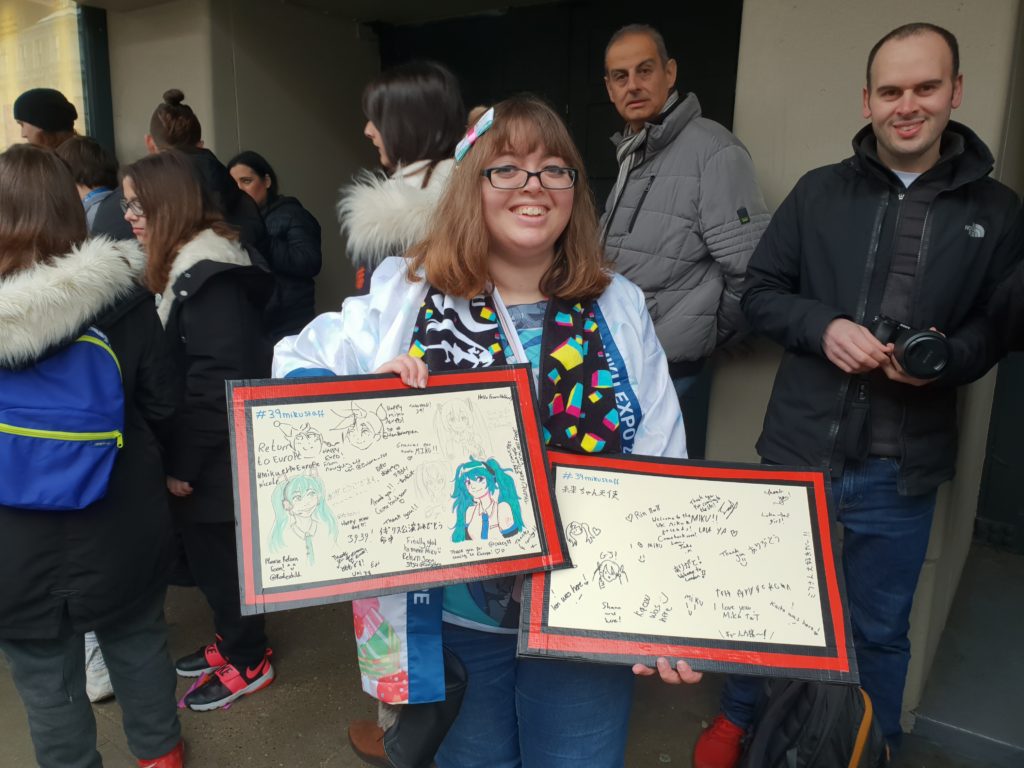 Some of the attendees had even set up a sort of ‘shrine’ next to the Olympia building, showing off all the Vocaloid merchandise they had brought with them to the event, with Vocaloid music playing in the background.

As with any concert, there was plenty of merchandise on offer for the Miku Expo Europe concert!

(Thankfully, we had managed to buy VIP tickets before they sold out and had already secured our own VIP merchandise!)

Read on for further details on the merchandise that was available and how the sales sessions worked.

The merchandise that was available both online and at the venue included:

On top of the merchandise that was available for pre-order, there were more items that were only available from the venue itself.

Attendees were advised to fill out an order sheet stating the number of items they wanted to make purchasing easier.

Those who purchased VIP tickets received exclusive VIP merchandise including:

Merchandise sales started at stalls within the venue from 1:00 PM and 4:30 PM.

Items sold out very quickly in the first session, which was open to all attendees, but VIPs got another chance to purchase from 4:30 PM onwards, where more stock was available. All attendees could then purchase items again from 17:30 PM.

We found that the keyring and happi were particularly hard to get hold of, but, thankfully, I had pre-ordered my happi from the website and, though I missed out on getting any merchandise in the first session, I was quite pleased that I was able to purchase the venue exclusive keyring and blanket in the second session.

If you are planning on going to Miku Expo yourself, I would definitely advise you to pre-order what you can and get in line early for venue exclusives, perhaps taking advantage of the VIP ticket entry if you can.

One of the highlights of Miku Expo was a Let’s Paint Workshop from 1:30 PM to 4:30 PM, in which attendees could purchase, design and paint their O-Miku figures.

The O-Miku figures cost £30, while designing on the provided templates and painting with the provided materials was free.

There were also free items available to those who attended the workshop, such as stickers, postcards and clear files.

Once painted, attendees could place their figures on the Piapro Showcase table to show them off to others. I noticed that plenty of other Vocaloid-related items also made their way onto these tables!

As seen in other concerts, there was a Piapro Wall present at the Expo for attendees to write and display their messages.

Plenty of O-Miku designs also appeared on the wall!

There was also a map of the world for attendees to mark where they were from.

At all of the Miku Expo Europe concerts, it was apparent from these walls that there were attendees from all over the world, including Japan, South Africa and even an island near Madagascar!

As the workshop came to a close, it was time to head over to the concert!

After buying myself the keyring and blanket I wanted, we got into the VIP standing area at about 5:00 PM, so that we could get a good spot at the front before the concert started at 7:00 pm. 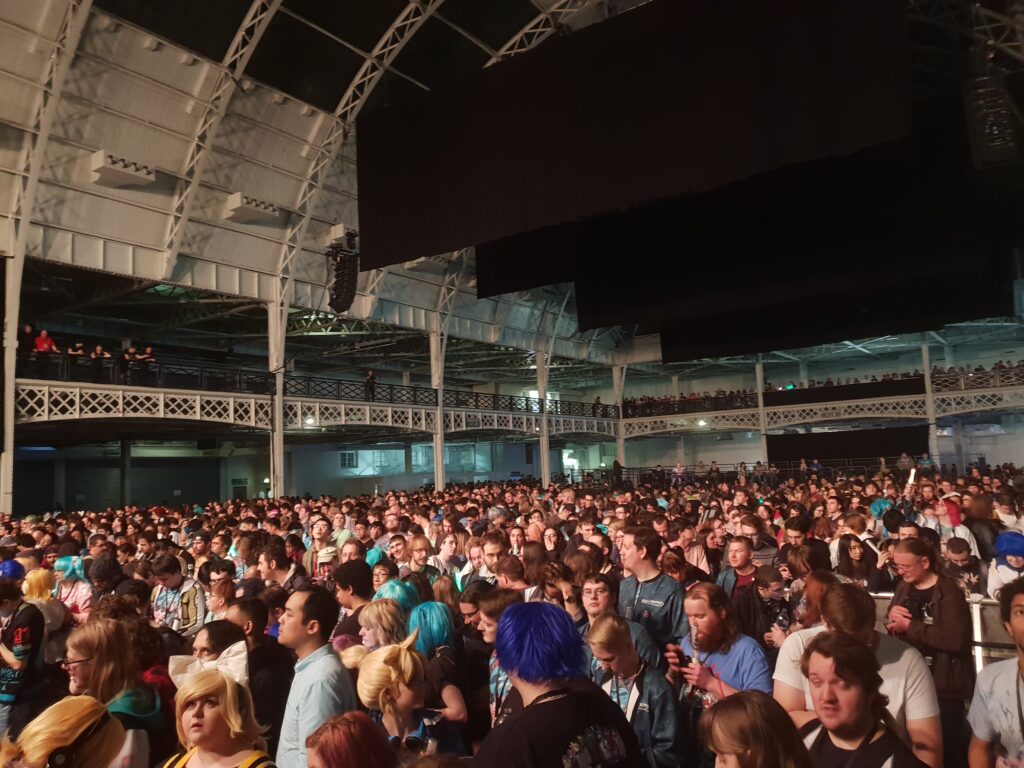 We admittedly had sore feet from standing for 2 hours but it was well worth it once the concert got underway!

The performance was amazing, with great song choices, masterful music from the live band and some awesome effects!

The crowd were really fired up too, waving their glowsticks in time to the music and coordinating the colours of the glowsticks with the performers as they appeared on stage. 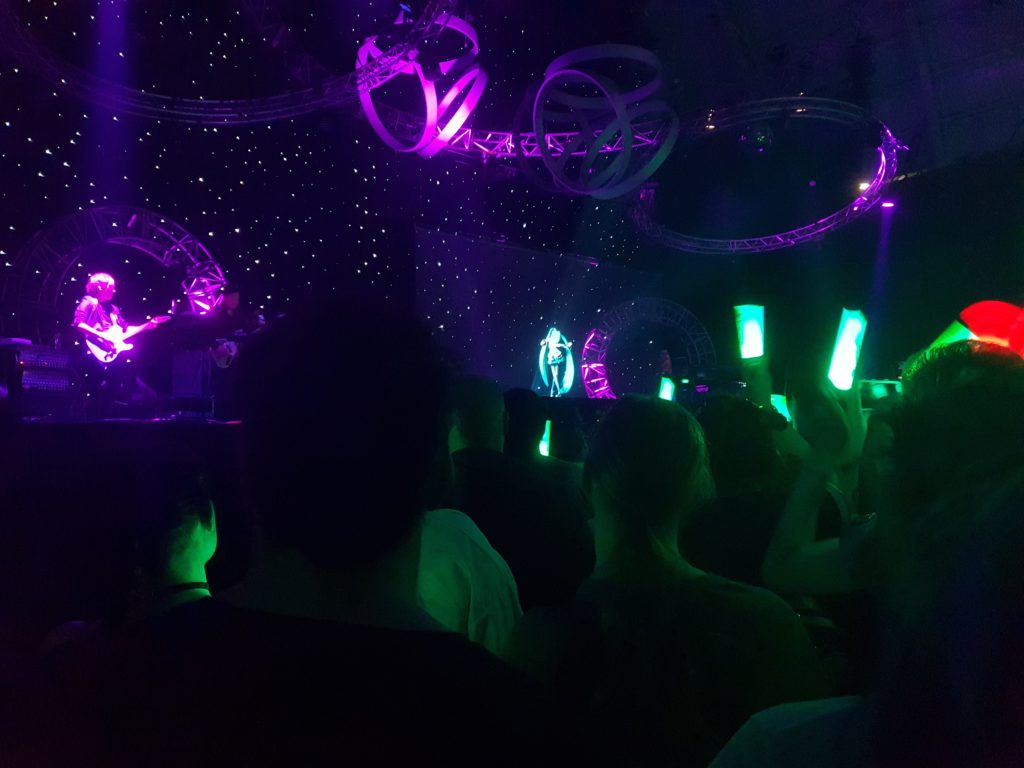 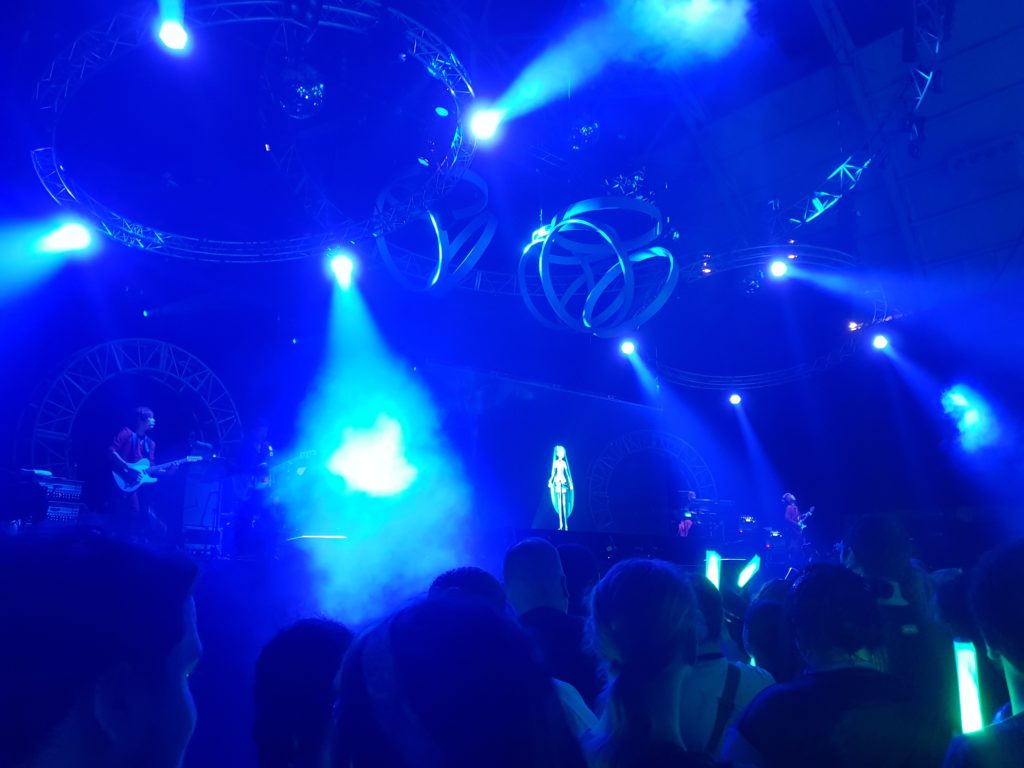 I tried not to take too many pictures during the concert itself, so as not to ruin the fun for myself or anyone else around me, but here is an image from the official photographers to give you a better idea of the atmosphere in the concert that night.

If you are wondering which songs were performed at the London concert then look no further!

The following songs were performed as part of the London setlist for Miku Expo Europe.

(Please note that the setlist was slightly different at the other concerts in Europe.)

After some intense chanting of ‘Miku!’ and ‘Encore!’ from the crowd, London were also treated to an encore performance, which included the following songs.

My personal favourites from the setlist were Birthday by ryuryu and the theme for Miku Expo Europe, Music Like Magic! by OSTER project.

In Birthday, it was such a beautiful sight seeing Miku following the star around stage, with a black backdrop lit up like the night sky, twinkling with starlight. (I might have gotten a bit weepy at that…)

As for Music Like Magic!, I had been so excited to hear the theme live and it did not disappoint! I was especially happy to see people performing the dance moves and singing the backing vocals during the chorus. The outfit that Miku wore for the song was also really cool and was designed by the artist, Nicolas Buffe.

Not really setlist related, but another highlight for me was when the concert came to a close and silver and green confetti burst forth from the stage over the cheering crowd.

For those who were lucky enough to catch the confetti, there was a special message printed on it in French, German and English.

In English, it read: ‘So happy to finally meet you, can’t wait to see you again!’ Let’s hope that means that Miku Expo will return to Europe in the near future! 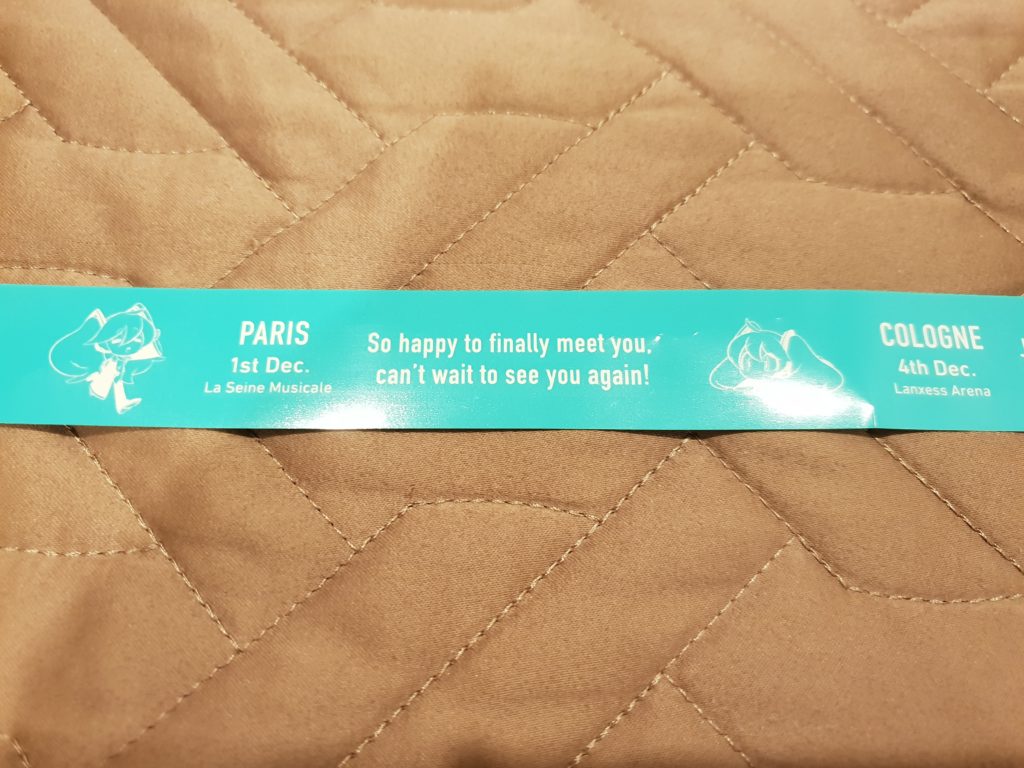 During my time at Miku Expo London, I met with and talked to many members of the community and got their impressions of the day. I also managed to have in-depth interviews with Garrick, from Zero-G, and Aki Glancy (aka. EmpathP), Vocaloid producer and manager of VOCAMERICA.

Read on for the full details.

Comments from the Community

Here are the comments I got from members of the Vocaloid community, highlighting their impressions of the day.

“Words cannot express how excited I am!”

Here are the interviews I conducted with Aki Glancy and Garrick, getting their own impressions of the day and their thoughts on the future for Miku Expo and the Vocaloid community.

Intro: I am Aki Glancy, known as EmpathP, and I am a Vocaloid producer from the United States.

Q: First of all, can I ask how you got into Vocaloid?

Q: So, how did you actually get into the music production side of things?

A: I was in university for animation and I just wasn’t really having much fun with it. It wasn’t really my passion. And I didn’t know what my passion was so it’s actually my friend, CircusP, who inspired me to start writing or at least experiment with writing music. I just kind of took a risk. I downloaded a trial for a music program and then saw if I could do it… I just gave it a shot and then lo and behold I’d done my first original song and it just kept flowing afterwards.

Q: So, nowadays you’re running VOCAMERICA, your own Western Vocaloid project. How did that even come in to being? Where did you first get the idea to do something like that?

A: VOCAMERICA originally started out as just an idea to show off Dex and Daina after they’d been released. I wanted to do a little thing at a panel that I was hosting and have Dex and Daina dancing for them and show off their voices. But then I got it in my head… Why don’t I try to expand this into an event where I can have other Western Vocaloids perform and I just kind of took a risk. It was a very, very risky move and a very expensive one… I got it in my head that I have always wanted to see a concert with Western Vocaloids performing and if I didn’t do it myself, nobody else was going to do it.

Q: So, we’re here at Miku Expo today. You’ve been to the US concerts before haven’t you? So, how would you say this compares to the US?

A: Well, the last one I went to was in DC and I would say this one is bigger. I would say this one is bigger primarily because (at) the last one they had in the US, they had a whole bunch of dates and a whole bunch of different cities so people could spread out and go to the different ones, whereas, this one is the only one in Great Britain, so, if you don’t come to this one then you better be prepared to travel a long way to go somewhere else. So I think because of that, in terms of the crowd, this one is so much bigger. You have people coming, not only from Great Britain, but from the surrounding countries who couldn’t go to either France or Germany.

Q: Last question: How do you think the day’s been? How do you feel about Miku Expo in London?

A: The day’s been fantastic! I have seen so many people come up to me and ask me “Oh, are you Aki Glancy?” or “Are you EmpathP?” I’ve been getting hugs and taken pictures with them and seen what they’ve been working on. I love being a part of this community and seeing what people create and what energy they bring to an event like this. It’s fantastic.

Intro: Hi my name’s Garrick and I work for Zero-G.

Q: Can you tell me what your impressions are of Miku Expo?

A: It’s very… I think the word I used to describe it earlier was humbling. It’s such a large community and… the community is so diverse in age range, walks of life. Yeah, it’s really incredible! The sense of community is amazing.

A: Way bigger! I knew that the Olympia was a very big venue and when I knew they’d sold out I was like ‘Okay, they must have shrunk it a bit.’ but… it’s completely full! It’s a completely full venue. Yeah, it’s huge… It’s almost overwhelming.

Q: It’s looking successful, so do you think perhaps Miku Expo will come back?

A: I’d be very surprised if it didn’t come back. I think the turnout in terms of families and community sets a really strong precedent for, if not another European tour, just a London one.

I would definitely go again and I hope that Miku and her friends will be back soon! 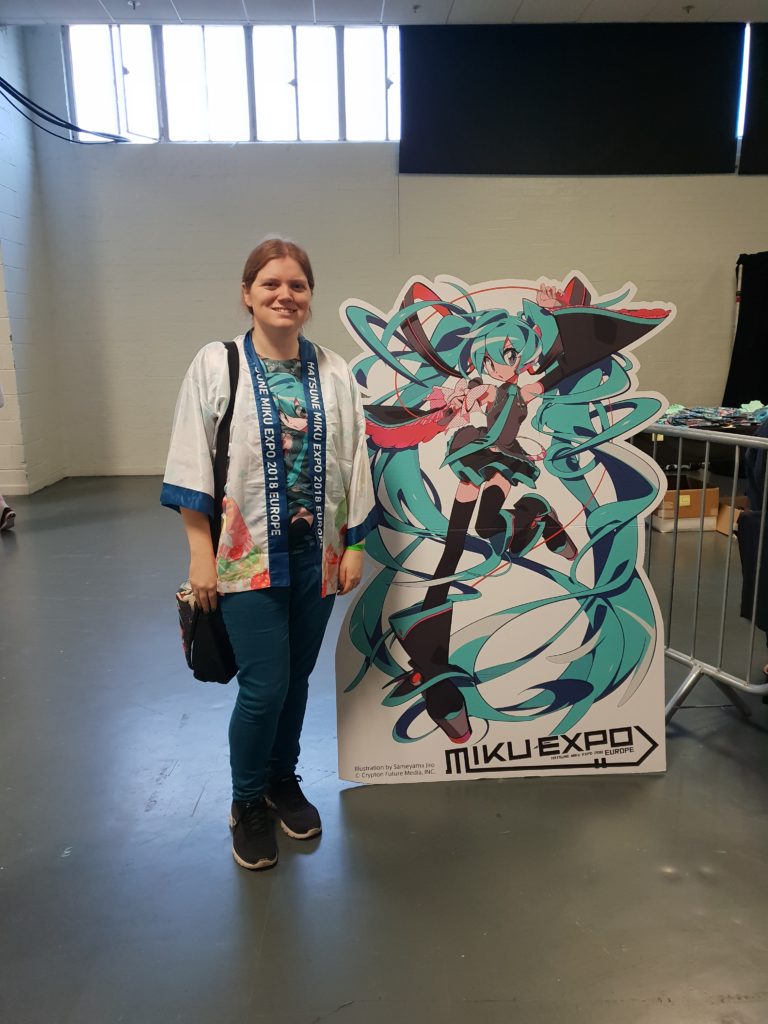 Jade is an artist, writer and musician based in the UK, who has a particular fondness for Vocaloids. Her favourite loids are Fukase, Oliver, Gumi and IA.
@jadekaibap
Previous Hatsune Miku x Yomiuri Land Collaboration!
Next SNOW MIKU LIVE! 2019 Day 1 & 2 Setlist, After Report Gallery Published