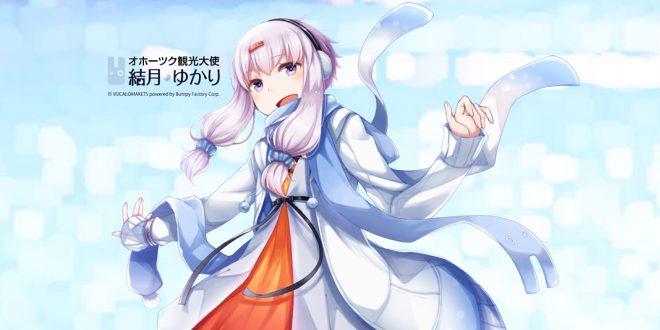 Back in September of this year, the official website for Okhotsk Ambassador of Tourism Yuzuki Yukari opened! 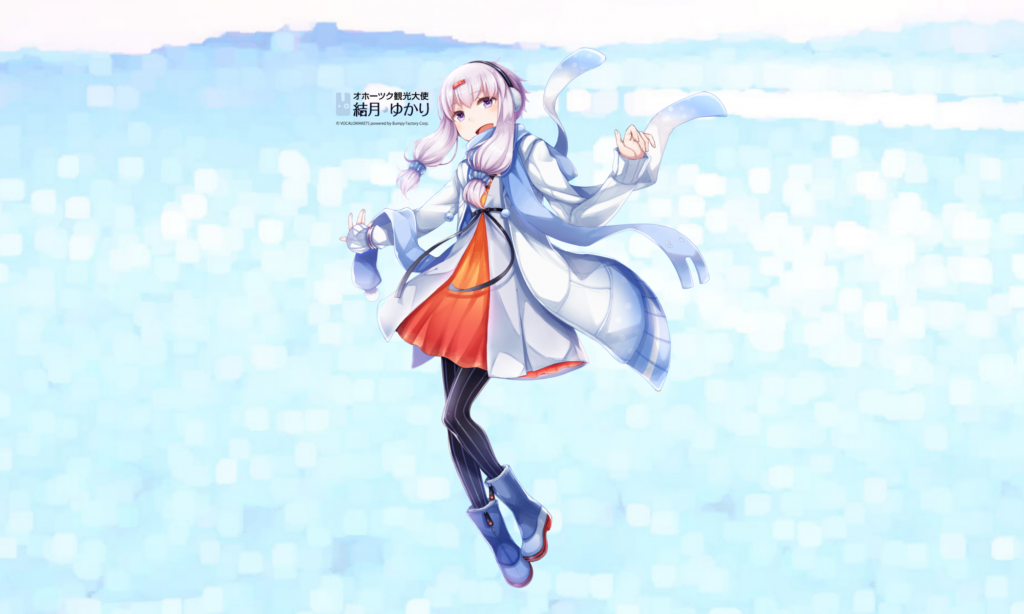 The website begins with a welcome message, which reads as follows:

The site will be managed by PROJECT R.Y.U.H.Y.O., a team of students at the Kitami Institute of Technology who formed in order to promote the Okhotsk region alongside their new Ambassador of Tourism, Yuzuki Yukari. 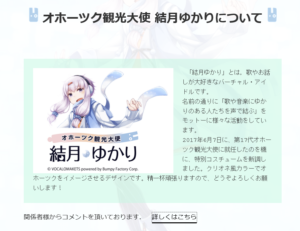 After the welcome message and updates, there is an About section for Yukari, which reads as follows:

“Yuzuki Yukari is a virtual idol who loves to sing and chat. True to her namesake, her title is ‘She Unites You All With Her Voice.’ On June 7th 2017, Yukari was inaugurated as the 17th Okhotsk Ambassador of Tourism and received a brand new design. Featuring a clione-like color scheme and motif, her new design perfectly captures the spirit of Okhotsk. She will be working very hard at her new role, so we hope everyone can cheer her on!”

One of the first updates made on the website is a page full of celebratory comments and messages shared by those involved in the project. Here are some of the exchanges that took place at Yukari’s inauguration ceremony back in June:

“What are your thoughts and feelings on Yukari’s inauguration as the Okhotsk Ambassador of Tourism?”

Bumpy Urushi (representative of VOCALOMAKETS):
“For Yukari to first be inaugurated as the mascot of the Memanbetsu Airport, and now as the Okhotsk Ambassador of Tourism, I am absolutely overcome with emotion and gratitude for everyone!”

Akasakof (VOCALOMAKETS):
“We christened Yukari with her name because of all the connections that we’d like to see her help people form. I hope she continues to help bring more people together as the Okhotsk Ambassador of Tourism.”

Tomohide Ogata (President and CEO of AHS Co. Ltd):
“No matter how many opportunities we have had to work with VOCALOMAKETS to help promote Yuzuki Yukari, I am still overcome with emotion to see her inaugurated as the Okhotsk Ambassador of Tourism. This was made possible because of everyone who has loved and supported her for so long. Thank you all so much.”

ChomP (VOCALOMAKETS):
“As a member of Yukari’s development team, it makes me so happy and proud to see her inaugurated as the Okhotsk Ambassador of Tourism.”

KagomeP (VOCALOMAKETS):
“To see Yukari’s name spread so far and wide, “happy” is the only word that can earnestly sum up my feelings.”

azuma (VOCALOMAKETS):
“I’m absolutely delighted. As someone who can’t travel to Hokkaido that easily, I think this has been the perfect way to finally come.”

What do you hope for Yuzuki Yukari now that she is the Okhotsk Ambassador of Tourism?

Bumpy Urushi:
“I hope that she will help grow the tourism industry in Okhotsk, as well as serve as a bridge that connects people in and out of Okhotsk together.”

Akasakof:
“I hope that she can help bring many of her fans to the Okhotsk region. I would be delighted to see her visage be used for life-sized displays, souvenirs, and even see her become something of mascot for the whole region.”

Kihee:
“True to her namesake, I’d like to see her help form all sorts of bonds and connections for people throughout Okhotsk.”

ChomP:
“I hope to see Okhotsk Yukari get accepted and embraced by everyone all throughout Hokkaido, and see her do a splendid job fulfilling her role as the Ambassador of Tourism.”

KagomeP:
“Whenever I fly somewhere on a business trip, I always look forward to seeing each airport’s mascot character (my favorite one so far is Sorayan of the Itami Airport). I hope that Yukari, too, will become such a character that people will look forward to meeting when they come to Okhotsk.”

azuma:
“I expect to see her used for a lot of Okhotsk’s regional specialty goods. Speaking of Okhotsk, I think that approaching the concept of a real-life Escape-the-room game set in Abashiri Prison can help propel her into the news.”

Is there anything else that you would like to express?

Bumpy Urushi:
“Yukari was able to come this far thanks to everyone’s amazing support. We hope you all will continue to show the same level of support for her!”

Akasakof:
“As a Hokkaido native, I feel an especially strong sense of connection to Yukari as the Okhotsk Ambassador of Tourism.”

Kihee:
“I would be delighted to see lots of people take interest in and visit Okhotsk thanks to Yukari.”

Impacts on the Okhotsk Region

Since the site opened in September, it has been featured in the Hokkaido Shimbun newspaper, which reports on all the biggest stories going in Hokkaido. NHK News also interviewed some of the members of PROJECT R.Y.U.H.Y.O. at the Kitami Institute of Technology, where Associate Professor Fumito Masui explained “Yukari’s fans exist all over the country, and I hope that our activities here will attract many of them to come visit the region. ” They also revealed that an English version of the site is in the works as well.

In its most recent update, the site reports that a life-size standup display of Yukari in her special ambassador outfit has appeared at the Satellite Office Kitami in Kitami City, as well as at the Kitami Institute of Technology. They welcome anyone who would like to take pictures with her to come pay them a visit. According to the VOCALOMAKETS blog, these are only the first of a many such promotional appearances for Okhotsk Yukari all throughout the region.

“For all the latest updates on Okhotsk Ambassador of Tourism Yuzuki Yukari, and on her life-size standup appearances, please check out these sites.
Official site: http://okhotskyukari.info/
Official Twitter: @okhotskyukari“

We at VNN are fully aware that our report on the opening of the Okhotsk Ambassador of Tourism Yuzuki Yukari website has been a long time coming, and for that we apologize to our readers. However, you can rest assured that we will be watching the website very closely for any major announcements and events, and report on them on a timely manner from now on. Stay tuned to VNN for all your Okhotsk Yukari updates!

Hello! You can call me Marumain, and I serve as a translator between VNN in English and VNN in Japanese, translating articles between the two languages. I love pretty much every Vocaloid, though I consider MAIKA to be my favorite!
@MarumainElectro
Previous Tohoku Zunko Available in R.C. Voice!
Next “MIKU With YOU” Concert Updates: Trailer, Tickets, and Merchandise Info!