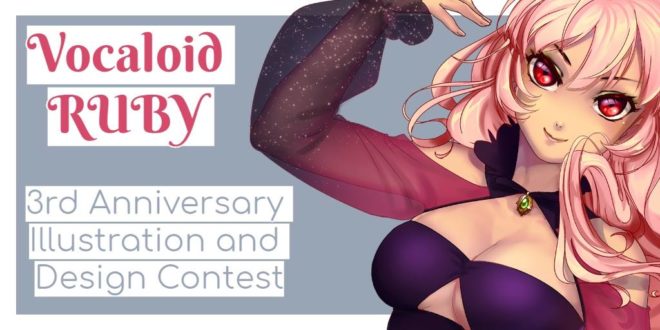 In celebration of RUBY’s 3rd anniversary, a contest has been announced today! The contest is for creating an illustration and the other for creating a design!

Creative fans can show their love for RUBY by creating an original illustration for RUBY and they can also create an original character design. On top of that, they are offering some money as prizes.

Be sure to follow the rules if you are considering participating:

Submit your work to [email protected]. All submissions will be reviewed and judged by Misha, Artemi & seica. Be sure to use the Hashtag #Vocaloid_Ruby if you upload your submission to social media!

Winners will be announced on the official Vocaloid Ruby Twitter and Facebook accounts on November 7th and contacted to receive their prize shortly after the announcement.

Additionally to the contest, RUBY also got a new alternative design illustrated by Artemi. Her voice provider Misha created her stunning and beautiful outfit together with seica. This new design called “Astéri” gives RUBY a more mature look, as if she grew up in the last 3 years!

If you would like to know more about RUBY and the contests, visit the following sites: