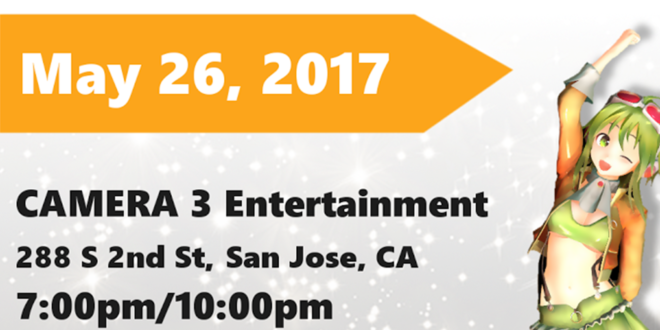 The fan-run VOCALOID concert project “Synthesized Reality Productions” has announced their first ever officially recognized concert. While they’ve worked with Internet Co. for some time, this will be their first concert officially supported by Internet Co.

Synthesized Reality Productions is a fan-run VOCALOID concert project that brings VOCALOID concert experience to Western con-goers. While the experience isn’t quite as high tech as Miku Expo, it’s also something smaller and more affordable for cons. They use MMD models and animation to bring to life VOCALOIDs that many fans know and love.

Unlike VOCAMERICA, SRP doesn’t focus on Western VOCALOIDs. Instead, they tend to show popular Japanese VOCALOIDs and UTAUs in their concerts. While they do have permission to use these VOCALOIDs, it’s of course only for non-profit ventures. They make no money from these concerts.

In addition, fans can expect to see special guests at the concert as well!

If you’ll be in the area, be sure to check it out!

She's a huge VOCALOID fan, a figure collector, and an all around nerd. Hoshi's been in the VOCALOID fandom since 2008 and has been a hardcore VOCALOID fan since 2013.
@VocaHoshi
Previous 1/8 Scale Figure Yuzuki Yukari Police Ver. Pre-orders Open in Pulchra Online Store
Next Yuzuki Yukari Mobile Battery Packs Available for Pre-order