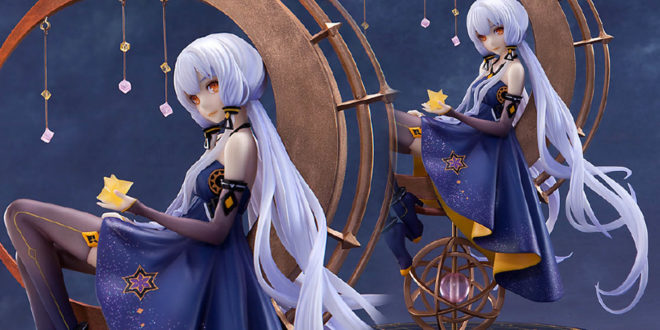 Fans of Stardust flocked to grab her 1/8 scale figure when it was announced. However, those fans received an email later on that she’s been delayed. This is good news for fans who missed out, though! While those who pounced on the orders are waiting, other shops still have pre-orders open. The Stardust 1/8 scale figure is still available on Tokyo Otaku Mode!

While most sites are listing Stardust as shipping in June 2017, TOM says she’ll ship in August 2017. Nonetheless, a few extra months are nothing if you really want this figure and missed out on the other pre-orders! Unfortunately, the figure will only ship to Canada and the United States.

If you want to grab Stardust, you can do so here.

Please note that TOM takes money out of your account the moment you pre-order.

Great Deal on Vsinger “Language of Flowers” Mini Figures, Too!

If you love all of the Chinese VOCALOIDs, TOM also has the Vsinger Mini Desktop Series – Language of Flowers Ver. Box Set available as well! And they have one heck of a deal on it. Not only are the figures 10% off, costing only $50.40 USD, but also you receive $21.55 USD (42.76% cash back) in TOM Points! These figures can ship everywhere except for China, Hong Kong, Japan, Taiwan.

If you’d like to grab them, be sure to do so here. They’ll ship within two business days of your order.

We also have a review of the figures available for anyone who would like to see them before they buy! If you want detailed pictures, we have a whole gallery available as well!

Be sure to grab both of these deals before they’re gone!

She's a huge VOCALOID fan, a figure collector, and an all around nerd. Hoshi's been in the VOCALOID fandom since 2008 and has been a hardcore VOCALOID fan since 2013.
@VocaHoshi
Previous Nendoroids Kagamine Rin & Len Harvest Moon Ver. Revealed!
Next Three New Heroes Debuting in #C.O.M.P.A.S.S.