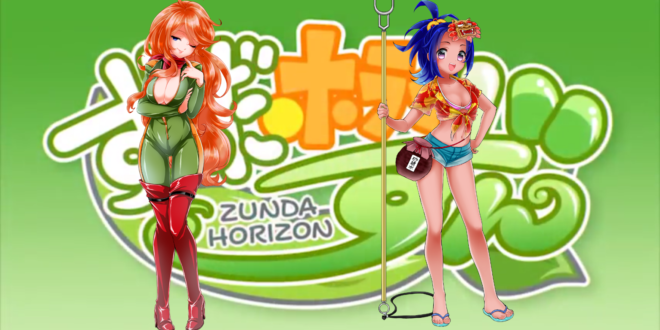 Last week, the first batch of UTAU voice banks used for the characters in the anime Zunda Horizon were made available for public download and use. This week, two more voice banks have been released, getting fans ever closer to having access to the voices of the entire cast!

Hobbies: She has an insatiable foot fetish. She also enjoys tooling and tinkering, but has the faults of a speed maniac who focuses too much on velocity.

Abilities: Her helmet, which she calls the “Masked Mask,” has the ability to heighten the senses of its wearer. She can also infatuate and spellbind other people with the pheromones that she emits from her hair. However, when she’s wearing her Masked Mask, those pheromones end up spellbinding her, releasing her from the restraints of sense and reason instead.

Aspirations: Growing the snack industry in Hokkaido. That, and indulging herself in Zunko’s feet.

A first-year middle school student at Furusato Girls Academy. An untamed and free-wheeling lone-wolf type, though out of all the characters in Zunda Horizon, she is actually the most intelligent. Also possesses a rather foul mouth.

Abilities: Her harpoon, which she calls the “Awa-mori” (mori or 銛 meaning “harpoon,” in this case), has the power to enhance the instinctive abilities of its bearer. She can also get drunk on sugar water and enter a drunken fighter state.

Aspirations: To live freely, as if carried off by the will of the wind.

There are still more Zunda Horizon characters whose voices banks haven’t been released yet, so stay tuned to VNN for updates on them!

Hello! You can call me Marumain, and I serve as a translator between VNN in English and VNN in Japanese, translating articles between the two languages. I love pretty much every Vocaloid, though I consider MAIKA to be my favorite!
@MarumainElectro
Previous Yuzuki Yukari 5th Anniversary Talk Festival “KATARI” Announced!
Next EMANCIPATION Album Now Available!