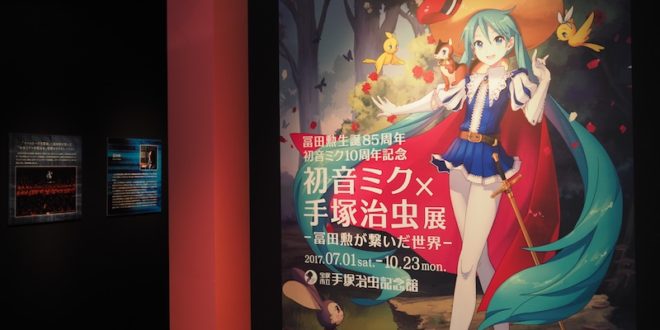 This is NAT of VNNJP reporting on the Hatsune Miku x Osamu Tezuka Exhibit ~ Worlds Connected by Isao Tomita event, which has been taking place at the Osamu Tezuka Manga Museum in Takarazuka City since July 1st. I had the honor of attending the exhibit on its opening day, and I am here today to present my full report.

With a Hatsune Miku Mini Theater, tons of goods on sale, and of course the Osamu Tezuka and Hatsune Miku crossover art exhibit, there’s a lot to cover at the event, so let’s get straight to it.

Upon stepping into the exhibit room, I was treated to a series of panels explaining how this collaboration came to be. One of the songs that Miku performed at Symphony IHATOV was none other than the opening theme song to Osamu Tezuka’s classic anime series, Princess Knight, a song that Isao Tomita himself wrote. It was that performance that served as the inspiration for this entire exhibit.

From there, I went to the main attraction of the event: the Hatsune Miku x Osamu Tezuka crossover illustration exhibit.

This exhibit features the works of no less than 11 different artists who drew both crossover and original illustrations for some of Osamu Tezuka’s most iconic properties. Written below each of the displays was even commentary from their respective artist.

As for the projection equipment used, it resembled something of a miniature version of what was used at Isao Tomita’s Dr. Coppelius, almost like a Pepper’s ghost concert. With rather lackluster equipment and pretty blurry imaging for Miku, this mini theater didn’t leave a very strong impression on me, to be frank.

At an introduction corner for Miku, there were panels detailing who Miku is for those in attendance who don’t know her.  Software packages and rough character sketches for the Crypton Future Media VOCALOIDs were also on display, as was a life-size figure of Miku.

At the gift shop were all sorts of goods based on the crossover illustrations up for sale, alongside the regular museum merch. You can check out our previous article for more details.

Many restaurants around the museum even had special menus as part of the Hatsune Miku x Osamu Tezuka Osamu Exhibit commemoration. They were offering up all sorts of scrumptious dishes based on Miku and the rest of the Crypton Future Media VOCALOIDs. Ordering these dishes would even net you some can badges featuring the crossover illustrations from the museum. I myself got to enjoy chowing down on quite a few of them.

This concludes the report of my trip to the Tezuka Osamu Manga Museum on July 1st.

My favorite parts were getting to see the exhibit for all the crossover illustrations, as well as dining on the special event menu items. The fusion of Hatsune Miku and Tezuka Osamu’s works had a surprising amount of chemistry to it. Every single one of the illustrations on display at the museum was an amazing work of art, and I for one thoroughly enjoyed my time there.

The bullet train ride to Takarazuka from my hometown of Yokohama was a 3-hour sojourn (one way), but it was absolutely worth the time. Look forward to my next report!

横浜のボカロファンです。VNN Japaneseのメンバーとして、日本語記事の校正や、イベントのレポート記事作成を担当します。ボーカロイド関連イベントのカレンダーサイト「VOCALENDAR」 http://vocalendar.jp/ の編集メンバー。ボカロ関連ニュースサイト「週刊ボカフロ」http://vocafro.hatenablog.com/ の編集者。 I'm a VOCALOID fan from Yokohama, Japan. I serve as a proofreader of VNN Japanese articles, and make report articles. I'm the one of editing members of the calendar site of VOCALOID events, VOCALENDAR http://vocalendar.jp/ , and the editor of "Weekly Vocafro", VOCALOID news site http://vocafro.hatenablog.com/ .
@nat0468
Previous Crypton VOCALOID-Themed PC Glasses by Washin are Coming!
Next VNN Interview with BIGHEAD!