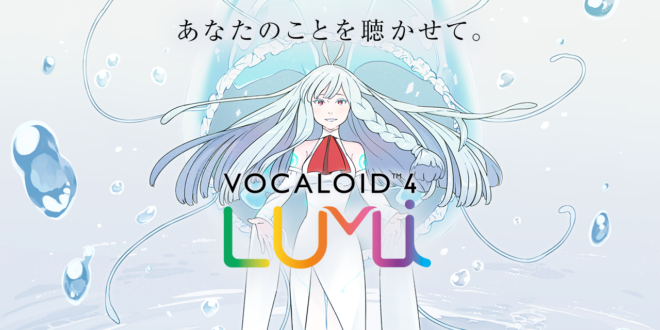 June 3rd officially marks the unofficial LUMi day! Much like with many other virtual synths, there’s a pun that gives LUMi her own day. “Lu/Ru” sounds close to “Lo/Ro,” which is what the Japanese word for 6 (“roku”) starts with. And we all know “Mi” can be for “3” (3/9=Miku Day). We can’t help but wonder if AVA thought of this in advance before releasing LUMi’s free trial on this day! AVA also announced a LUMi song contest and even demos featuring her voice.

LUMi is available for a 30-day free trial to anyone interested. While you have to register to download her trial, you don’t have to actually have a Japanese address. You must fill out all fields in order to download LUMi but you don’t have to fill them out with a legitimate address. AVA has expressed surprise at people outside of Japan being interested in LUMi and are happy to help people should they have a hard time downloading her.

You can find the free trial of LUMi here.

To download LUMi’s trial version, register as a user on LUMi’s official site by entering your preferred email into the boxes pictured below. You can also register with your Facebook account.

As mentioned, all parts of the form must be filled out. If you aren’t a Japanese resident and don’t have a prefecture in Japan, don’t worry! AVA has said to simply use Tokyo as your prefecture. AVA is excited to see fans from all over the world wanting to try her!

LUMi’s trial version will expire 30 days after being installed.

In addition to the free trial, there’s also a song contest!

In celebration of the release of the trial, AVA and Nana Music are teaming up to hold the first “LUMi DTM Creator Contest” through the nana music app starting on June 5th.

The contest is accepting song entries made with LUMi’s trial version. The entries that make it to the final round will be played on a special music program on the Nippon Cultural Broadcasting radio station on July 8th. The program will be hosted by Kaito Ishikawa as well as Miyu Takeuchi of AKB48. The overall winning entry will also get an original music video made for it, which will be shown at LUMi’s debut concert.

While there isn’t much information available, we do know AVA plans to have LUMi’s concert debut in September of 2017. So stay tuned to VNN for updates!

Of course, no VOCALOID is complete without demos! AVA brought many famous producers together to make demos for the new VOCALOID. You can check them out below.

For more information on LUMi, be sure to follow VNN and check out the links below.

She's a huge VOCALOID fan, a figure collector, and an all around nerd. Hoshi's been in the VOCALOID fandom since 2008 and has been a hardcore VOCALOID fan since 2013.
@VocaHoshi
Previous New VNN Project, VOCALOID Rhythm Games
Next Goodsmile Racing Opens 2017 SPA Sponsors Courses Until July 21st