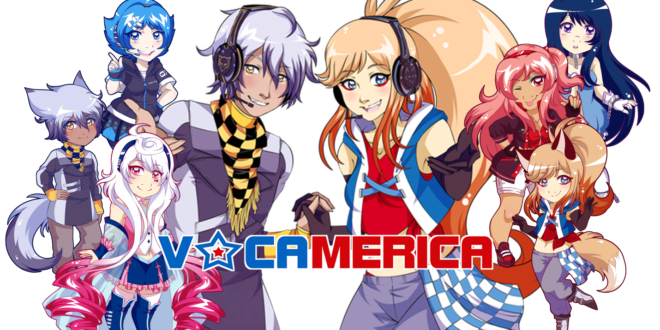 VOCAMERICA is just a few days away. The concert will be held at NekoCon in Hampton, Virginia and it’ll be the first western VOCALOID concert of its kind. And, with concerts comes merch! If you’re planning to go to NekoCon, be sure to check out VOCAMERICA on Saturday at 4PM. And while you’re there, you’ll have quite a bit of merchandise that you can grab as well. You’ll have tons of VOCAMERICA merch to choose from: everything from keychains to plushies will be available at the concert!

All non-Kickstarter-Exclusive keychains will be available at the event. You can purchase DEX, DAINA, RUBY, Namida, Aiko Kikyuune, and MAIKA keychains for $8 USD each. These keychains are double-sided acrylic, so you don’t have to worry about the design getting scratched!

In addition, you can cosplay as one of the performers to get a FREE keychain.

remember guys, you can get a free #VOCAMERICA keychain if you come to see me at Nekocon cosplaying as any of our Vocaloid/UTAU performers.

The performers are all of the singers who have keychains listed above.

There will be two T-shirts available at the event: Team Flufferpuffer and the VOCAMERICA t-shirt. Both shirts will go for $25 USD. If you wanna show your western VOCALOID pride during NekoCon, this is definitely the biggest way to do it!

If you want the official soundtrack to the concert, grab the album for $15 USD! You can listen to a crossfade below.

Obviously, it’s a must-have and a great way to support the concert! It includes a lot of exclusive songs/remixes that we haven’t heard anywhere else yet. There will only be 87 copies available, however, so get there early to grab yours!

And if you want to support EmpathP even more or you just like to collect all the albums, she’ll have other albums available from Empathy Studios as well. These CDs will range from $5 USD to $12 USD. She hasn’t revealed yet which CDs she’ll have, so you’ll have to check out the merch sales for yourself!

17×11 posters of western VOCALOIDs will be available for purchase as well! These posters will cost $15.

These are Some of the posters we will have for sale at #VOCAMERICA pic.twitter.com/tyA0lZo4PQ

While not all of the designs have been announced, EmpathP did show a few of them on Twitter. So once again, make sure to get to the merch table to see all the goodies!

If you’re looking for an adorable momento, grab one of the limited edition plushies! And then immediately go into cuteness overload. These pudding plushies by Neko Kitty Studio are of DEX and DAINA, and will cost $30 USD each.

Hey Kitties! The Vocamerica Plush are all packed up and ready to go home! This was such a large project and we enjoyed…

They’re definitely limited, so be sure to get there early if you want one of these cuties! In addition, if the plushies sell well, EmpathP will look into getting plushies of other western VOCALOIDs made.

I promise, if the #VOCAMERICA DEX and DAINA plushies sell well, I WILL look into getting plushies of other western vocaloids made

So, as always, be sure to support what you love so more can come from it! If you don’t support VOCAMERICA, it may not continue. VOCAMERICA merch is helping to pay for this concert. It’s completely free and even NekoCon wasn’t charged. Everyone did amazing with the VOCAMERICA Kickstarter, but the concert is round two! So if you didn’t get something in the Kickstarter, want to grab some holiday gifts for friends, or even have a VOCALOID loving friend going to NekoCon, be sure to grab some merch and check out the concert!

Merchandise not sold during the concert will likely go up on a Storenvy store so that fans who weren’t able to attend NekoCon can get their hands on things. Stay tuned to VNN and EmpathP’s Facebook and Twitter for announcements concerning the online store.

She's a huge VOCALOID fan, a figure collector, and an all around nerd. Hoshi's been in the VOCALOID fandom since 2008 and has been a hardcore VOCALOID fan since 2013.
@VocaHoshi
Previous Snow Miku 2017 Update: New Website Artwork And Event Schedule Info!
Next The Yuzuki Yukari Racing Project Goes into High Gear!