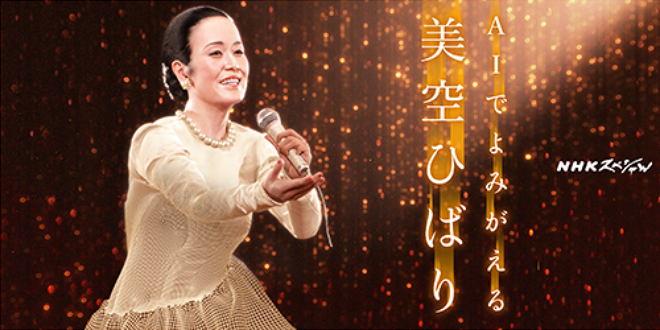 Yamaha announces VOCALOID: AI to debut this month on NHK!

Yamaha has announced a new deep learning technology called VOCALOID: AI, which will be showcased via NHK on September 29th!

We have all the details of the upcoming broadcast and this new AI technology below.

In the NHK broadcast, the VOCALOID: AI technology will be used to reproduce the voice of Hibari Misora, 30 years after her death.

Hibari Misora was a singer, actress and cultural icon before she passed away in 1989, at the age of 52.

In this performance, a life-size 3D model shall be projected to recreate Hibari Misora’s image, much like in the VOCALOID concerts we have seen previously.

The project was carried out under the leadership of the Japan Broadcasting Corporation (NHK) with a large number of collaborators, including Yasushi Akimoto, who has produced the new song that will be performed.

This broadcast will be the first time that VOCALOID: AI will be shown off to the public and put to practical use.

Then, by using the collected samples of the singing voice, VOCALOID: AI is able to learn the nuanced qualities of that voice, such as it’s timbre and expression.

When is the broadcast?

The broadcast is scheduled for Sunday, September 29th, from 9pm to 9:49pm JST.

You can find more information on the performance here.

We are very excited to see where this new technology takes VOCALOID in the future! Keep an eye on VNN for further updates on this new artificial intelligence technology.

Jade is an artist, writer and musician based in the UK, who has a particular fondness for Vocaloids. Her favourite loids are Fukase, Oliver, Gumi and IA.
@jadekaibap
Previous BIG AL’s 10th Anniversary Celebration is Underway!
Next IA Crowdfunding Campaign launching soon!