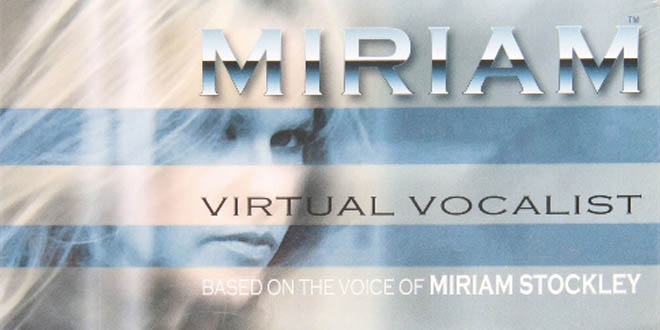 A little over 24 hours ago, Zero-G posted on their Facebook page asking for suggestions for new libraries. While the initial response was rather slow, the post suddenly exploded today with quite the request! In addition to asking for a new VOCALOID and various other updates, fans were in huge support of Miriam receiving an upgrade.

While fans are hyped about Miriam V4, there are a few things to remember. Despite the human Miriam being ready to record and Zero-G’s social media staff saying they’ll pass on the message, there’s no guarantee. While fans have shown their interest, Miriam was an expensive VOCALOID to make. Depending on the cost, Zero-G may not find it feasible to update.

However, they’ve definitely acknowledged the demand! While they haven’t promised she’ll happen, they have noted that Miriam V4 would make a lot of fans happy. While other VOCALOIDs were requested for updates, Miriam was noted to be the “firm favorite” by Zero-G social media.

Miriam is currently unavailable due to lack of serial codes. As a V1, she was discontinued quite some time ago. And because no new codes have been generated, she could no longer be sold once the codes that did exist were used. This unfortunately left fans unable to obtain her. However, an update would solve this problem and provide fans with an updated voice bank.

Unfortunately, as previously mentioned, there’s a lot that would go into updating Miriam. There’s no promise that it will happen even with Miriam Stockley being in support of the update.

Thanks for all the Vocaloid support! If enough of you write in to Zero-G, maybe we can get a happening, up-to-date version out there! ??❤️

As some fans may remember, she noted she’d love to do an update all the way back in 2015.

So sorry – didn't see this until today.
I'd love to do an updated version of Vocaloid. The technology has come on in leaps & bounds. ?

Fans were excited for a VOCALOID Miriam update back then as well. However, it has yet to happen. Only time will tell if, with the interest expressed by fans, Zero-G will decide to update the VOCALOID Miriam voice bank. Hopefully they will, though!

While fans definitely made it clear that they want Miriam V4, there’s no promise. Unfortunately, the company can only do so much. Even with there being demand, there is a chance she won’t happen. But that doesn’t mean that fans should lose hope! No matter what, continue to support VOCALOID companies so that they can continue to make VOCALOID products that you can fall in love with! No matter what Zero-G does next, it’s definitely going to be great.

She's a huge VOCALOID fan, a figure collector, and an all around nerd. Hoshi's been in the VOCALOID fandom since 2008 and has been a hardcore VOCALOID fan since 2013.
@VocaHoshi
Previous Hatsune Miku 10th Anniversary Fair ~Sing to the Banner! Hatsune Crew!~ Goods Announced
Next Magical Mirai 2017 Updates: Art Gallery, Goods, Workshop, Music Area, Sand Planet Screening, DJ Live Events