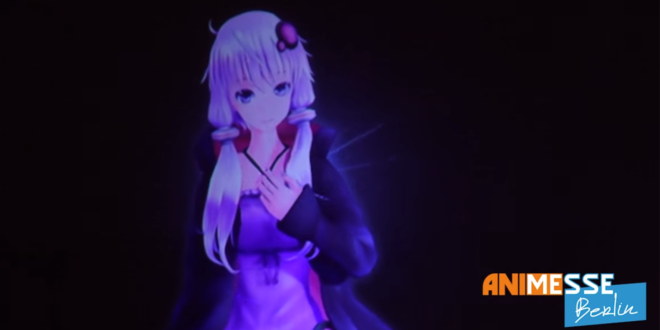 On February 22, 2017, AHS held a special National Cat Day live stream (available for viewing on FRESH!) to announce some exciting news! This episode was emceed by MARS16 designer and representative director, less-Kitayama, who has been responsible for designing many Yuzuki Yukari and Tsurumaki Maki merchandise for the AHS Store! Also present was AHS President and CEO, Tomohide Ogata, as well as special guest, singer/songwriter, and voice actress, Haruko Momoi!

One announcement should excite many German fans: AHS will be hosting a VOCALOID concert, “Songs Love,” for the second year in a row at Anime Messe Berlin! The anime convention will take place at the KOSMOS from June 23rd to the 25th, with the AHS VOCALOID concert scheduled to take place on the evening of Saturday, June 24th at the KOSMOS’ massive concert hall, capable of seating thousands of people! To give you an idea of what it may feel like to be there, check out the trailer below for last year’s concert at Anime Messe Berlin 2016!

Ogata wanted to make it clear, however, that while last year’s concert also featured human singers like Yukari’s voice provider, Chihiro Ishiguro, this year’s concert will be strictly VOCALOID-only.

UPDATE: New details have emerged for some of the workshops that AHS plans to hold at the fan event. Ogata himself will be there on hand to explain how life-size 3D images of the performing VOCALOIDs can be projected to appear onstage, and also explain the technology that makes such a concert possible. Furthermore, AHS will be setting up a booth at the convention where they will be showcasing and selling their VOCALOID software,  and where there will be “something special” for German VOCALOID fans!

To keep up-to-date on all things Anime Messe Berlin 2017, you can follow their official Facebook page as well as visit their official site! While you’re at it, be sure to check out the trailer for the event to further whet your appetite!

Hello! You can call me Marumain, and I serve as a translator between VNN in English and VNN in Japanese, translating articles between the two languages. I love pretty much every Vocaloid, though I consider MAIKA to be my favorite!
@MarumainElectro
Previous Vsinger “Language of Flowers” Mini Figures Review
Next Production of “Zunda Horizon” Now Complete!