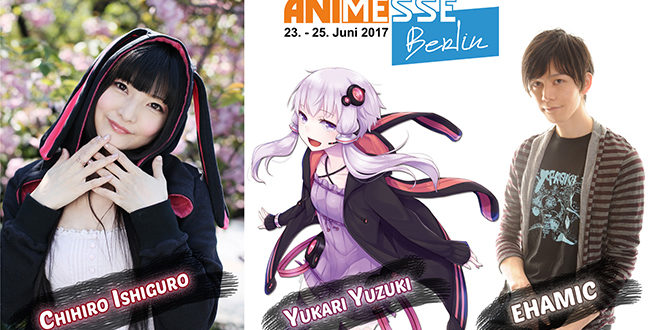 AHS now has quite a reputation for creating successful VOCALOID concerts in Japan; Berlin, Germany; and Vienna, Austria! This year, AHS will return to Berlin, however, the concert will feature only VOCALOIDs. Yuzuki Yukari’s voice provider, Chihiro Ishiguro, won’t be at the show. The news was met with some displeasure from both the fans and Chihiro herself.

This is the reason why Michael Klement of Anime Kultur Verein (German for “Anime Culture Society”), who also organized Anime Messe Berlin, has started a Kickstarter campaign to get both Chihiro Ishiguro and the musician EHAMIC at the show. EHAMIC has produced multiple songs for Chihiro to be on site at this year’s convention. The convention is being held from June 23rd to the 25th at the KOSMOS in Berlin, Germany.

What is the Anime Kultur Verein?

The Anime Kultur Verein was founded in 2014 by 20 anime and manga fans/friends in Berlin, and has been trying ever since to bring more of the anime, manga, and Japanese Pop culture to Germany. Last year, they organized the first VOCALOID concert in Germany featuring AHS on the huge stage at Anime Messe Berlin.

In collaboration with AHS, they were able to confirm the concert for the convention as well as acquire the equipment needed. The problem is that Chihiro Ishiguro would like to perform along with her VOCALOID on stage, together with the live music by EHAMIC.

A link to the Kickstarter can be found here as well as at the end of the article.

The goal of the Kickstarter is to enable Anime Messe Berlin to pay for the travel cost and accommodation expenses (which is €4000 EUR) for both guests. In addition to that, they would like to be able to perform at the concert on Saturday. They also hope to have their own concert on Sunday. Please note that AHS is not directly involved in the Kickstarter and this is being done entirely by Anime Kultur Verein.

A digital autographed card which is going to be sent out by email after the convention.

Along with the digital version, you will be getting a physical autograph!
+ Digital Autographed Card

A VIP seat for both concerts as well as the opportunity for a special meet-and-greet with a small group of people where you can get more in touch with both.
+ Digital Autographed Card
+ Physical Autographed Card
+ Poster with Autograph
+ Yuzuki Yukari Keychain
+ Ticket for Friday, Saturday, and Sunday

A VIP seat for both concerts as well as the opportunity to join them during dinner at the convention on Saturday.

Along with the different options for the rewards, you can also choose not to receive the rewards or to donate an amount of your choice. Please note that some rewards are exclusive!

If you want more information on the Kickstarter, you can find it here. If you would like to stay up-to-date on con news, you can follow both the Facebook pages of Anime Kultur Verein and Anime Messe Berlin (German).

You can also stay tuned to VNN for any updates!

dotkrawl is a German Vocaloid and UTAU user, gamer and huge singthesizer fan. He acts as the translator between VNN German and English if necessary. Other than VNN he's mostly working on a German UTAU Reclist and respective voice banks. He's also an Admin on the German Vocaloid Wiki.
@dotkrawl
Previous “VOCALOID yumemi nemu” Album Now Available for Pre-order!
Next VNN’s Visit at Hanami!