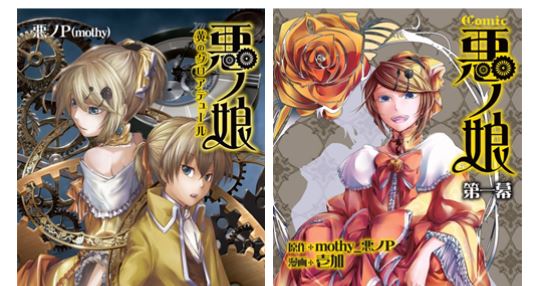 The tragic VOCALOID song series “Story of Evil” has recently gained a lot of popularity due to the “Daughter of Evil” musical that took place back in June. And now, the hype continues as the story is distributed in digital comic form!

HarperCollins Japan’s first digital publications will be the “Daughter of Evil: Clôture of Yellow” light novel, and the “Daughter Evil: Act 1” comic. In the future, the company will aim to release more digital comics and novels based on VOCALOID songs such as “Secret ~Black Vow~,” “Secret Police,” “Sakura no Ame,” “Prisoner,” and “Paper Plane.“

HarperCollins Japan will be working with PHP Institute, VG Books, and Enterbrain KCG Books to get their VOCALOID song comics and novelizations published and distributed digitally for the reduced price of ¥600 (~$5), excluding tax.

Under the “Character Vocal Novel” label:

Under the “Character Vocal Comics” label: