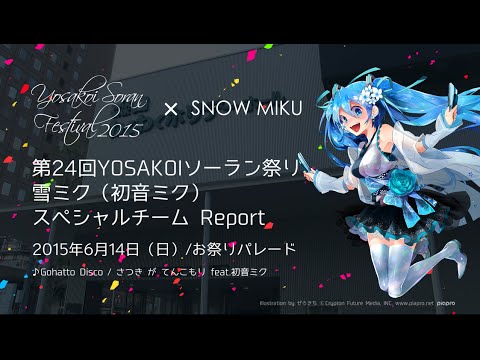 The popular song Gohatto Disco was released earlier this year on the official Miku Channel with talk of it being part of the YOSAKOI Soran Festival in Sapporo, Crypton’s home town. Now Miku Channel has given us a video of the young dancers who took to the streets in the festival, dancing in the Yosakoi style while donning special t-shirts featuring the special Snow Miku design in the song’s promotional video, and some of the girls are even sporting twin tails.

If you’re in need of something adorable, look no further.

She's a huge VOCALOID fan, a figure collector, and an all around nerd. Hoshi's been in the VOCALOID fandom since 2008 and has been a hardcore VOCALOID fan since 2013.
@VocaHoshi
Previous Hatsune Miku Event at Hirakata Park Features First Life Sized Luka
Next Ruby: The Controversial VOCALOID