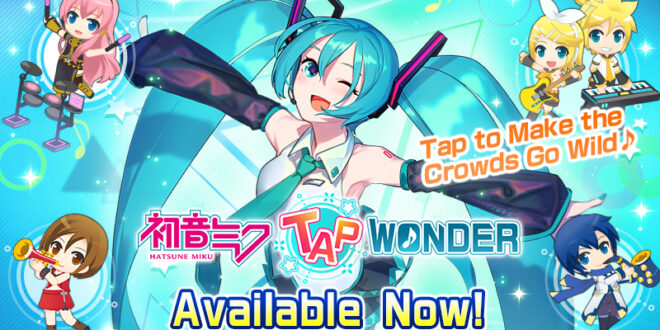 Within Hatsune Miku – Tap Wonder, or “MikuTap,” you help Hatsune Miku pump up the crowd at her concerts with the simple tap of your fingers! As players progress through stages, they will unlock higher level concerts that grant new costumes to customize her appearance, while recruiting Miku’s friends to help along the way!

Links to download the game are at the bottom of the article!

Pump up the Concert Crowds by Tapping Your Smartphone

As you tap, Hatsune Miku sings and dances on stage! Make sure to tap as quickly as you can to increase the venue’s Voltage to clear through stages!

Many original costumes are included in the game! Try to collect them all, and customize Miku’s look with what pleases you the most, whenever you want. So cute!

Rin, Len, Luka, KAITO, and MEIKO appear to help Miku’s performances as Support Figurines. Each of them have multiple variants that feature a variety of both instruments and costumes alike! By unlocking these Support Figurines and placing them on the stage, they will provide backup to concerts – increasing the Voltage you obtain.

Progressing through the game’s stages will let you unlock these adorable characters! As you level them up, they can activate special bonuses as well!

Original Background Music and Pets: Created by YOU!

Through tremendous support by fans, the game’s background music and pets that appear in-game have been created by creators submitting their works to the collaboration site Piapro. We say a heartfelt “Thank you” to all of you!

Original Illustrations of Hatsune Miku that you won’t see anywhere but MikuTap!

As Hatsune Miku levels up through your hard work, various active skills will become available for you to utilize. Every time you activate one of the skills, an original illustration of Hatsune Miku will be displayed! These have been made by popular illustrators and can only be viewed in Hatsune Miku – Tap Wonder.

A Game of Joy and Excitement Awaits You!

We at VNN hope that each and every one of you will try this wonderful game out! I certainly know I’ll be tapping my days away to Miku’s songs and concerts! There’s something so satisfying about tapping to the music and seeing big numbers pop up while doing so…

Inspired by Miku since '07 -- a Vocaloid/virtual singer fan ever since.
Previous For Fans by Fans Special Discount!
Next VOCALOID Collection ~Winter 2020~ Fan Festival Announced!