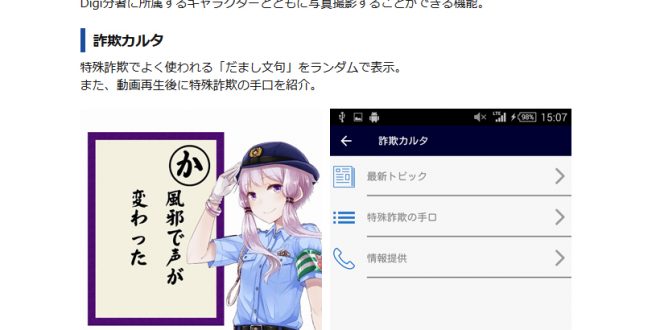 What do crime prevention, karuta cards, and VOCALOID/VOICEROID Yuzuki Yukari all have in common? Probably not much, until the release of Digi Police! With this app, you can study up on the most commonly used phrases by phone scammers, all alongside newly-commissioned Police Woman Yukari!

Telephone scams have been a serious thorn in the side of many police agencies in Japan. Some forms of phone scamming have become so prevalent that they’ve even been given names, such as the infamous (and tragically effective) “Ore ore sagi” frauds.

Enter Digi Police, the crime prevention and alert app from the Tokyo Metropolitan Police Department. Through this app, with a single tap of the finger, anyone can quickly and easily get the latest crime alerts, locations to avoid, safe routes to take, a loud buzzer to sound if you find yourself in a dangerous situation, and more! And, of course, it wouldn’t be a Japanese app if it didn’t give rise to its own popular mascot character, Tewatasanaiinu!

Of particular interest to VOCALOID fans was how Digi Police also introduced us to Police Woman Yukari! This officially-recognized Yukari derivative quickly became one of her most popular designs, and is even getting a figurine!

The way that Police Woman Yukari appears in-app is through the “Scam Karuta” feature. When you open this feature up, you’ll be able to view, look up, and even listen to many of the suspicious-sounding phrases that phone scammers like to use so that you’ll be better alerted if you were to ever receive a call from them. For example, in order to swindle money out of unsuspecting victims, phone scammers like to start calls with lines like “Have I got a job offer for you,” or “I got a surefire way to win big at the horse races,” or the ever-lame “My voice sounds different because I caught a cold” for pretending to be loved ones in dire need of cash. Each phase can even be recited by Yukari’s voice bank for you to listen to and practice recognizing! So the more that you listen to Yukari through this app, the more alert you’ll be to possible phone swindlers! Who knew that listening to a VOCALOID could have the potential to save your money from getting stolen?

Hello! You can call me Marumain, and I serve as a translator between VNN in English and VNN in Japanese, translating articles between the two languages. I love pretty much every Vocaloid, though I consider MAIKA to be my favorite!
@MarumainElectro
Previous ani-t is Now Accepting jam BAND x Yuzuki Yukari T-Shirt Designs!
Next Free VOCALOID Seminars to Be Held at NOAH College!