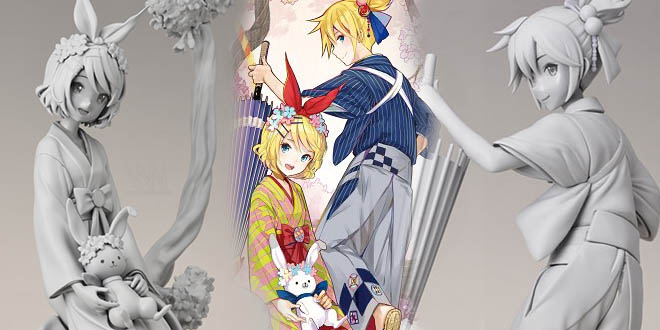 It’s been about a year and a half since the first VOCALOID in the Hanairogoromo (flower clothes) series was released. This series started with Miku, followed by KAITO and MEIKO, and most recently, Megurine Luka. And now, finally, the Kagamine twins have their time to shine! The Kagamine Rin & Kagamine Len Hanairogoromo figure prototypes were revealed!

All of the figures in this series are based on an illustration by 藤原 found here. In addition, these figures are rather unique in their sales as well. While fans are used to grabbing figures from tons of sources, these have rather limited locations. You can pre-order at Snow Miku Sky Town if you’re in Japan. Otherwise, you’ll have to use a few select retailers to grab them.

The Kagamine Rin & Kagamine Len figures are the last in the series. Much like the others, they’ll likely be 1/8th scale. Pre-orders open up on July 15th, but until then, we don’t have too much info.

Of course, that likely means that the fully painted figures will be revealed soon! These particular figures usually have prototypes and finished versions reveals pretty close together. And with the pre-orders less than ten days away, we should see the finished versions soon!

If these figures follow the trend of the others, they’ll be available online at these websites:

In addition, fans with a Japanese address can pre-order from Sky Town as well! Sky Town pre-orders will receive a special bonus. While it hasn’t been announced yet, it’s probably safe to bet that acrylic key-chains featuring the designs will be the bonus.

Grabbing the Other Figures

If you’d like to have the full collection, you’re in luck! The others are still available on various shops.

She's a huge VOCALOID fan, a figure collector, and an all around nerd. Hoshi's been in the VOCALOID fandom since 2008 and has been a hardcore VOCALOID fan since 2013.
@VocaHoshi
Previous Into Starlight & Reload CD/DVD with AR Available!
Next Have Your Miku Dance with the Adobe x Hatsune Miku “MIKU DANCING FES” Collab!