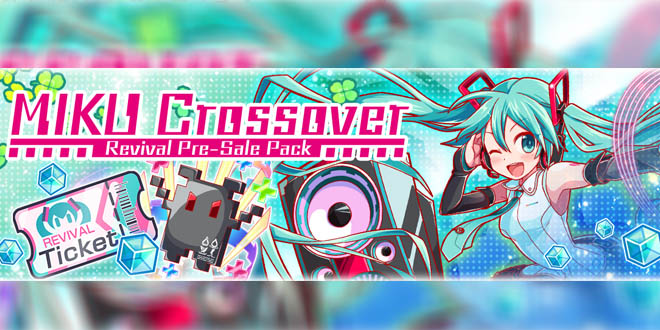 Exciting news for Crash Fever fans who play the global version: A Hatsune Miku event is coming next month! While there aren’t any details yet, a special pack has been released in the in-game shop for those looking to get the upper hand during the event.

The event seems to be going by the name “Miku Crossover” with the pack being centered on the revival of the crossover. At this time, we’re unsure if this means the event will be a revival of last year’s or if they’ll be reviving last year’s event and adding content from this year’s Japanese collaboration. The description of the special pack only says that more details will be revealed in the future so only time will tell!

The ticket can be used in next month’s Hatsune Miku Crossover Revival Hatcher, which features all Miku Crossover units previously released in Crash Fever. It allows one 10x roll of said Hatcher and every 3rd roll of the Hatcher guarantees 1 out of 8 selected crossover units.

The ticket will be available during the event as well but this pack gives it to fans at a discounted price.

Where to Get Crash Fever

She's a huge VOCALOID fan, a figure collector, and an all around nerd. Hoshi's been in the VOCALOID fandom since 2008 and has been a hardcore VOCALOID fan since 2013.
@VocaHoshi
Previous Support the 2nd Yuzuki Yukari Racing Crowdfunding Effort!
Next Megurine Luka 9th Anniversary Album Sale on KARENT