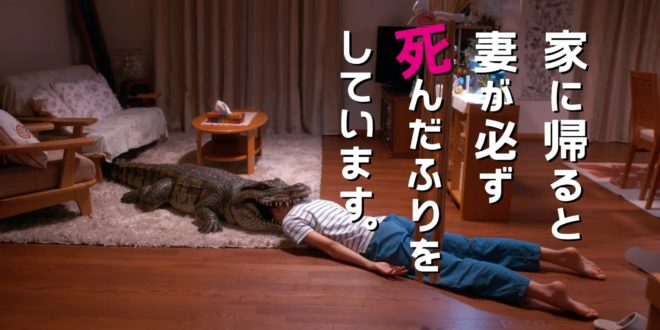 Movie Based on a Classic VOCALOID Song Announced!

Ever since ほぼ日P (HobonichiP) created and uploaded the Hatsune Miku song “家に帰ると妻が必ず死んだふりをしています / Ie ni kaeru to tsuma ga kanarazu shinda furi wo shite imasu” – commonly translated as “When I return home, my wife always pretends to be dead.” – it quickly became one of the biggest VOCALOID meme songs with countless fan-made PVs, covers, parodies, and even an official comic.

Apparently, director Toshio Lee also wishes to create his own take on the classic VOCALOID song in the form of a live action movie adaptation! The film stars Nana Eikura as Chie, the housewife who’s always finding new and more creative ways to fake her death, and Ken Yasuda as Jun, her troubled husband who struggles to understand why his wife of three years is suddenly behaving like this. Other confirmed cast members include Ryohei Otani and Sumika Nono, and screenplay was handled by Fumi Tsubota.

Commenting on Eikura’s acting, Director Lee calls her “genius” in how she portrays the lovable housewife, Chie, whom he says no one will be able to help falling in love with when they see all her different ideas for how to die, all while keeping her reasons for doing so a secret. Being a novice at filming death scenes, Lee would experiment through trial and error with the cast on various pretend death scenes for the film’s production, paying especially close attention to the famous eaten-by-an-alligator scene.

Eikura herself admits that she had a rough but fun time acting out all those pretend death scenes. She also describes Chie as a woman who loves and cherishes her husband, albeit with an odd way of expressing it. She believes that this is a film that anyone, regardless of their thoughts on married life, can all enjoy.

Yasuda also complimented on Eikura’s superb acting, and praised the great job that the makeup artists and clothing designers did to dress Eikura up for all those various fake death scenes. His personal favorite scene was the aforementioned alligator one. He was also pleased to be given the chance to act side-by-side with Eikura again.

Finally, the film’s producer, Yasushi Miyamae, thanked the cast, the director, Kadokawa Pictures, and everyone who supported the film’s production on social media for making it possible. The film almost didn’t happen due to actors who quit their roles, but after re-casting and re-shooting, it is finally complete, and ended up an even better film than before.

Hello! You can call me Marumain, and I serve as a translator between VNN in English and VNN in Japanese, translating articles between the two languages. I love pretty much every Vocaloid, though I consider MAIKA to be my favorite!
@MarumainElectro
Previous Kizuna Akari Wins Best Creator Tool in the 29th Vector ProRegi Awards!
Next Hatsune Miku x Crash Fever Crossover #2 Begins!

“BUNRAKU Beyond” Event Has Been Cancelled!