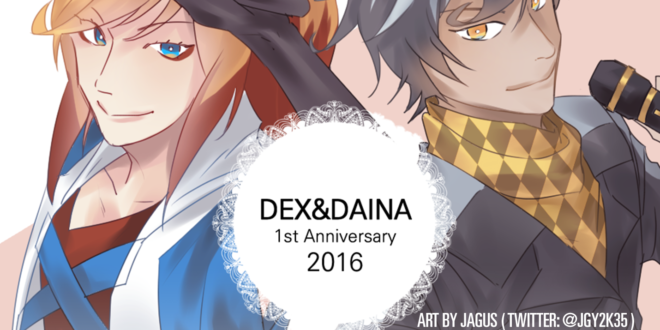 On this day last year, the much anticipated American English VOCALOIDs DEX & DAINA were finally released after a bit of waiting on the go-ahead from YAMAHA. Fans were delighted to see these VOCALOIDs come into the spotlight, but never would we have imagined that these two would go so far in such little time. So today, we’re celebrating the first birthday of DEX & DAINA by looking back at the past year and how much these two VOCALOIDs have grown.

EmpathP and Kenji-B promoted DEX & DAINA as much as they could and, as a result, the two were very anxiously awaited. Fans would tune in to live streams for all of the DEX and DAINA updates and, after much anticipation, the two were released with much celebration.

EmpathP and Kenji-B made several demos featuring the two, some of which were released while one stayed hidden until recently when the VOCAMERICA Official Soundtrack was released.

Fans grabbed up DEX & DAINA, and the two did very well for English VOCALOIDs. But their release was only the beginning of their rise.

DEX & DAINA have seen their fair share of popular songs. While none have hit an incredibly high mark, many have seen relatively high success when compared to other English VOCALOID songs.

In addition to popular songs outside of those made by EmpathP and Kenji-B, there’s also one song that blew up not only in the VOCALOID fandom but also crossed into the Undertale fandom as well. “Secret Garden” marked the first song in a series of Undertale inspired VOCALOID originals, and it grew incredibly popular very fast.

In addition to using DEX as the voice of Sans, it also uses CYBER DIVA and DAINA for the female vocals.

This is likely one of the most viewed English VOCALOID songs in existence.

And, of course, you can’t mention DEX & DAINA without VOCAMERICA! The Western VOCALOID Concert project is one of EmpathP’s biggest projects and features the two birthday VOCALOIDs as the headlining acts. The two received merchandise and, of course, got to perform on stage for fans! The first concert went incredibly well and people are excited for the next one.

Within the first year of their release, DEX & DAINA have accomplished more than a lot of VOCALOIDs ever do. The two aren’t as successful as many other VOCALOIDs but, at the same time, they’ve seen a huge deal of success when compared to most Western VOCALOIDs. And their success is bringing success to other Western VOCALOIDs as well. As the two continue on their VOCAMERICA path and people continue to use them, they’re sure to keep doing well.

Hopefully by this time next year, DEX & DAINA will be even more popular. So let’s continue to support them for years to come!

Last week, we invited fans to submit original works to celebrate this special occasion! We received quite a few entries and all of them were absolutely amazing. Thank you everyone for participating! You can find all of the submissions below.

Thank you to everyone who’s participated in the first year of DEX & DAINA’s VOCALOID life! And a huge thanks to all of the content creators who let us feature their work. We look forward to doing more aniversary articles in the future and covering the milestones of all types of vocal synthesizers. So please continue to follow us on this journey of vocal synth evolution. And, as always, stay tuned to VNN for all your vocal synth news and info!

She's a huge VOCALOID fan, a figure collector, and an all around nerd. Hoshi's been in the VOCALOID fandom since 2008 and has been a hardcore VOCALOID fan since 2013.
@VocaHoshi
Previous Snow Miku 2017 Street Car Now Open For Preview in Sapporo, Figma and Nendoroid on Display
Next Hatsune Miku V4X MMD Model by Digitrevx Now Released