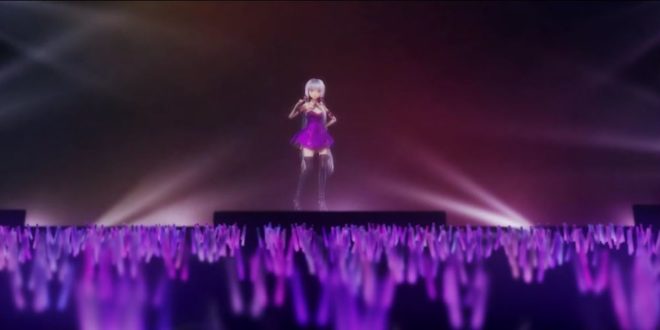 The Quadimension Live Tour concert was held on December 30, 2017, at the Shanghai Mercedes-Benz Arena, making for a sensational first full concert for Stardust! For those who could not make it to the show, or those who aren’t satisfied with just owning the official album, we have some great news: you can now bring the experience home on Blu-ray! 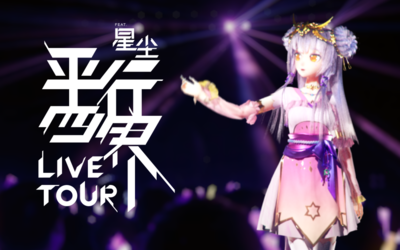 Note: It is always recommended to use a forwarding service when purchasing from Taobao

If you have the means to purchase the Blu-ray, but are still on the fence about whether or not it is for you, remember that you can listen to full versions of many of the featured songs on Stardust’s official Bilibili and YouTube channels, and elsewhere online, before deciding if you would like to see them performed live!

Not only will owners of the Blu-ray be able to see Stardust perform in full 3D models of many of her official designs – such as her default outfit and bikini design – but they will also be treated to seeing her performing in her unicorn-like D!scolor outfit, inspired by the illustration from Hanasa, which you can see below.

As for her other models, they are also now available on Quadimension’s Taobao page in acrylic figure stand form, as we have previously seen! See below for pictures and links to the product pages for each figure stand as well as other official merchandise! 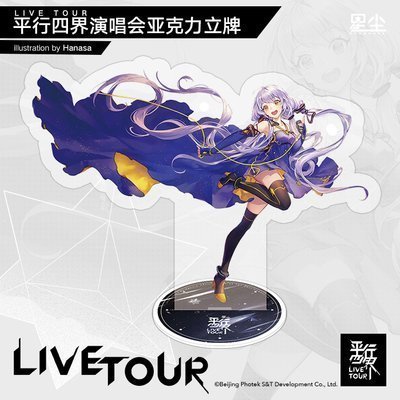 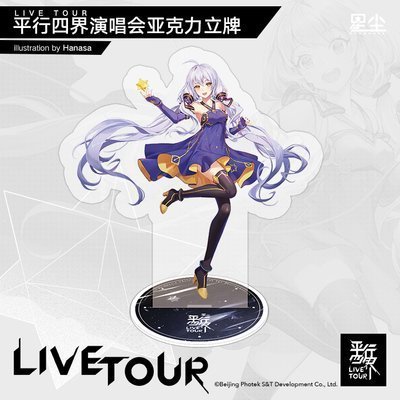 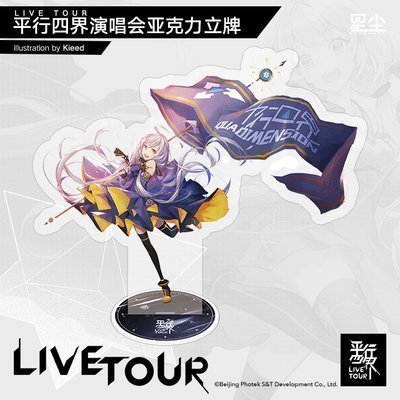 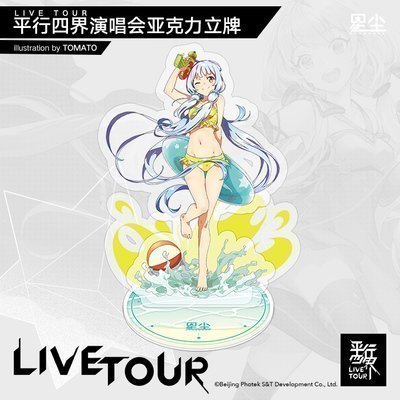 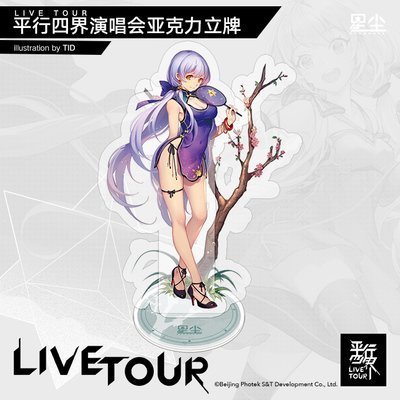 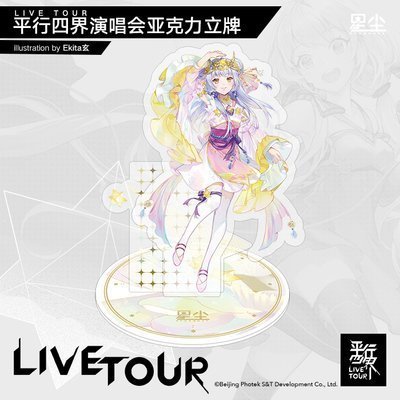 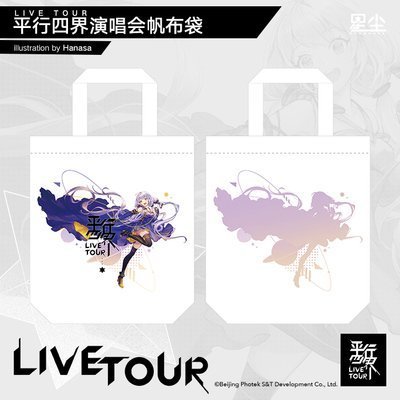 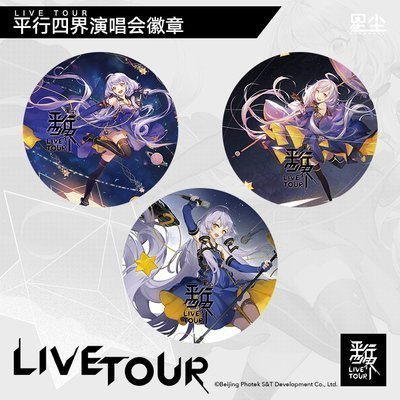 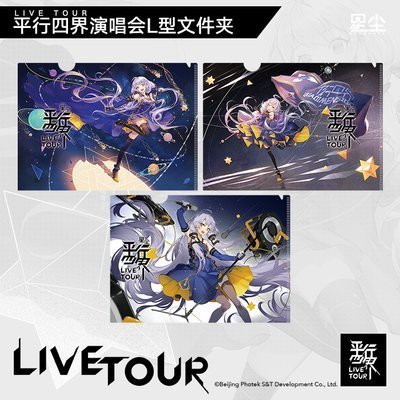 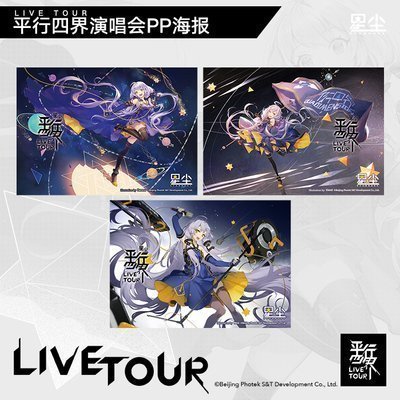 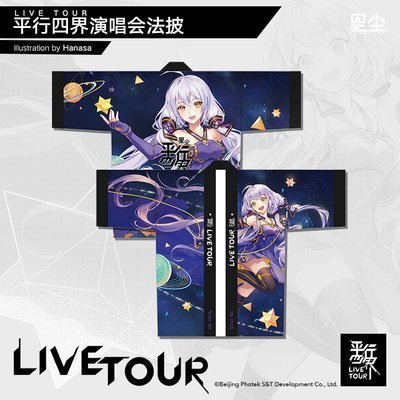 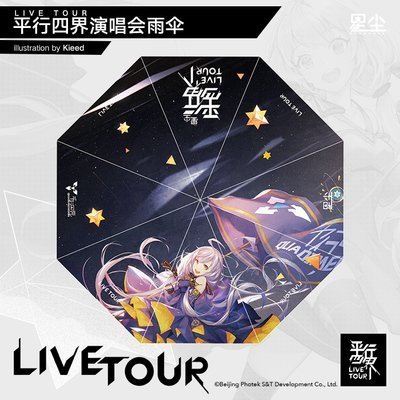 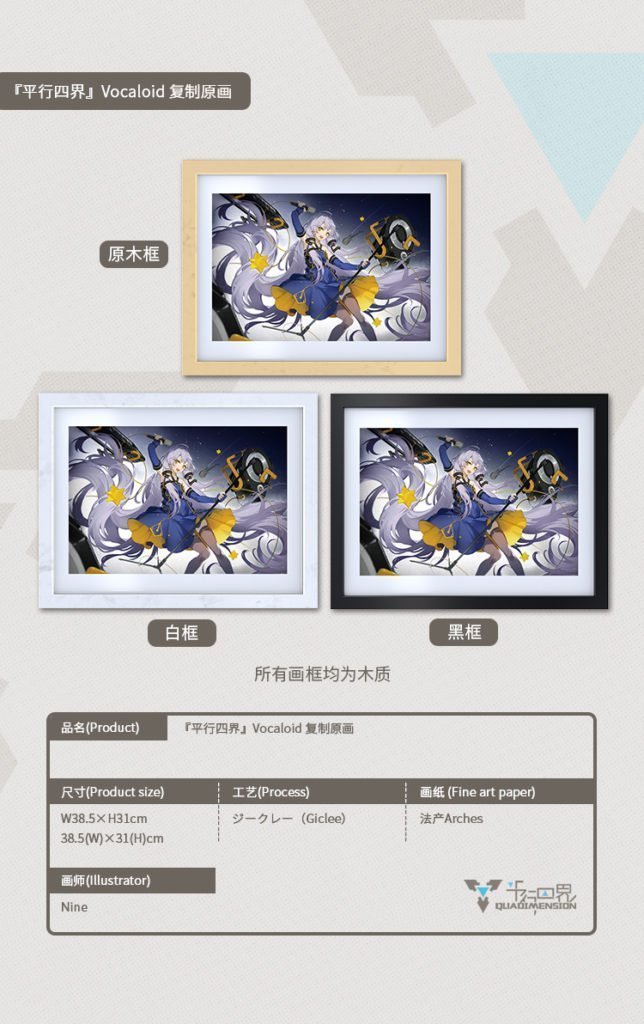 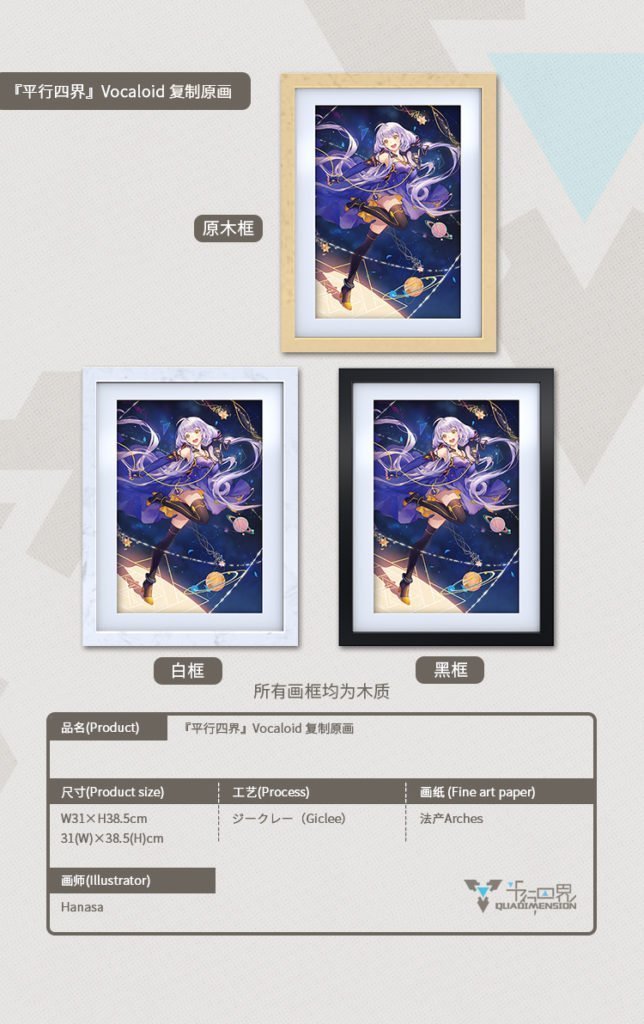 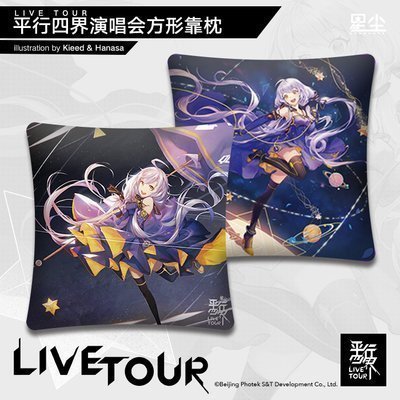 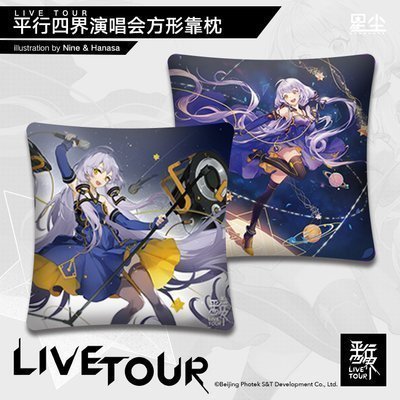 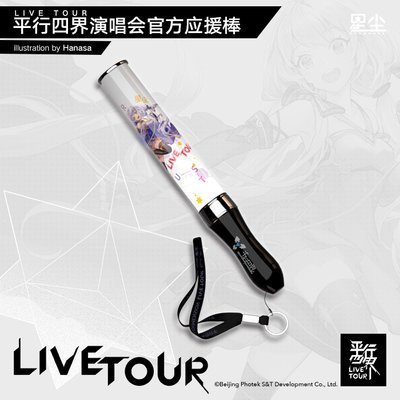 Finally, Quadimension created a special digest video with Touch Music to give fans an idea of the work that was required to put the concert together, a little about themselves and their philosophy for VOCALOID music creation, and what they hope to see for the future of the VOCALOID world. 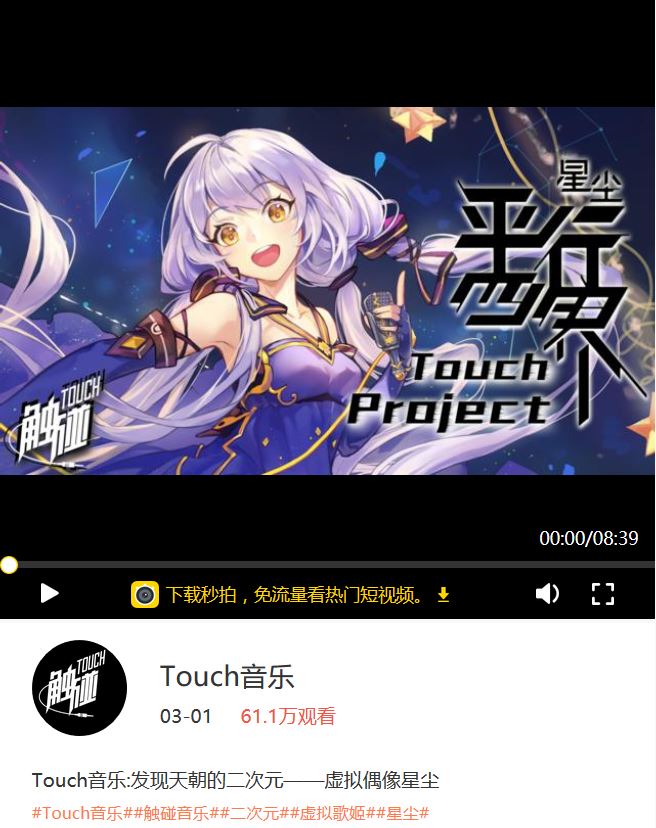 You can watch the video on Weibo here, and watch it on Miaopai here. Below is a summary of some of the main points covered:

Right off the bat, Ddickky explains that for people in the music business, it’s not just about releasing albums; it’s also every musician’s dream to conduct live concerts featuring their music. Quadimension’s focus isn’t so much about creating and promoting a virtual idol, but rather to create all-original music and musical experiences. They intended for this to be their chance to showcase the works of their own individual producers.

However, that doesn’t mean that the process has been easy; far from it. The Quadimension staff was so short-handed that they even had to cut, paste, and hang their own promotional banners and advertisement boards themselves. They knew full well that this was something that they have been longing to do, so the moment they announced on Weibo that they would be holding a concert sometime in 2017, they knew that they were “stuck,” and thus the pressure was on to put together their first ever live concert before the year’s end.

Quadimension enlisted help from professional dancers to come up with Stardust’s choreography. The songs from ONO (小野道) in particular are easy to dance to in concert, and allowed Stardust to perform with a lot of energy on stage. As for her 3D models, they selected four different designs that were based on popular artwork for Stardust, taking ones that both Stardust’s fans and Quadimension themselves happen to really like, and turning them into concert models.

Quadimension started out as a fan group who created works for Luo Tianyi. It wasn’t until after they were several years old and had come up with their own ideas and methods that they started development of Stardust. Since they were called Quadimension, they enlisted the help of a talented artist who drew a girl with four ponytails. At the time, they were not intending to create their own virtual idol. But once they decided to go through with it in the end, they made some alterations to the girl’s look, and thus they arrived at Stardust’s final design.

When asked if they like Stardust, Chalili responds “Of course I like her; I’m her singing voice!” The artist, Chí, calls Stardust adorable and finds her beauty to be mesmerizing. Zeno explains then when he first heard Stardust’s voice, he knew that he wanted to create songs with her, going as far as to say that she has the power to give people hope. EDR compares his feelings for Stardust to a parent’s love for a daughter: the kind of pure love that one doesn’t ask to be rewarded for, and is impossible to reciprocate.

They all had a hand in creating the first official album to feature Stardust from the ground up in the areas of music, illustrations, and promotional movies. They also describe the work environment at Quadimension as a splendid one, filled with people who are truly talented and passionate in their respective trades, and who all cooperate well thanks to their shared love of this special girl named Stardust. They especially sing high praises for Ddickky and all the hard work that he has put into developing Stardust and growing the company.

The music producers of Quadimension describe how working with virtual idols has been much more enjoyable for them than human singers for various reasons. Whereas working with human singers requires the musician to fret over how best to represent the performer and adjust their music to them, it’s the reverse when working with virtual idols like VOCALOIDs, who can better represent the intentions and essence of the musician and their music. They thus feel more faithful to themselves when creating songs with VOCALOIDs who will sing exactly how the musician intends for them to sing.

Despite some shortcomings, like having only created a mere 60 happi coats to distribute, the concert was a great success. Quadimension felt especially proud of the fact that even though they never set out with the goal of creating and promoting a virtual idol in mind, intending instead for this concert to be about showcasing themselves and their music, they still managed to create something that VOCALOID fans truly loved and enjoyed.

With the advent of VOCALOID in the world, the staff at Quadimension hopes to see more and more creative minds join in on the phenomenon, all writing the types of music that they want to write and staying true to themselves. They wish to see fans come to understand that there is no special trick or secret to becoming a VOCALOID producer; as long as you have the will, as well as the love, it’s possible for anyone to create music with VOCALOID. The important thing is to not just listen, but to also participate by writing your own songs, and never being afraid to share them with the world.

Quadimension is also extremely pleased to see the growth of the VOCALOID community in China, both in the fan base as well as in the producer community. In the past, they have been asked to produce songs in Japanese and English, something that they were neither able to nor interested in doing. Ddickky expresses that he would rather see Chinese producers focusing on writing Chinese songs, their specialty, pointing out how Japanese producers have made Hatsune Miku the worldwide phenomenon that she is, and the face of our culture by having her sing almost exclusively Japanese songs. He thinks that China has been comparatively late to the game, but nonetheless believes that this concert was a great success and proves how much they can still accomplish. Ddickky promises that Quadimension will continue to work hard to create more music, release even better albums, and conduct even more splendid concerts, fulfilling not only their dreams, but the dreams of so many other fellow musicians who have supported them for so long.

Hello! You can call me Marumain, and I serve as a translator between VNN in English and VNN in Japanese, translating articles between the two languages. I love pretty much every Vocaloid, though I consider MAIKA to be my favorite!
@MarumainElectro
Previous Enter the Yamaha x nana music Contest to Win a VKB-100!
Next Hatsune Miku x KODO Taiko Special Live 2018 Announced For June 2~3rd