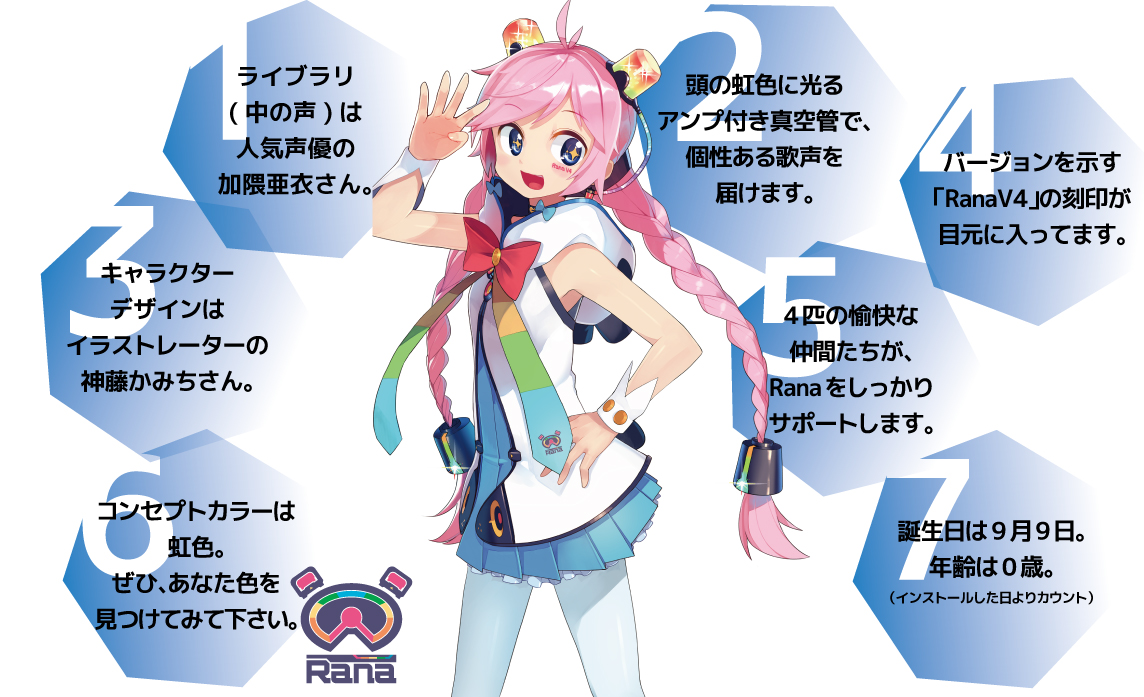 In the past Vocaloid Rana was available through a subscription based magazine that was only available in Japan. However she is getting a V4 upgrade and they are making her available to everyone. She will be released on December 1st.

As shown above she has had some very minor changes to her design, which include a few changes in the patterns of her jacket and the ribbon around her neck. Along with this, she now has an extra pet named “Kou-Chan”(resembles a blue and white bird) bringing it to a total of four. The others are “Sacchan/Sakiko” (resembles a square radio), “Morio Shishou” (resembles a pink panda) and “Jasmine Kenkyuuin” (resembles a green puppy).

They will be holding a song campaign for Rana via Twitter titled “Rana V4 Congratulations Song”. For those who own the software, you can participate in the campaign by making an original song for Rana. Songs can be posted on Yamaha’s Twitter “@vocaloid_yamaha” with the hashtag #V4_Ranaおめでとう, and you can also follow Rana’s official Twitter. The campaign will begin on November 26, 2015 and end February 29, 2016.

The upgrade version of Rana (for those who already own her V3) will be 5,400 Yen and the Limited Edition will be 10,800 Yen. Both of these copies will be Mac-compatible and download only, with no word on a physical release. You will also get a Rana V4 MMD model as well as a Chibi Rana model with your purchase.

You can find the full details and download page on the VOCALOID website. You can also find an English buyers guide on their website for those of you having trouble navigating through Japanese.