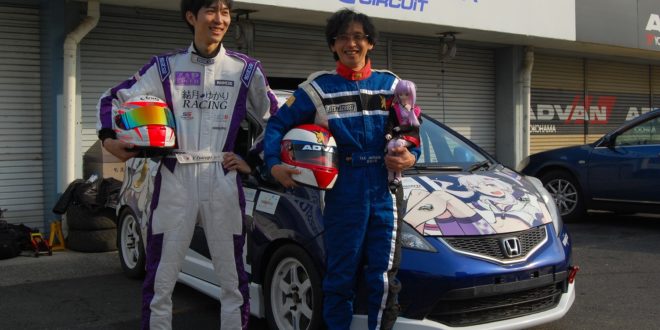 Readyfor Stories: Behind the Wheel of the Yuzuki Yukari Racing Project

Readers who have been keeping up with VNN have likely read at least one article about the Yuzuki Yukari Racing Project and the accomplishments made by its organizers. After an unprecedented success with its crowdfunding campaign on Readyfor, the Racing Yukari itasha has been able to compete in no less than six races in the 2017 Super Taikyu season, including the final round of the ST4-class in Okayama, and soon in the Motegi Championship Cup FIT Challenge on March 12th!

But have you ever wondered how the project came to be, and what is motivating the team? Earlier this year, Readyfor PR manager, Azusa Gotou, had a chance to sit down with the project organizer, Takahiro Watanabe (a.k.a. MazodoraP), for a special “Readyfor Story,” which are interviews conducted by Readyfor with the visionaries of the crowdfunding projects that they sponsored on their website. The interview went as follows:

Takahiro Watanabe is a professional race driver who competed in the Super Taikyu in 2009 and 2014. He is best known for pioneering the fusion of motorsports with anime character fandom, and plans to further realize that vision with the Yuzuki Yukari Racing project.

Gotou: Before starting this project, you originally centered your activities around racing, correct?

Watanabe: That’s right. I really love cars and have been part of the racing world since 2000, more than 16 years ago. Then around 2010, I discovered MikuMikuDance (hereafter “MMD”) with my fellow racers and thought, “Whoa, this looks cool! I’d like to try it out too.” That’s how I came into the world of MMD as well.

Gotou: So, did you start out by animating cars in MMD?

Watanabe: Actually, I didn’t. Although there were all sorts of car models available in the program that I really wanted to try animating, I felt that they would be too much of a challenge for someone who didn’t even know how to make basic animations. So, instead, I got my feet wet by making videos of Hatsune Miku dancing.

Gotou: Could you tell us a bit about how you got to the point that you’re at now?

Watanabe: For various reasons, I actually had to distance myself from racing in 2010. It was around that time that a friend of mine taught me how to use MMD, and I spent my days creating MMD videos and uploading them onto Niconico. Racing fans, VOCALOID fans, and Hatsune Miku fans alike all watched and enjoyed my videos, and I came to form real-life friendships with many other individuals in the MMD and VOCALOID communities. In some of our conversations, we talked about our love of racing as well.

Gotou: So how did MMD tie in to your current endeavors?

Watanabe: It was in 2014 that I was invited by an old racing friend to join his team and compete in the Super Taikyu that year. We needed money, of course, so my friends in the MMD community got their other friends together, and they all offered to chip in. But due to some unforeseen circumstances, we ended up needing an awful lot more than they could provide. It just so happened, though, that an acquaintance of mine at VOCALOMAKETS contacted the CEO of AHS, who then offered to cover the remainder of the cost of forming our racing team! After it was settled, he suggested that my car could use some decal, and that was how Yuzuki Yukari came to be the center point of my race car.

“The Yuzuki Yukari Racing Project was something we created together with the fans.” 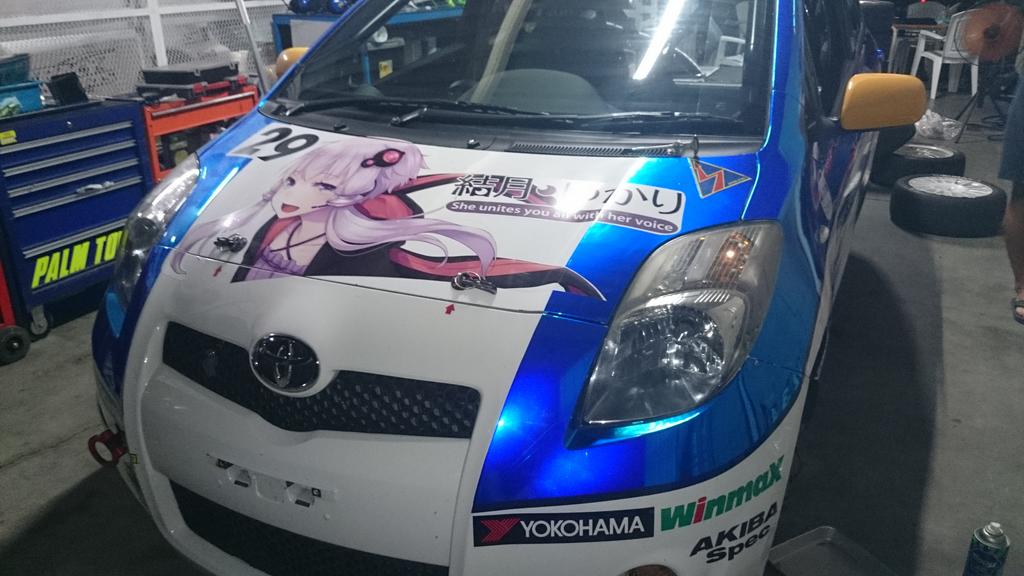 Gotou: Do you think you made a lot of new fans thanks to that moment?

Watanabe: I think so. A buddy of mine filmed me racing in my Yuzuki Yukari car and posted the videos on Niconico. From those videos, I saw comments like “I wanna see Yukari-san race some more!” and “I just gotta watch that again!”

Gotou: Did you have any initial reservations about starting the crowdfunding campaign for this year’s race?

Watanabe: We considered turning to crowdfunding this time around because we needed the funds to put together a brand-new race car. I spoke about it with management, and they suggested that we could entice donors by offering up return rewards. That idea appealed to me because I, too, wanted to have the opportunity to create goods that many people (myself included) would like to own, and create spectacles that many people would like to see.

Gotou: How do you now feel about starting the crowdfunding campaign? Did you imagine that you would reach your initial goal after just four days?

Watanabe: I knew that people were making a lot of noise about the project, but that didn’t make its rapid success any less surprising! I figured that on top of the racing fans who supported me back in 2014, there were now many Yuzuki Yukari fans lending their support as well!

Gotou: What approach did you take towards figuring out what kind of return rewards would effectively entice people?

Watanabe: I first looked at the type of racing goods that are already in existence and then considered what I could add to them that would get people saying, “I want to own THAT!” or “I want to see them make THAT happen!” My motto became “Create things that both the people, and you yourself, would want to own!

Gotou: What proved to be the biggest challenge of the crowdfunding campaign?

Watanabe: I was asked a lot of questions by people who didn’t know much about the crowdfunding system, such as “Once you reach your goal, are you just going to pull the plug?” I probably could have avoided those by explaining things better from the start.

Gotou: Was there anything in particular that made you feel glad about starting the crowdfunding campaign?

Watanabe: There is: that we were able to create something that we all truly want!

Gotou: So you were motivated by the premise that everyone could get involved and create something special together, correct?

Watanabe: Correct. With everyone’s involvement, I believed that we could create amazing things. Together.

Gotou: I, for one, am very glad that you decided to participate.

Watanabe: Well, I now have to actually compete in all the races like I promised. Reaching ¥6,000,000 would already get me well on my way, since the initial ¥2,000,000 goal would have left too many expenses uncovered.

“I love Yukari, and desire nothing more than to paste her decal on all my race cars so that we can always race together!“ 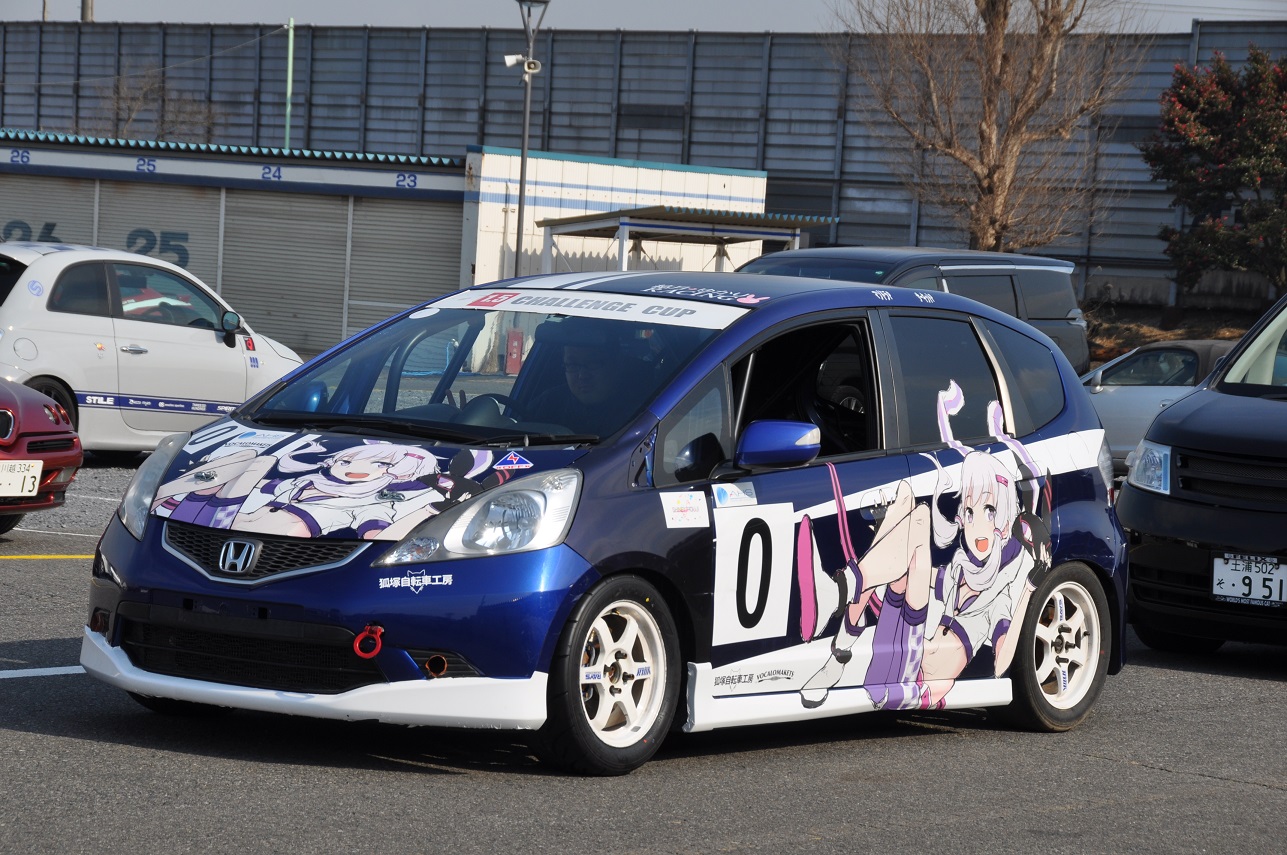 Gotou: Where do you plan on taking the Yuzuki Yukari Racing Project now?

Watanabe: First of all, I would really love to keep it going, not so that I can make big money to compete in more races, but because I want to continue accomplishing goals with the fans. If I could work together with more license-holders, then we could cooperate more and compete in regional races, enjoy great times together, and even help bring in fans who cannot make it to races on their own and have them enjoy the spectacle, too!

Gotou: Would that include any more videos to show?

Watanabe: Since the Super Taikyu can only be watched on satellite TV, I’d like to be able to shoot more videos of myself racing and broadcast them on Niconico again.

Gotou: If you could sum up what you find great about Yuzuki Yukari in just a few words, what would they be?

Watanabe: I think she’s amazing as both a VOICEROID and a VOCALOID, allowing me to create and upload videos like my recent one with her VOICEROID bank narrating our VOCACON activities! If I had more free time, then I’d love to be able to create more with her, but I got races to compete in and reports to write to sponsors. If only I could convey all that to Yukari-san herself! VOCALOMAKETS has truly raised her with all their heart, and I believe it shows.

Gotou: Do you have one final message that you would like to convey?

Watanabe: All my recent racing activities were made possible thanks to the support of my friends and, of course, Yuzuki Yukari. I want to convey that I love Yukari, and desire nothing more than to paste her decal on all my race cars so that we can always race together!

Gotou: Lastly, I understand that there are many things that fans would like to be able to see from you. Thanks to the advancement of social networking these days, it’s like you can directly show them anything that they’d like!

Watanabe: Indeed. This whole endeavor of mine was born out of the desire to give VOICEROID and VOCALOID fans what they want. “I want to see Yukari-san competing in races,” is the call that I seek to answer, and the spectacle that I aim to create and provide for fans.

For past coverage of the Yuzuki Yukari Racing Project on VNN, check out the links below!

Hello! You can call me Marumain, and I serve as a translator between VNN in English and VNN in Japanese, translating articles between the two languages. I love pretty much every Vocaloid, though I consider MAIKA to be my favorite!
@MarumainElectro
Previous The 8th Tohoku Zunko Stamp Rally Now in Full Swing!
Next Tohoku Kiritan Wins an Award!